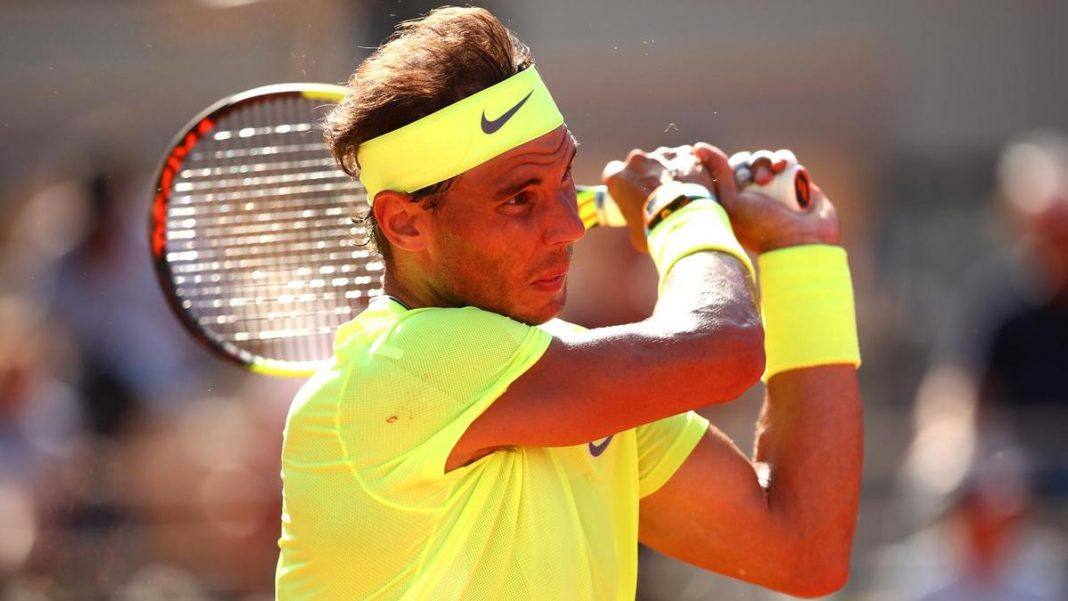 Rafael Nadal is determined to take on his rival Roger Federer at the 2019 French Open as he heads into the quarterfinals at Roland Garros. Any sign of injury from this season is in the rearview mirror as Rafa is striving for his lucky dozen titles.

Federer’s return to French Open clay is going so smoothly he still has not dropped a set in reaching the quarterfinals.

The 20-time Grand Slam winner eased through with a 6-2, 6-3, 6-3 win Sunday against unseeded Argentine Leonardo Mayer and is one match away from a potential semifinal — and a 39th career match — against defending champion and longtime rival Rafael Nadal.

Nadal won by the same score as Federer on Sunday, but he was at least given a little bit more of a test by another unseeded Argentine, Juan Ignacio Londero.

While Federer did not face a single break point in beating Mayer for the fourth time in four meetings, Nadal dropped his serve once — late in the third set — and saved four other break-point chances in his first-ever match against the quick-hitting Londero.

Serving at 40-30 in the eighth game of the third set, Nadal was given a time violation warning, which he felt was the correct call made in the wrong circumstances because of persistent talking from the crowd as he prepared to serve in that game, and during his previous service game.

“Ok, I agree with you but (they are) still talking,” Nadal told the chair umpire, referring to the crowd.

Nadal held with an ace for 5-3, and then broke Londero for the sixth time to clinch victory.

Federer won his only French Open in 2009, the year Nadal lost to big-serving Swede Robin Soderling in the fourth round.

The 37-year-old Federer is now into a record-extending 54th Grand Slam quarterfinal overall, compared to 38 for Nadal, which is fourth all-time. Federer also became the third oldest man to reach the last eight at Roland Garros.

“Of course the hope was to go deep and I’m in the quarters now, so I’m very, very happy at this point,” Federer said. “I served super well and Leonardo had trouble returning. I was able to put pressure on him and I’m very happy with my performance.”

After dropping his serve to lose the second set, Mayer angrily swiped the ball away and was given a code violation warning for ball abuse.

Federer was looking so clinical and assured that the crowd at a sun-baked Philippe Chatrier groaned in disbelief when he missed an easy-looking forehand volley at the net, early in the third set.

It was the second time Federer has beaten Mayer at a Grand Slam — the other also coming in straight sets, in the first round of the U.S. Open in 2015. That was also the last year Federer had played at Roland Garros, before skipping clay entirely until returning to the surface this year.

Four years ago, Federer lost in the quarterfinals to Swiss countryman Stan Wawrinka in straight sets.

He next faces either Wawrinka or rising star Stefanos Tsitsipas, who beat Federer in the fourth round at this year’s Australian Open.

They were playing their fourth-round match Sunday on neighboring Court Suzanne Lenglen.

The 31st-seeded Croat next faces Czech teenager Marketa Vondrousova, who reached her first quarterfinal at a major without dropping a set. The 19-year-old Vondrousova beat 12th-seeded Anastasija Sevastova of Latvia 6-2, 6-0 in just 59 minutes.

With a grin, Federer said Sunday: “I thought that was funny.”

Williams was so eager to get her media obligations over and done with Saturday evening that she met with reporters a little more than 10 minutes after her match ended — much sooner than usual.

So Thiem, who was supposed to speak about his third-round win, was told to make way . He called that “a joke, really.”

“I don’t know what went wrong, but something went wrong for this to happen,” Federer said after beating Leonardo Mayer in straight sets. “Maybe they should have kept Serena still in the locker room, not waiting here in the press center. I don’t know exactly what happened. I understand Dominic’s frustration.”

For Thiem, “it’s just about, ‘How in the world did this happen?’” Federer said. “I don’t think he’s mad at Serena or anybody.”

Thiem, too, was finally able to laugh about the incident.

“We joked about it,” Federer said. “That’s why I’m very much aware of what happened, and that’s why we are laughing in the locker room about it now.”

Roger Federer booked his place in the quarter-finals yesterday as he cruised past Leonardo Mayer.

The Swiss star has not dropped a set en route to the last eight, where he takes on Stan Wawrinka tomorrow.

The pair are battling for the chance to take on Rafael Nadal or Juan Ignacio Londero in the semi-finals.

Parisian supporters are dreaming of a Federer vs Nadal match-up later this week.

But 20-time Grand Slam winner Federer refused to think about the possibility.

“I know you have to play a very tough match against Stan but what will your strategy be against Rafael Nadal in a hypothetical semi-final?” Federer was asked.

However, the 37-year-old was not keen on speaking about his long-term rival.

“I am not going to talk about that,” Federer said.

“Just because I am not there.

“But I will answer that question, very happily, if I am there.”

Meanwhile, Federer also explained his biggest challenges of remaining on the ATP tour.

“I think the big question for me is how do I handle travel and practice?” he added.

“Those sessions when there is nobody am I happy to go on the treadmill. I hope I can keep that up.”

Federer also blasted Serena Williams for the incident which caused Dominic Thiem to be kicked out of his press conference at Roland Garros.

“There must have surely been a misunderstanding or maybe they should have kept Serena still in the locker room, not waiting here in the press centre,” he said.

“I don’t know exactly what happened. I understand Dominic’s frustration. For him, it’s just about how in the world did this happen?”

Kei Nishikori, the best deciding-set player in the Open Era, may have lost deciding sets in the past, but he’s not doing it at Roland Garros.

The seventh-seeded Japanese won his eighth consecutive five-setter on Monday, denying home favorite Benoit Paire a place in the quarter-finals 6-2, 6-7(8), 6-2, 6-7(8), 7-5 to match his best showing in Paris.

In a match that was suspended because of darkness on Sunday night, the two resumed play at the start of the fourth, and the back-and-forth tussle continued under an overcast sky.

Nishikori had two match points in the fourth-set tie-break, but Paire saved them both in a nervy tie-break from both sides. In the fifth, however, Nishikori showed his deciding-set prowess once more, breaking Paire at 3-5 and again at 5-5 to make his third Roland Garros quarter-final.

“He almost had the match… I’m just happy the way I came back from 5-3, I think… I started playing much better from 5-3, playing more aggressive, using my forehand,” Nishikori said. “[It was] not easy after losing the fourth set 7-6. I had match point, and I could win in four sets, but somehow I lost the set.”

“It’s never easy to finish a match. Normally I’m supposed to lose in three or four sets. I was a little bit tight in the tie-break. It was the same for him. He made two or three double faults in the tie-break in the fourth,” Paire said.

“For me it was a little bit the same at 5-3. I made a good return game at 4-3, made a lot of winners. I don’t know what happened. For sure, it is not easy for me, is first time I am in the last 16 in Roland Garros. I can make a quarter-final. I can beat Nishikori, who is a very good player.”

The Japanese will next face 11-time champion Rafael Nadal, who dismissed Argentina’s Juan Ignacio Londero in straight sets on Sunday. Nadal leads their FedEx ATP Head2Head series 10-2, including all three matchups on clay.