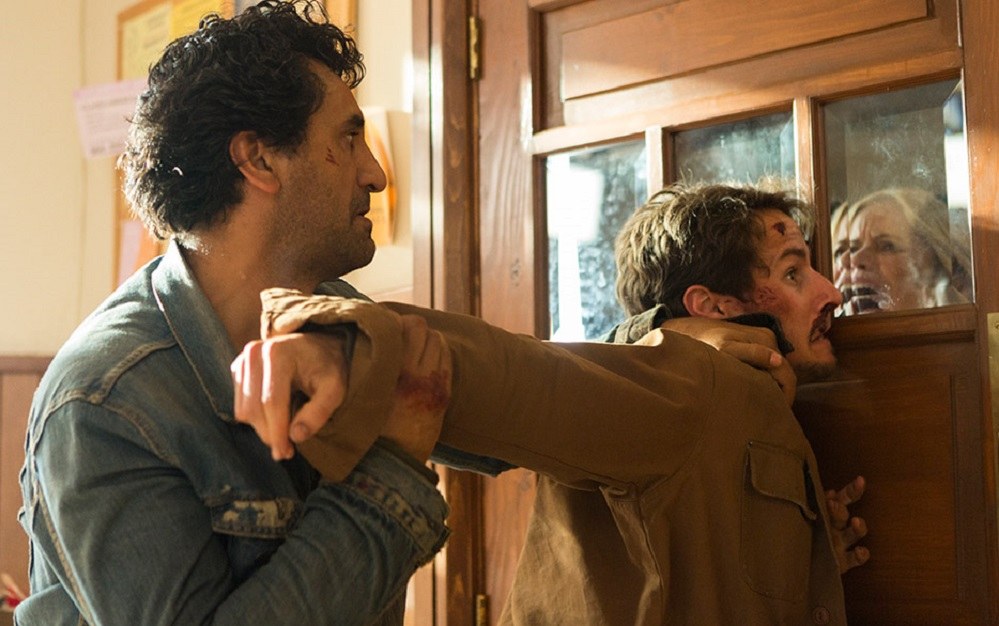 “Wrath” was a good title for episode 14 of “Fear the Walking Dead.” Personally, I would have gone with “Mean Streak.”

About time! You can scroll down to watch him unleash the Travis fury on those very deserving Americans.

To get the mundane out of the way, let’s talk about Ofelia. I would have preferred she just be killed off last night as opposed to watching her ramble around in the desert. I just don’t care. 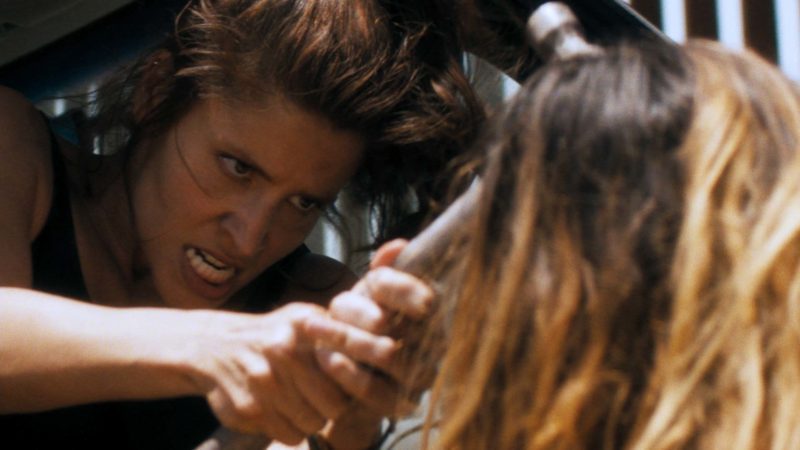 Maybe the “unofficial border control dude” who found her at the end of her journey turns out to be interesting. That’s the only hope for that plot line. Ofelia is not remotely interesting, so maybe this interaction will be a bridge to something better, whether she survives much longer or not.

And no, watching her kill a few walkers after her all too predictable car breakdown was not inspiring. 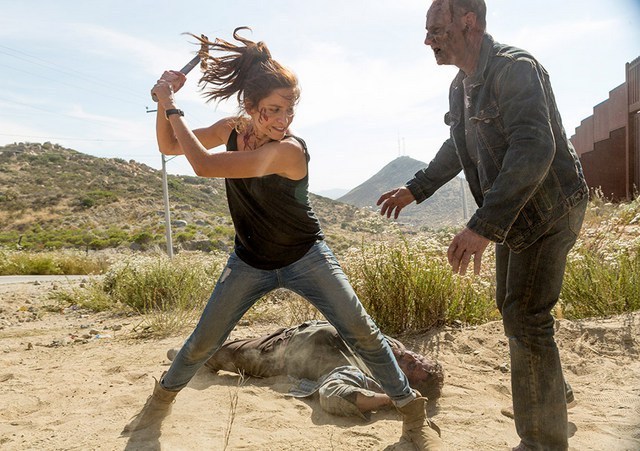 On to better things.

Nick decided to take the drug trade into his own hands. Kid is proactive at least. But it was too little too late. The drug lord has already made a deal with a fellow kingpin who has plenty of dope.

This new alliance hinges on them taking over the colony where Nick has been hanging out.

The drug lord does offer Nick the chance to leave and warn the others to get out before violence comes knocking.

Nick does just what the drug lord says and warns his lady Luciana that they all need to bounce. They tell Alejandro this, and he insists faith will keep their village safe.

Nick’s heard enough of this talk, but can’t call the guy out just yet since they are attacked by a patient who has pickled into a walker.

Bad timing! Especially for other patients at the makeshift hospital, who has his tongue and or nose bitten off. The victim’s wife then has her fingers turned into Cheetos by the zombie.

Then Nick had what I thought was a pretty cool zombie kill as he drove his fingers into the eyes of the walker until he penetrated the brain. Nice…..except for we’ve already seen that on “Game of Thrones” two seasons ago when Gregor took out the Red Viper with the same move, but better.

Alejandro was nice enough to feed the poor bite victims to the walkers on the outside as a sacrifice. Not himself, though. Even though he was bitten in the melee. 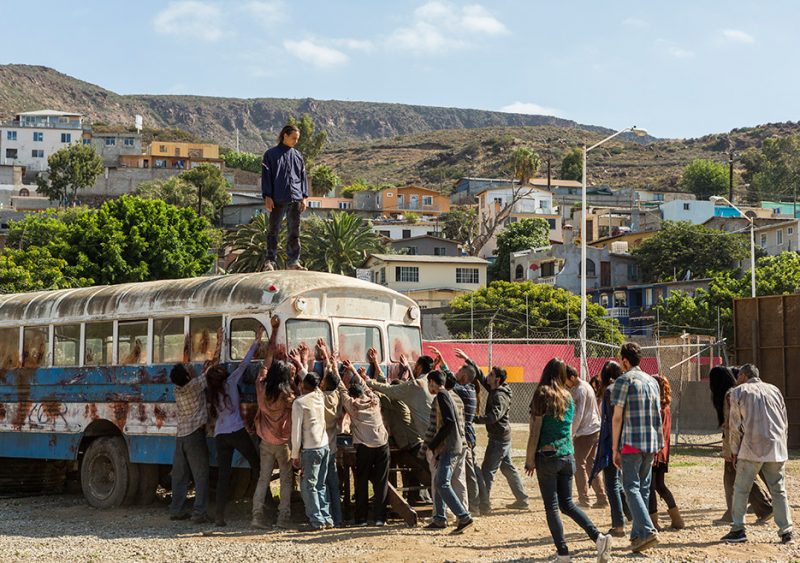 That lie is finally exposed when Nick calls him out, and he has to fess up. Luciano is deeply hurt by this father figure, and she helped promote his story from the beginning.

Turned out he was bitten by the dope fiend he was trying to save from the walkers back in the day. He says the lie did provide faith for all those who found refuge in the colony. He’s right. Without that bit of hope in a cure and a strong guy in the leadership role, their home would have already fallen apart.

That fact and the role faith played is undeniable, even to Nick.

Moving on to Travis and how he located that mean streak.

At first, it looked like it would be thirty minutes of Emo Travis whining to Maddie about abandoning Chris. Damn man, the kid left you. Unless you were willing to murder the crew he hooked up with, how could you stop him?

That’s the point. Travis should have murdered the crew of marauders when he could have kept his son with him.

Maddie tried to comfort him by saying he did the right thing. “Chris is safer with people who understand him.”

Crazy logic, but makes sense I guess in this jacked up world. And she’s just trying to talk Travis down off the mental ledge he’s walking.

It took no time for those jerks who went on the road with Chris, to show up at the hotel. They are among the group outside the hotel and appear to be injured and get a room since they need medical attention.

It looks like a trick to me all along. But they were shooting straight and even told Maddie that their driver had been killed in the wreck they were in.

She figures out that this Brandon and Derek are the two who were with Chris. She is terrified of what will happen to Travis if he finds this out, so she seeks advice from Victor.

He tells her to keep it a secret since his kid may be the only thing that keeps Travis going in this dark world.

Strand can relate after having lost his reason for living in Thomas.

That advice doesn’t matter once Travis spots the two cold-blooded pillagers. He demands to know what happened to Chris.

Pretty foolish to tell anything to the dad of the kid whom you let die. But these two cats were not the brightest. They tell Travis about the wreck but screw up the lie with the details. He catches them and locks himself in the room with them.

The beating commences as Travis sheds his good-guy soul. The guys admit to killing Chris after he was badly hurt in the wreck. 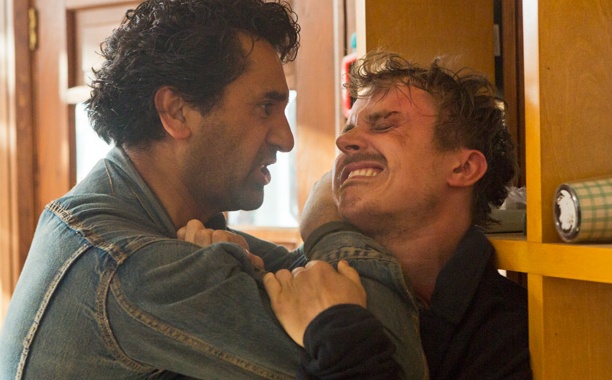 We get a flashback to the scene of Chris crawling out of the wreckage with a bone sticking out of his leg. He’s approached by his new pals, and with no thought whatsoever they shoot him in the head like an animal.

It’s not clear if Travis killed both Derek and Brandon, but he for sure killed one of them with the curb stomp to the head. We soon realize that he’s going for doubles as both are dead and another one in very serious condition.

Love the fact that Travis has turned the corner on being too nice. But this deal could cause him to be exiled from the hotel.

Violence was outlawed by Maddie and the other leaders when Victor was stabbed. And not only did Travis go off on the two bandits, but he also hurt one of the original hotel survivors by slamming the door on his face.

We’ll see if the same rules apply to family when the season finale airs next. 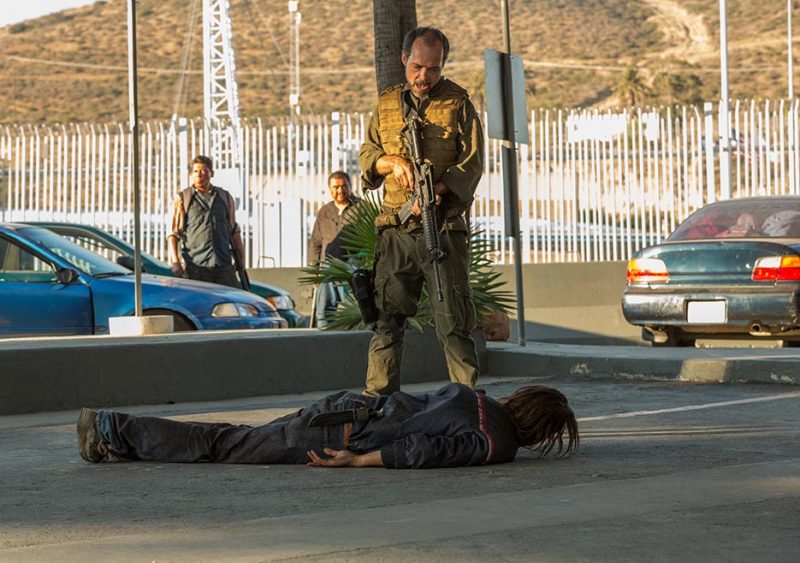 This has to rank up there in the top three episodes of FTWD. It had sheer violence mixed with the hurtful loss of a child. That child was a lost cause, but he was Travis’ own blood still.