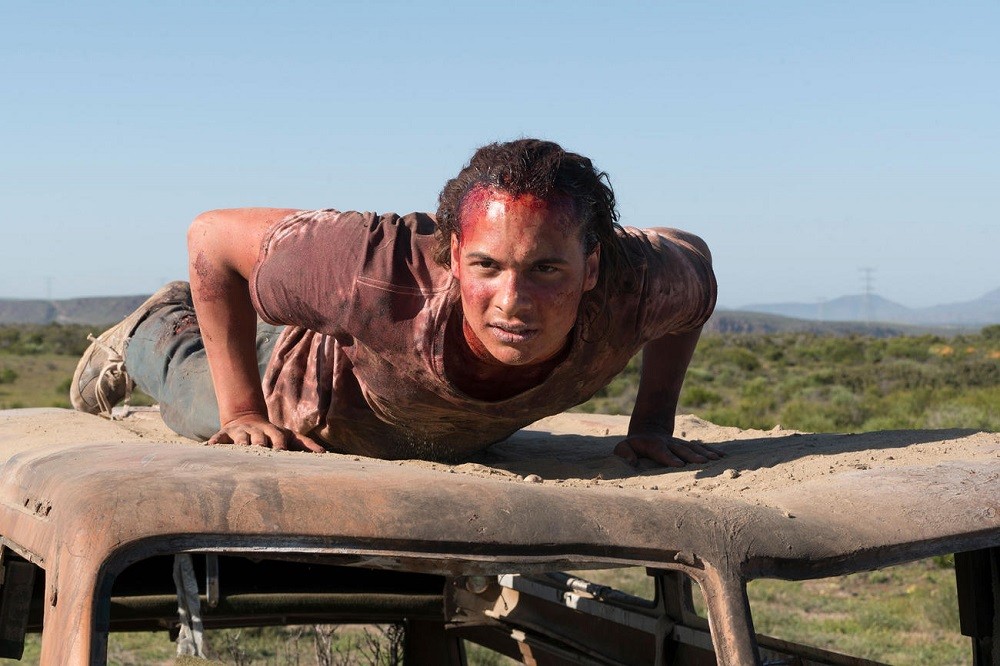 To kick off the second half of season two of “Fear the Walking Dead,” it was left up to Frank Dillane to carry the entire episode. His character, Nick, spent the entire episode on a solo journey that just about killed him.

Any fan of “The Walking Dead” will know this episode is a major nod to when Rick Grimes went on a long lonely journey with his horse to Atlanta in the first season of the show. Nick’s journey was even more fraught with danger and injuries. Rick at least got his introduction to the seeming unkillable Glenn in that one.

Tough going in a world turned upside down with zombies and no running cars available to make the trip easier.

Nick did his best impression of Survivorman as he used every resource available to him, which made the episode title right on target.

You’ll remember that Nick just wandered off from his family at the end of episode seven. Things got sideways on the ranch and Nick wanted to go out on his own to find another safe haven for the monsters he has grown fond of.

There’s a good reason for Nick’s drug problem. We see the kid in rehab during flashbacks this episode. He’s hooked up with a nice young lady that happens to be an addict as well.

Not the best way to start a relationship. As a matter of fact, I believe addicts are discouraged from dating each other since they usually drag one another down.

During Nick’s stay in the rehab facility, we see Maddie visit him, but he’s disappointed that his dad didn’t come. His disappointment got worse when Maddie dropped the news that his old man was killed in a head-on collision.

That kind of news can certainly destroy a young man. Mix in the fact that he didn’t even know about it when it first happened because Nick was secluded in rehab, and it made things even worse for the kid.

No time for too much sentimentality, because Nick wakes up from this little flashback to Sammy Sosa’s wife wailing on him with a bat. He apparently trespassed on her property.

Property laws are kinda fuzzy in this jacked up world, but baseball bats clear the air real quick. 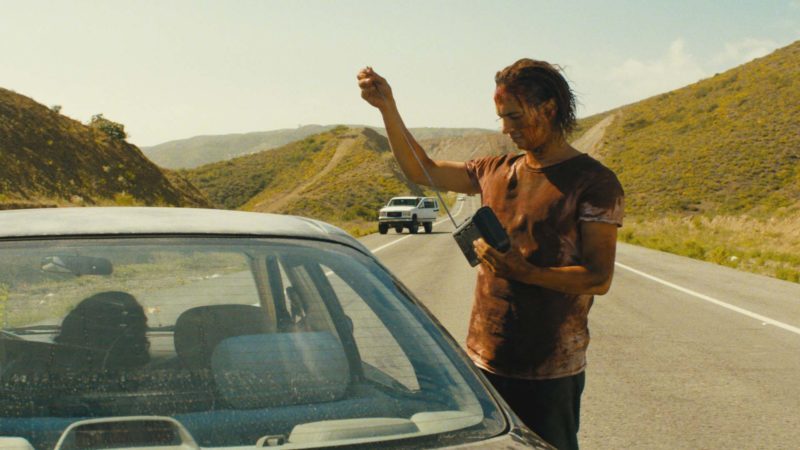 Once Nick is back on the road after being evicted by Mrs. Sosa, he runs into more trouble. A trio of thugs are scavenging wrecked cars just like Nick. But they are murderers who like the fact that the world has turned to shit. They murder an old dude who was stuck in his car and hadn’t appeared to turn yet.

They spotted Nick of course because he’s too reckless and fired a few shots at him before he got away into the brush.

RELATED NEWS
'The Walking Dead' 605: Now Alexandrians Gets A Real Taste Of Life

That lead to some desperate moves that entailed him trying to eat the innards of a cactus and of course drinking his own piss in the desert. Rehab was tough, but Nick was really going through hell now.

Still, his best skill lies in his ability to survive. He is the cockroach of this series so far. 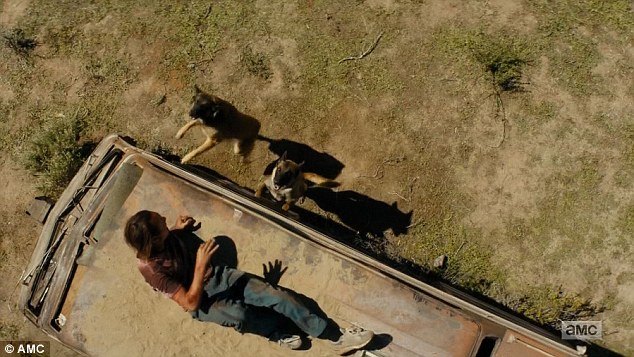 PETA probably didn’t care for the wild dogs being eaten by the pack of walkers. But the animal rights group will have a hard time shaming the zombie community, which has no conscious at all.

The zombie pack did save Nick from being trapped by the two dogs, and then he just blended in with them as they moved ahead. 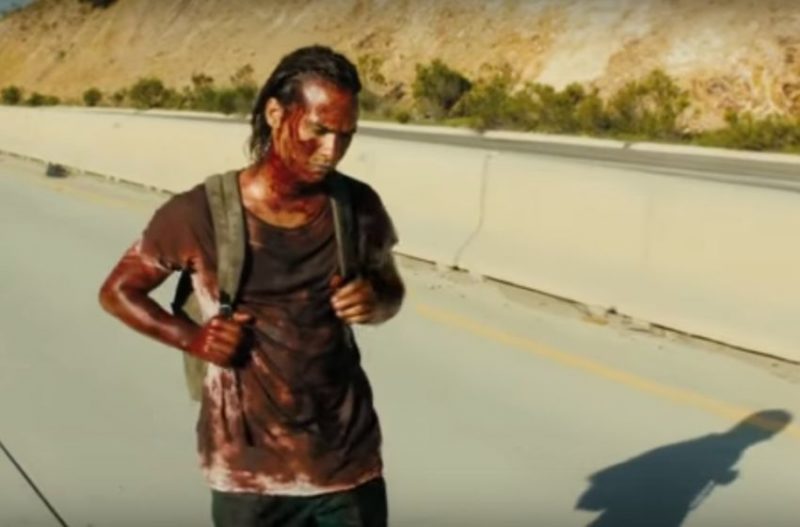 Safety in numbers I guess. At this point, Nick is more like the walkers than his fellow humans.

Nick really tested his luck when his pack of zombies ran into the trio of killers he met earlier. They took head shots on his dead gang, but Nick hung in there among them like a champ / nutcase. 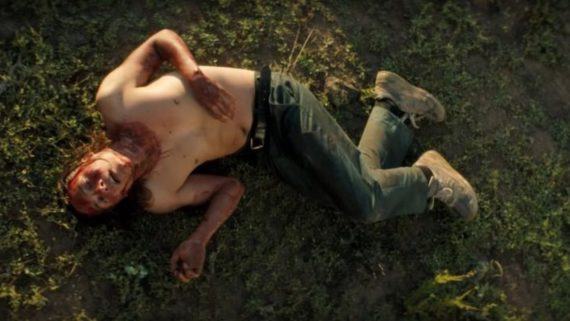 The leader of the trio recognized Nick and went to reload to kill him. But he got distracted just enough by this human blending in with the rotting riff raff, that he got eaten alive.

Only one of the murderous trio got away. 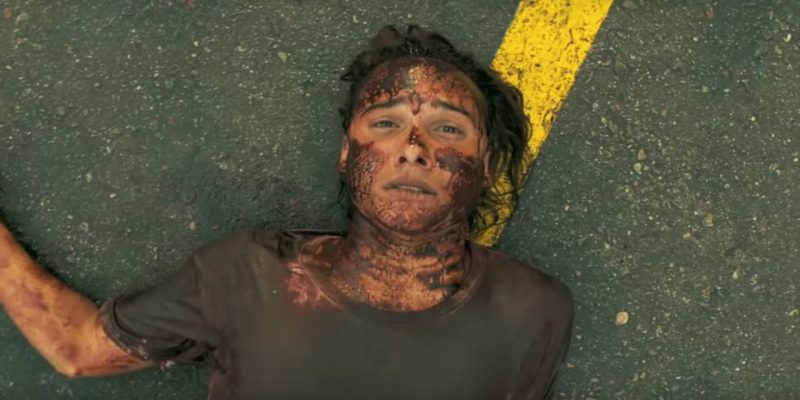 At this point, Nick is gassed. Drinking urine will only get you so far.

It looked like another group might swoop down to save him after he dropped to the ground, but the female leader just let him stay down.

Nick did manage to continue forward after a rain storm provided a wake-up call and some much-needed hydration. He wound up at an abandoned beauty salon, and the good guy trio found him there and offered help. 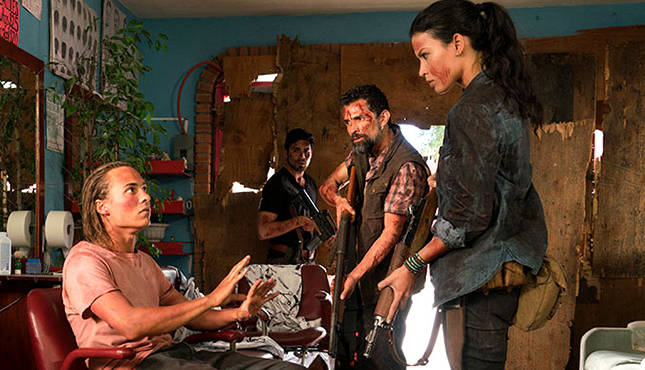 This group has a doctor on staff (over and under on the doc’s life span is three episodes), and he helps Nick with his bum leg from the dog attack. 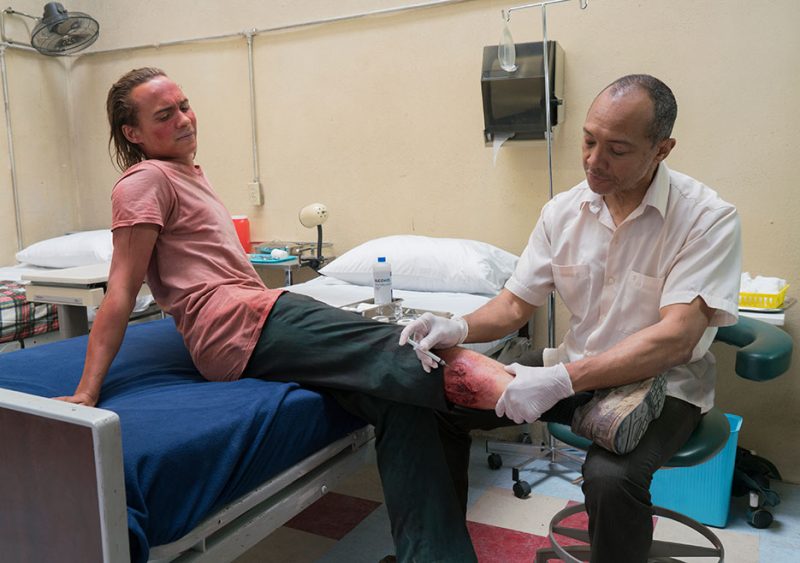 When Nick does get to go outside with the doctor, he sees a bustling community that seems to be doing well.

It looks like a common flea market type environment and the people seem happy.

So you know what that means. Disaster is headed for this peaceful refuge. No place is safe in the Walking Dead universe…in either FTWD or the original. 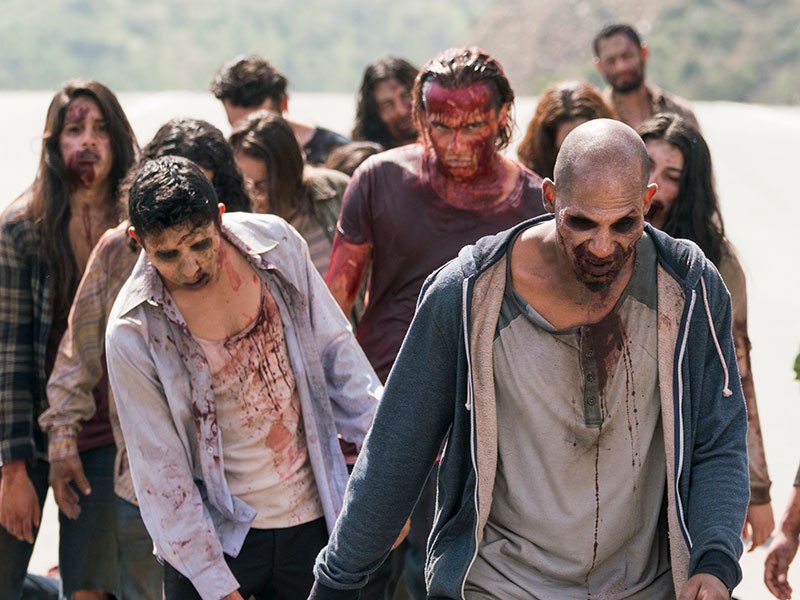 – Nick should have gotten a haircut at the salon.

– Nick likes dressing like a walker even when not in camo mode.

– Doctors in TWD universe need 24/7 body guards. They are the most valuable people on the planet, yet they’re left to wander around like common survivors.

Christopher Nolan is leading the charge against Warner Bros putting movies out on HBOMax, and Netflix won't be changing The Crown.
Read more
TV News