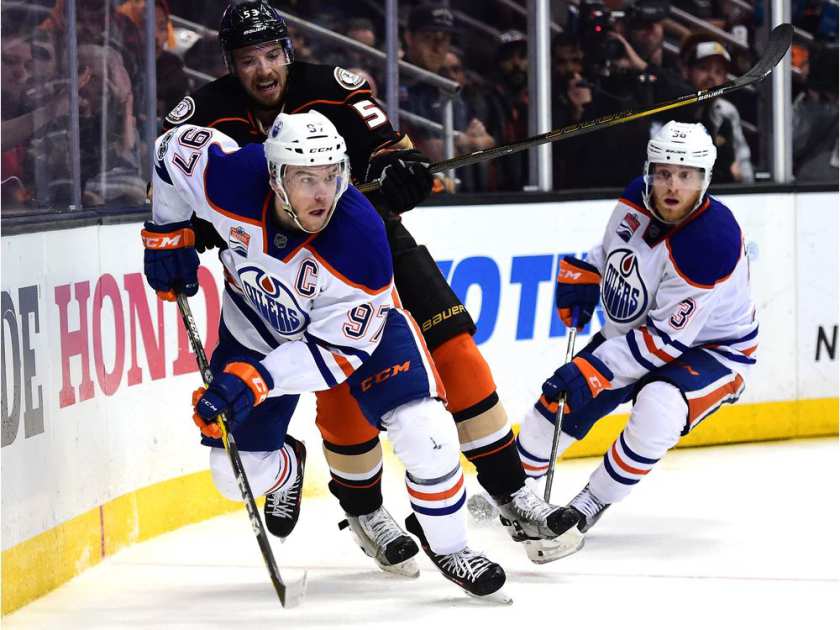 The Edmonton Oilers and the Anaheim Ducks will play in game seven of the 2017 NHL playoffs on Wednesday night. The game, in my view, has the potential to be one of the more controversial in recent NHL memory. You’d probably only agree with that if you’ve actually got enough lights on to see how strange the series has been thus far, something that many commentators have seen and tons of fans have recognized as well.

Suspicion of the NHL and the referees may currently be at an all-time high. Personally, I find it very strange that, as a resident of Vancouver Island, that the locals in this Canucks-market are commonly talking about the NHL as fixed with regard to the Oilers’ series. Canuck fans aren’t exactly sympathetic to the Oilers’ problems in general, but I’m overhearing lots of people lament about the Oilers/Ducks series and the plight of NHL credibility.

With regard to possible match-fixing attempts as far as I can see the fans that think that the NHL tries to fix their games/playoff series are in one or two categories:

(1) There is a contingent of fans that believe that the NHL wants their playoff series to be lengthy so as to provide more games to cash in on with game-related revenue. People that have this opinion believe that a four-game series does far less for ticket sales, concessions, and television time than a seven-game series does. Some fans believe that this provides a motive for the league to try and lengthen as many series as possible.

(2) There is a contingent of fans that think that some kind of pre-series calculation is performed for revenue projection. From this point of view, the team that looks more favorable in those projections in regard to latter-round play gets the nod for officiating favoritism, so their chances of being eliminated are reduced.

If these are true then why doesn’t every series go seven games with the league’s preferred outcome winning all the time? I would argue that it just comes down to credibility. Perception of crookedness doesn’t help the NHL and, if there’s fixing, then certainly the league would understand that it can’t become too obvious.

When it comes to the Anaheim/Edmonton series, there are certainly some that don’t see fixing going on – the referees are just humans that make errors. There’s an article from a few days ago at thehockeywriters.com titled “Blown Calls Ruining Oilers Playoff Chances, NHL Credibility” (Jim Parsons/May 6th). The article states that the referees “missed calls” in both games four and five in the Oilers’/Ducks’ series with “confirmation bias” a problem.

From this perspective had the calls not been, let’s say, accidentally “missed” due to psychological reasons then Edmonton would have wrapped the series up in five games. However, perhaps the officiating is more related to the first point above. Furthermore, if you think that the Los Angeles-area Ducks will sell ads on American television better than the Canadian-tundra Oilers would in the next round, then point two from above applies.

Judging by my social media interactions, I can say there certainly are a lot of people that don’t see anything wrong with the present series: they’re pretty much called Anaheim Ducks’ fans. It’s funny how so many Californians figure the 2016 federal election was fixed yet they find the notion of a crooked sports series to be incredulous. In fact, I’d like to know what goes on in the mind of a #Calexit-hashtaggin’ Californian that thinks Donald Trump cheated his way to power but finds the notion of fixed sports ridiculous. Seems to me that someone, who thinks that something as grandiose as a federal election could be fixed, could also think that a simple sports series could be fixed too without labeling the proponents as former alien abductees.

Whether the fix is in or the referees have just screwed up time and time and time and time and time again in Anaheim’s favor, the Oilers have had to outplay the Anaheim Ducks considerably just to get to a game seven that will be played on the road. Edmonton, through six games, leads the series 5-1 heading into a decisive game seven: in my opinion, that’s the absurdity of the situation. Edmonton need to win six games to win a best-of-seven series kind of like how Hillary Clinton might have needed to over-win the 2016 election just to have a chance at power.

Now I don’t believe for a second that what’s fair will always win out. However, I still think someone should point certain things out when a team is getting screwed.

On that note, it’s a testament to the hockey aptitude and mental fortitude of every one of the men on the Oilers’ bench that they have come this far. They have had to beat the snot out of Anaheim, absorb their phony celebrations, and take their slashes without retaliating for fear of penalty just to get to a one-and-done scenario with Anaheim hosting.

The location of the game in Anaheim is such that the situation won’t get out of control if the refs resume nudging the Ducks toward the conference finals. That’s a bad point to acknowledge for the Edmonton side.

However, they are still playing hockey, and the Oilers do have Connor McDavid and a supporting cast so deep that Anaheim can’t just focus on stopping one player. Throw in at least an average goaltender and a good coach, and you have the recipe for success in hockey. Meanwhile, the Ducks have done little of late to indicate that they are worthy of the conference finals, so long as you don’t believe the bullshit that surrounds their fraudulent celebrations. It’s a shame that a preview of a game focuses more on the officials while the players are relegated to a small paragraph near the end, but that’s Gary Bettman’s NHL for you.

Anyone that doesn’t think there’s some kind of colossal backlash coming in some way, shape, or form against the NHL is totally out to lunch. The 2017 Edmonton Oilers are so damn good that attempts to award victories to their second-round opponent in the playoffs has triggered the radar of fans in markets where the Oilers aren’t even well liked.