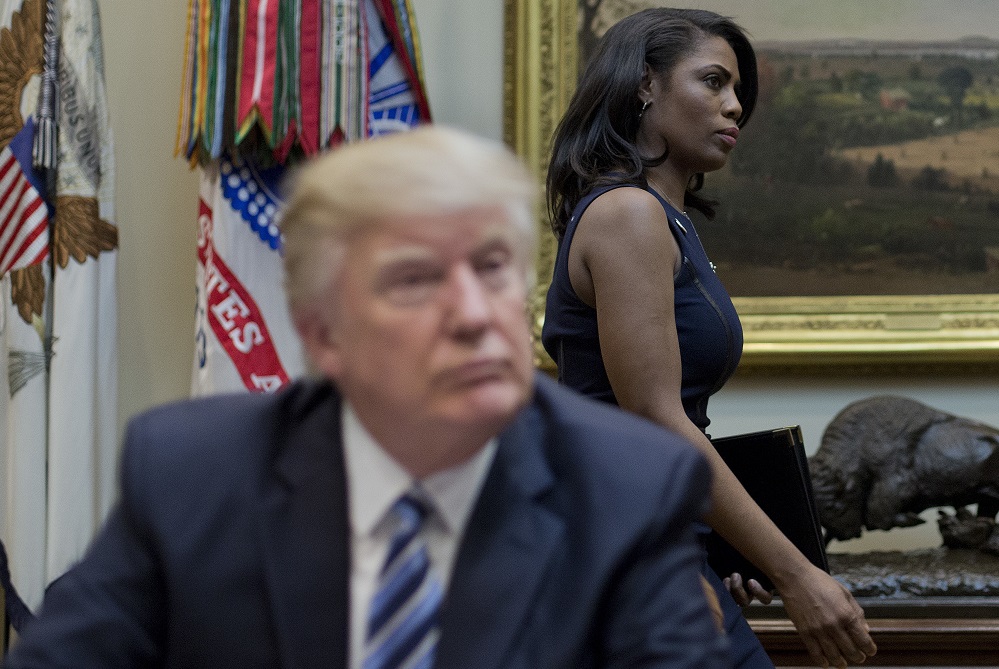 Put two expert reality star titans into a clash with the White House, and two things are guaranteed. One will a book will have a bestseller and the media will be all over it as former White House advisor Omarosa Manigault Newman’s book Unhinged: An Insider’s Account of the Trump White House has hit and looks to get Donald Trump rather unhinged.

Rather than just remain quiet on the subject, Trump is showing his newest Twitter obsession is with Omarosa as he shot off 7 tweets attacking his former aide. Naturally, he used words like “dog,” “deranged, and “lowlife” which only pushes her book up the bestseller charts like Michael Wolff’s Fire and Fury. His reaction shows that there is something there with her book, and it’s scaring him as more people turn on him as run to Robert Mueller.

Trump has kicked his character assassination effort into high gear on Omarosa over the last 24 hours because he knows what she’s capable of — and how dangerous she can be. He knows this because he knows what he is capable of and how dangerous he can be. Omarosa — and her allegations — pose a threat to Trump even while a decent chunk of them have already been rebutted. And he knows it.

Omarosa is, in some ways, the greatest creation of the Trump reality TV era. She is just like him, which is why he understands her and knows the damage she is capable of inflicting. It’s an absolutely fascinating bit of psychodrama that would make for a terrific twist in a reality TV series.

Unfortunately for all of us, this isn’t “The Apprentice.” It’s real life. 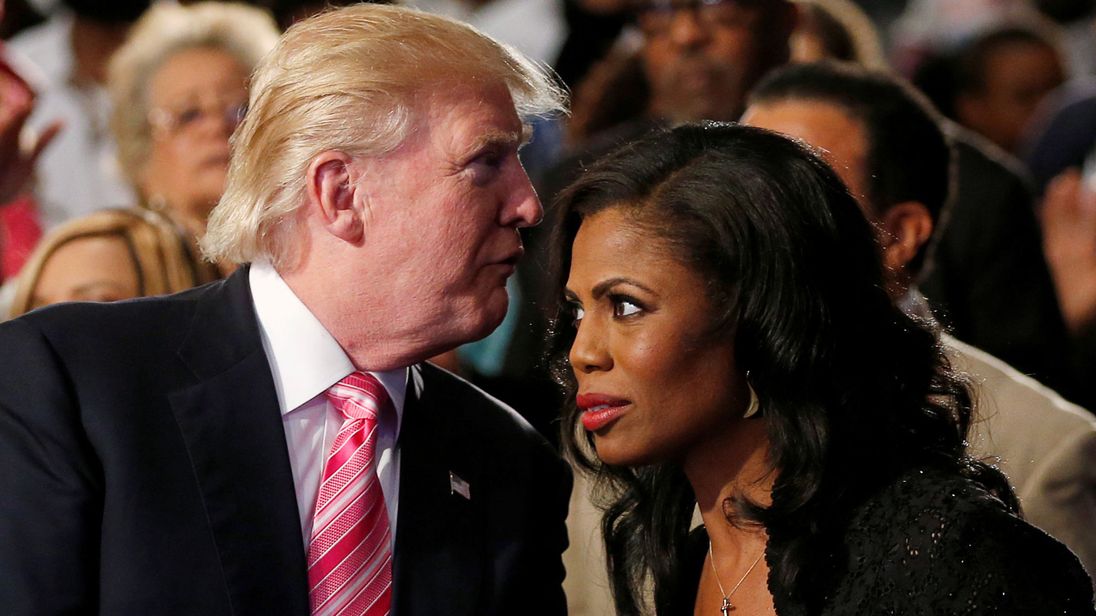 President Donald Trump and former aide Omarosa Manigault Newman faced off Monday in a messy clash that involved an explosive tell-all book, secret recordings, an ethnic slur and plenty of insults — reviving their roles as reality show boss and villain.

Late Monday, Trump tackled Manigault Newman’s claim that she had heard an audiotape of him using the N-word.

He tweeted that he had received a call from the producer of “The Apprentice” assuring him “there are NO TAPES of the Apprentice where I used such a terrible and disgusting word as attributed by Wacky and Deranged Omarosa.”

Trump insisted, “I don’t have that word in my vocabulary, and never have.” He said Manigault Newman had called him “a true Champion of Civil Rights” until she was fired.

Making matters somewhat worse was when White House press secretary Sarah Huckabee stated on Tuesday that she couldn’t guarantee that the people would never hear President Trump saying the n-word on audio.

Manigault Newman, the former White House liaison to black voters, writes in her new memoir that she’d heard such tapes existed. She said Sunday that she had listened to one after the book closed.

Earlier, Trump accused Manigault Newman as “wacky” and “not smart” after his former co-star revealed her recording of a phone conversation with the president.

Beyond their war of words, the row touched on several sensitive issues in Trump’s White House, including a lack of racial diversity among senior officials, security in the executive mansion, a culture that some there feel borders on paranoia and the extraordinary measures used to keep ex-employees quiet.

In an unusual admission, Trump acknowledged that the public sparring was perhaps beneath a person in his position, tweeting that he knew it was “not presidential” to take on “a lowlife like Omarosa.” But he added: “This is a modern day form of communication, and I know the Fake News Media will be working overtime to make even Wacky Omarosa look legitimate as possible. Sorry!”

The dispute has been building for days as Manigault Newman promotes her memoir “Unhinged,” which comes out officially Tuesday. The book paints a damning picture of Trump, including her claim that he used racial slurs on the set of his reality show “The Apprentice.”

In a series of interviews on NBC, Manigault Newman also revealed two audio recordings from her time at the White House, including portions of a recording of her firing by chief of staff John Kelly, which she says occurred in the high-security Situation Room, and a phone call with Trump after she was fired.

Manigault Newman says she has more recordings. Asked on MSNBC’s “Hardball” if special counsel Robert Mueller — investigating possible coordination between the Trump campaign and Russia — would be interested in any of them, she said, “If his office calls again, anything they want, I’ll share.”

Trump officials and a number of outside critics denounced the recordings as a serious breach of ethics and security — and White House aides worried about what else Manigault Newman may have captured in the West Wing.

The latest tape recording appears to show Trump expressing surprise about her firing, saying “nobody even told me about it.” But Manigault Newman said he “probably instructed General Kelly to do it.”

On Twitter, Trump declared Monday that she had been “fired for the last time,” a reference to her appearances on his reality TV show. He said Kelly had called her a “loser & nothing but problems,” but he himself had tried to save her job — because he liked her public comments about him.

“I told him to try working it out, if possible, because she only said GREAT things about me – until she got fired!” Trump tweeted.

Responding on NBC, Manigault Newman said, “I think it’s sad that with all the things that’s going on in the country that he would take time out to insult me and to insult my intelligence.”

She added, “This is his pattern with African-Americans.”

First lady Melania Trump, meanwhile, is disappointed that Manigault Newman “is lashing out and retaliating in such a self-serving way, especially after all the opportunities given to her by the President,” said White House spokeswoman Stephanie Grisham.

Manigault Newman’s exit does highlight the lack of diversity among Trump’s top aides. She was the highest-ranking African-American on the White House staff. She said on NBC that in her absence “they’re making decisions about us without us.”

Trump’s battle with his former top black aide underscores the racial tensions that have defined his presidency. He notably blamed “both sides” for violent clashes between white supremacists and counterprotesters in Charlottesville, Virginia, a year ago and has questioned the intelligence of other prominent black figures including California Rep. Maxine Waters, basketball star LeBron James and TV journalist Don Lemon. He also has targeted black NFL players for kneeling in social protest during the national anthem.

Manigault Newman also alleges that Trump allies tried to buy her silence after she left the White House, offering her $15,000 a month to accept a “senior position” on his 2020 re-election campaign along with a stringent nondisclosure agreement.

The offer a slew of new questions about the ways that White House aides are being offered safe landing spots after they leave. For example, Trump’s former personal aide John McEntee, who was removed from his job in April, went to the campaign.

It was not clear exactly what he was referring to. White House Counselor Kellyanne Conway said Sunday on ABC that there are “confidentiality agreements” in the West Wing. And Trump’s campaign said that in the 2016 race she “signed the exact same NDA that everyone else on the campaign signed, which is still enforceable.”

Meanwhile, Trump’s attorney, Rudy Giuliani, said on “Fox and Friends” Monday that Manigault Newman may have broken the law by recording private conversations inside the White House.

“She’s certainly violating national security regulations, which I think have the force of law,” Giuliani said.

But experts in national security and clearance law said that, while she seriously violated rules — and would likely be barred from ever being granted a security clearance — she probably didn’t break any law unless the conversations she recorded were classified.

“None of us have been able to identify that it would be illegal if unclassified,” said Mark Zaid, a Washington attorney, who has focused on national security law.

In the recording with Kelly, which Manigault Newman quotes extensively in her new book, Kelly can be heard saying that he wants to talk with her about leaving the White House.

“It’s come to my attention over the last few months that there’s been some pretty, in my opinion, significant integrity issues related to you,” Kelly is heard saying, before adding that if she makes it a “friendly departure” then she can “go on without any type of difficulty in the future relative to your reputation.”

Manigault Newman said she viewed the conversation as a “threat” and defended her decision to covertly record it and other White House conversations, saying otherwise “no one” would believe her.

She may not be finished talking.

Manigault Newman said, “There’s a lot of very corrupt things happening in the White House, and I am going to blow the whistle on a lot of them.”