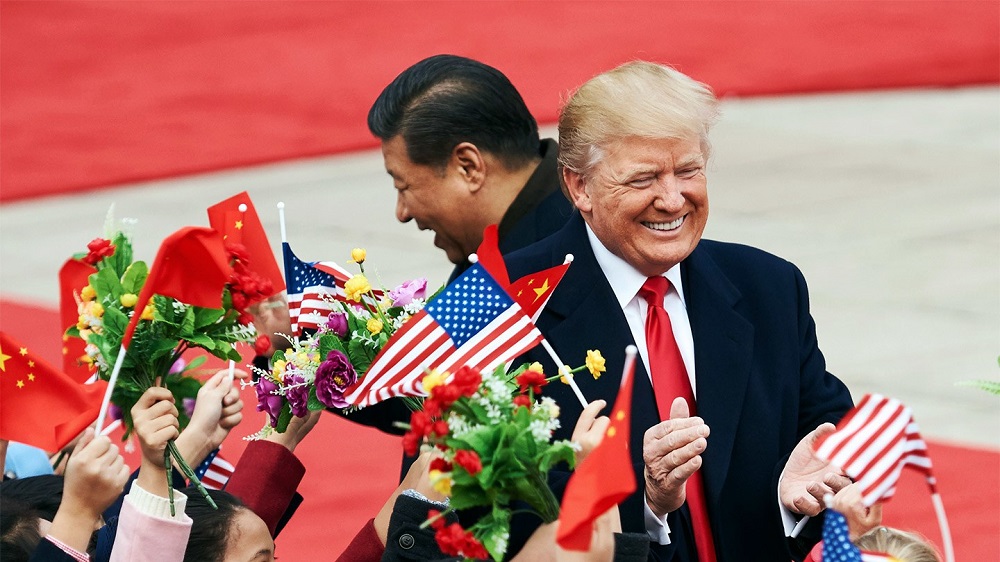 It doesn’t seem to matter whether Donald Trump is in America or another country, he tends to overstate the facts or just make up his own.

Veterans Day prompted President Donald Trump and his administration to take stock of what’s been done to fix health care for those in uniform. They claimed more progress than has been made.

That tendency to overreach extended to trade and the economy as Trump visited Japan, South Korea, Japan and then Vietnam, where he told U.S. veterans of the Vietnam War that the Department of Veterans Affairs has made “amazing” strides and already “is a whole new place.”

His remarks and a White House account of progress at the VA did not acknowledge old problems that persist. For example, a key effort to improve waiting times by revamping the VA’s electronic medical record system may not be completed for eight more years — when Trump will be out of office.

A look at some statements about the VA and other topics arising from his travels and over the past week:

WHITE HOUSE statement Thursday: “President Trump announced that the Department of Veterans Affairs will adopt the same Electronic Health Record as the Department of Defense. VA’s adoption … will ultimately result in all patient data residing in one common system, enabling the immediate availability of service members’ medical records and seamless care between the departments.”

THE FACTS: While the administration did announce in June that it would overhaul the VA’s aging information technology system, VA Secretary David Shulkin admitted to Congress last month that the project to revamp electronic medical records won’t be completed for seven to eight years. The full costs of the project also are not known and have yet to be budgeted.

An upgraded IT system is central to the VA’s effort to reduce wait times for medical care as well as to fulfill Trump’s promise of increasing private care options for veterans. Under Shulkin’s plan to expand the Choice private-sector program, the VA would outsource more routine veterans’ care to private providers including MinuteClinics while treating more complex injuries. The success of that plan requires a seamless sharing of medical records not only with the Pentagon but also with private physicians, a capability the VA does not currently have.

Shulkin also has yet to negotiate pricing for the no-bid contract with the company that designed the Pentagon’s IT system, estimated to cost at least $16 billion. The big price tag has spurred bills in Congress to require regular updates from the VA on timeliness and cost projections, as well as risks such as breaches to patient privacy.

WHITE HOUSE: “President Trump signed the Veterans Appeals Improvement and Modernization Act of 2017, taking action to streamline the appeals process for disability compensation claims within the VA. More than 470,000 veterans are awaiting pending decisions regarding their appeals.”

THE FACTS: Trump signed the bill in August, part of a bid to reduce a rapidly growing claims backlog, but its immediate impact is overstated, as it will not affect the 470,000 pending claims.

Under the legislation, veterans will be able to file “express” appeals if they waive their right to a hearing or the ability to submit new evidence.

While lawmakers hope the legislation ultimately could reduce average wait times to less than a year, it applies almost entirely to newly filed appeals.

Shulkin has said the VA would need Congress to approve an additional $800 million for “hiring surges” of additional appeals processors if the VA hoped to clear its current backlog within 10 years.

THE FACTS: When Trump calls for reciprocity in Japan-U.S. trade, he might want to be careful what he wishes for.

With autos, for example, Japan places no tariff on fully assembled vehicles that are imported. But the U.S. has a 2.5 percent tariff on most imported vehicles — 25 percent on pickup trucks. That imbalance — or lack of reciprocity — favors the U.S.

It’s true U.S. vehicle sales in Japan pale in comparison with Japanese sales in the U.S. Detroit has long complained about regulations that stop U.S. carmakers from opening dealerships or selling cars in Japan. But there are other reasons for the disparity in the auto trade, as well. For example, Japan uses right-hand-drive vehicles; the U.S. mainly makes left-hand-drive vehicles in its domestic industry.

And Trump’s point about Japanese vehicles pouring into the U.S. is somewhat off the mark. Made-in-Japan vehicles are a distinct minority of the vehicles sold in the U.S. by Japanese automakers.

WILBUR ROSS, U.S. commerce secretary: “Today’s signings are a good example of how we can productively build up our bilateral trade.” — remarks Thursday in Beijing.

THE FACTS: Papers signed in China during Trump’s visit were largely a packaging of previously worked-out deals, tentative investments, statements of intent and extensions of business with existing Chinese customers, with some new orders. They do not point to a turnaround in deep-seated trade tensions between China and the U.S.

Such signing ceremonies in China are often just that, ceremonial. They typically represent purchases that Chinese customers already planned to make and held off on announcing. General Motors’ $2.2 billion piece of the package, for example, consists mostly of selling parts to its existing joint venture with the Chinese government.

Alaska, however, welcomed an agreement that could spur construction of a long-sought pipeline to ship natural gas from the North Slope to a port for export to Asia. Oil companies backed away from the project, but the agreement with Chinese interests means all parties will work toward a decision by the end of next year on whether to proceed.

THE FACTS: This statement glosses over one of several budget shortfalls by the VA. Congress was forced in August to approve $2.1 billion in emergency money to keep Choice running after the VA had repeatedly understated costs of the program, assuring lawmakers for much of the year that money would last until January. Shulkin subsequently revealed an emergency shortfall in June that threatened medical care for tens of thousands of veterans.

The $2.1 billion was intended to last until February. But weeks after receiving the money, the VA acknowledged that money for Choice would again run out sooner than expected, requiring Congress to approve additional stopgap financing before the end of the year or face disruptions to veterans’ health care.

Lawmakers have yet to act, in part as the Trump administration sorts out longer-term costs to the private-sector program.

WHITE HOUSE: “The VA has launched its ‘Access and Quality Tool,’ allowing veterans to see online the wait times at VA locations.”

THE FACTS: An effort started by Shulkin when he was VA undersecretary of health in President Barack Obama’s administration, the VA website www.accesstocare.va.gov provides data on wait times as well as on veterans’ satisfaction ratings in getting timely appointments, something that no other health care system in the country does.

Still, major veterans groups such as Veterans of Foreign Wars have faulted the data for being misleading and not depicting wait times the way a typical person would view it.

The Government Accountability Office, for instance, has noted that the data for returning patients do not include the amount of wait time from when a veteran initially asks for care and when a scheduler reaches out to set an appointment, which it said could be lengthy. In addition, GAO earlier this year continued to find evidence that VA data can be unreliable because of schedulers recording wrong dates or changing dates outright, though the VA says it is implementing new checks and training to help identify “outliers” in scheduling.

VFW told Congress last month that its survey found only 67 percent of veterans said they had obtained a VA appointment within 30 days, less than the 93 percent that VA reports.

WHITE HOUSE: “The White House has opened a brand new VA Hotline staffed principally by veterans and direct family members of veterans to ensure that no complaint goes unaddressed.”

THE FACTS: It opened, but it did not get off to a smooth start. Trump pledged during the presidential campaign to create a “private White House hotline” answered by a real person 24 hours a day to take complaints from veterans, leading the VA to create a hotline beginning in June. Originally scheduled to be fully operational by Aug. 15, it has encountered some delays. In a letter to the VA last month, Sen. Jon Tester, the top Democrat on the Veterans Affairs Committee, complained, “The White House is frequently routing these calls back to local VA offices, which are often understaffed and do not have the ability to address the additional casework promptly.”

Tester noted the VA already had several existing options for receiving complaints from veterans and urged better coordination to make sure no one falls through the cracks.

TRUMP: “Numbers are phenomenal over the last — since November 8th, Election Day. Our unemployment is at a 17-year low. We’ve gotten almost 2 million more people in the workforce in just that short period of time. I’ve reduced regulations terrifically, frankly, if I do say so myself.” — remarks to business leaders in Tokyo, Monday. Tweet from previous weekend: “Unemployment is down to 4.1%, lowest in 17 years. 1.5 million new jobs created since I took office. Highest stock Market ever, up $5.4 trill.”

THE FACTS: His numbers are close to the mark. Trump can rightfully brag about the U.S. economy, but it’s not quite as exceptional as he says, and he can’t yet legitimately claim that his record on job creation is vastly superior to Obama’s. Many of the economic figures he cites are advancing a recovery from the Great Recession that dates back to the middle of 2009.

The unemployment rate did slip to 4.1 percent in October. But that was in part because many Americans gave up searching for work — one of the criticisms Trump made of Obama’s record during the 2016 campaign.

Trump also takes credit for helping create on average 168,500 jobs a month, but Obama in 2016 averaged about 187,000 jobs a month. Of course, hiring should slow as the unemployment rate declines because fewer people are searching for work.

As for the stock market, the Dow Jones Industrial Average returned to its previous peak in March 2013 and has been setting records ever since. The promise of corporate tax cuts by Trump has helped the stock market, but many of the gains rest on the foundations of an economic recovery that saw corporate profits climb.