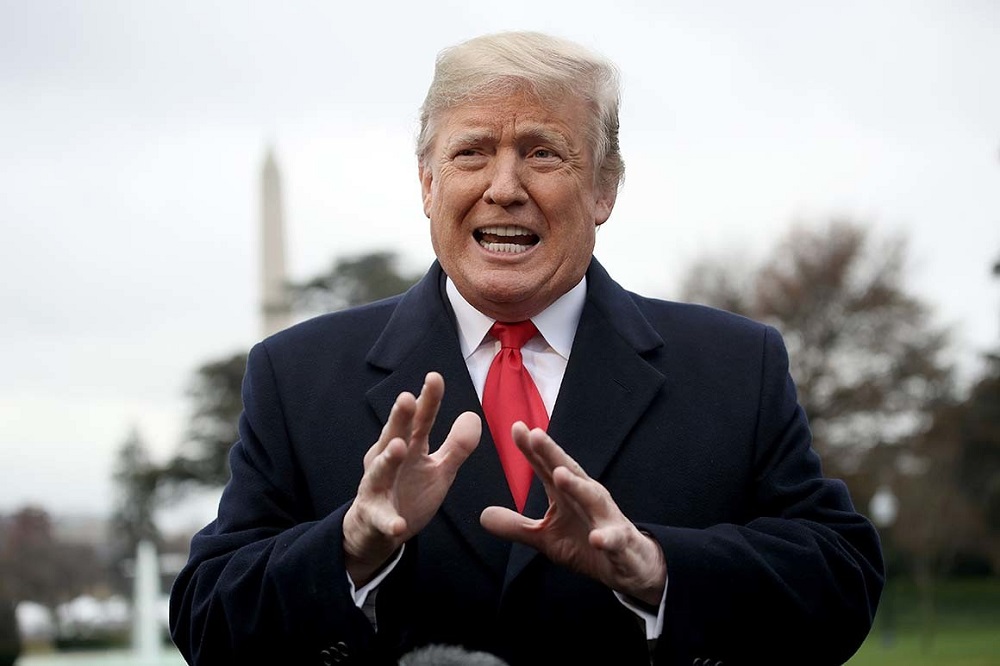 When asked about the Fourth National Climate Assessment report that was quietly put out on Black Friday, Donald Trump admitted to looking at it, but he said he doesn’t believe any of it.

Trump has rejected a central conclusion of a dire report on the economic costs of climate change released by his own administration, but economists said the warning of hundreds of billions of dollars a year in global warming costs is pretty much on the money.

Just look at last year with Hurricanes Harvey, Maria and Irma, they said. Those three 2017 storms caused at least $265 billion in damage, according to the National Oceanic and Atmospheric Administration.

The National Climate Assessment report, quietly unveiled Friday, warned that natural disasters are worsening in the United States because of global warming.

“The potential for losses in some sectors could reach hundreds of billions of dollars per year by the end of this century,” the report said. It added that if emissions of heat-trapping gases continue at current levels, labor costs in outdoor industries during heat waves could cost $155 billion in lost wages per year by 2090.

The president said he read some of the report “and it’s fine” but not the part about the devastating economic impact.

“I don’t believe it,” Trump said, adding that if “every other place on Earth is dirty, that’s not so good.”

Nearly every country in the world in 2015 pledged to reduce or slow the growth of carbon dioxide emissions, the chief greenhouse gas.

“We’re already there,” said Wesleyan University economist Gary Yohe, who was a reviewer of the national report, which was produced by 13 federal agencies and outside scientists. “Climate change is making a noticeable impact on our economy right now: Harvey, Florence, Michael, Maria.”

Yohe said, “It is devastating at particular locations, but for the entire country? No.”

Economist Ray Kopp, a vice president at the think tank Resources For the Future and who wasn’t part of the assessment, said the economics and the science in the report were absolutely credible.

“I believe this is going to be a devastating loss without any other action-taking place,” Kopp said Monday. “This is certainly something you would want to avoid.”

Earlier, the White House had played down the report. Spokeswoman Lindsay Walters said in an emailed statement that the report “is largely based on the most extreme scenario, which contradicts long-established trends by assuming that, despite strong economic growth that would increase greenhouse gas emissions, there would be limited technology and innovation, and a rapidly expanding population. ”

Throughout the 29-chapter report, scientists provide three scenarios that the United Nations’ climate assessments use. One is the business-as-usual scenario, which scientists say is closest to the current situation. That is the worst case of the three scenarios. Another would envision modest reductions in heat-trapping gases, and the third would involve severe cuts in carbon dioxide pollution.

For example, the $155 billion a year in extra labor costs at the end of the century is under the business-as-usual scenario. Modest reductions in carbon pollution would cut that to $75 billion a year, the report said.

The report talks of hundreds of billions of dollars in economic losses in several spots. In one graphic, it shows the worst-case business-as-usual scenario of economic costs reaching 10 percent of gross domestic product when Earth is about a dozen degrees warmer than now with no specific date.

Yohe said it was unfortunate that some media jumped on that 10 percent number because that was a rare case of hyperbole in the report.

“The 10 percent is not implausible as a possible future for 2100,” Yohe said. “It’s just not terribly likely.”

Kopp, on the other hand, said the 10 percent figure seems believable.

“This is probably a best estimate,” Kopp said. “It could be larger. It could be smaller.”