Home All News Movie News ‘The Dinner’ (2013) review: Korean cinema at its best

Korean independent film director Kim Dong Hyun returned in 2013 after a six-year absence with “The Dinner,” a low-budget drama that managed the impressive feat of being shot for less than $100,000. (You can tell that every dollar was put up on the screen too.) Whereas Kim’s 2005 debut “A Shark” and “Hello, Stranger” from 2007 tended to revolve around outsider figures, here he goes for the opposite approach, focusing on the many hardships faced by an everyday modern family.

Despite it being a low-key production, for its premiere, the film was given the prestigious closing slot of the 2013 Busan International Film Festival.

The film opens with a woman called Kyung Jin (Lee Eun Joo) arguing with the father of her newborn child, who has since left her and who threatens to have the baby put up for adoption if left in his care. A few years later, the boy, Jae Hyeon is now being looked after by Kyung Jin with the help of her elderly parents (Kim Su Bok and Baek Nak Sun), aided by her older and younger brothers In Cheol (TV actor Jung Eui Gap) and In Ho (Jeon Kwang Jin). The family doesn’t have things easy, and struggle to get by financially, especially after In Cheol loses his job, which also causes trouble for him when it comes to looking after his sickly wife Hye Jeong (Park Se Jin, “Choked”). In Ho has problems of his own, trying to pay off his student debts by working as a driver while supporting his fiancée Min Jeong (Han Song I).

With “The Dinner,” Kim Dong Hyun seems to have been heavily influenced by Japanese master Hirokazu Kore-eda, aiming for the same kind of down to earth family portrait, albeit with a somewhat darker and more depressing tone. It certainly doesn’t make for cheerful viewing, being filled with economic suffering, illness, arguments, child custody battles and tragedy, charting the downfall of an average group of essentially decent and likeable people due to forces beyond their control and despite their best efforts to keep themselves afloat. It’s a humanistic offering, Kim making a real effort to explore and engage his sympathetic characters, and the film relies for the most part on quietly borne pain rather than histrionics, with the solutions to problems being sought through dramatic rather than violent conflict.

The accomplished script keeps things grounded, and though there are a few clichés thrown in here and there (In Cheol’s doomed dream of opening a restaurant and his wife’s unspecified illness, for example), Kim achieves a high degree of believability, making the film involving and affecting. The understated performances also help, all the cast being convincing in their generally well-written parts, Jung Eui Gap, in particular, impressing in what gradually emerges as the closest thing the film has to a central role.

At the same time, it’s understandable that “The Dinner” might not be for everyone, as it’s very much an indie film, and frequently crosses the line between being subtle and obtuse, especially when it comes to the ending. Similarly, it’s a fairly slow moving piece of cinema, clocking in at a rather long 125 minutes and mostly made up of scenes of dialogue and misery. Things do pick up around the end of the second act when disaster strikes, and this adds tension to the final third, though even then Kim resolutely avoids anything too melodramatic, giving the film a very different feel to most films of its type. There’s a definite sense of stillness to the proceedings as a whole, and it’s a patient affair, with pale, grey colors that reflect the quiet desperation of its characters.

For those who enjoy Korean indie cinema though, “The Dinner” is one of the better films of 2013, even if it’s not exactly easy or fun viewing. Deliberately paced and unflinching in its exploration of the disintegration of an unfortunate family, it sees Kim Dong Hyun continuing his run as a director worth watching and as a skilled commentator on the human condition. 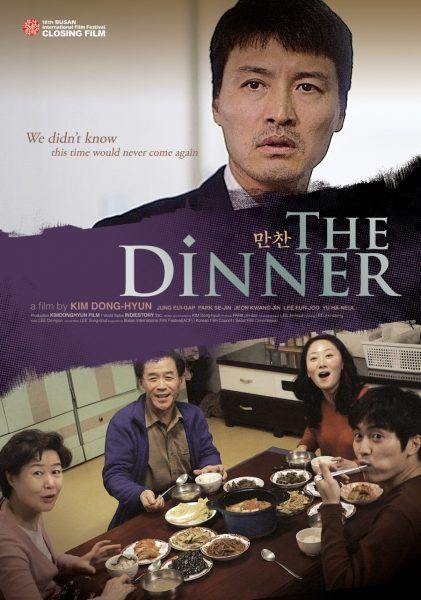