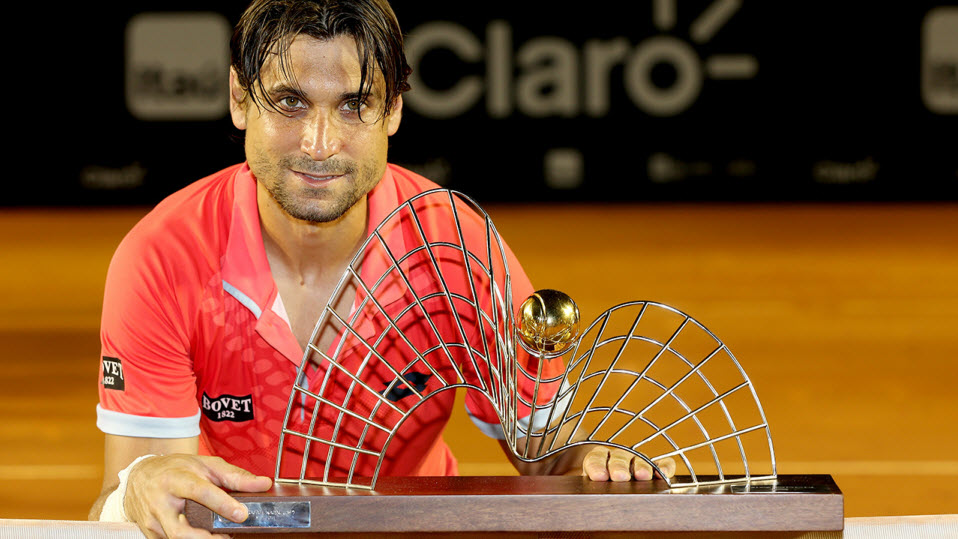 David Ferrer, already a winner of 22 titles on tour heading into this past week, has added another impressive title to his collection. The Spaniard, having enjoyed ample previous success in Latin America, claimed the ATP Rio 2015 event in Brazil. Ferrer won the tournament final quite easily over Italy’s Fabio Fognini 6-2, 6-3.

The Rio Open, part of the 500-series on tour, featured a reasonably strong cast of players this past week. Besides Ferrer and Fognini, Rafael Nadal, considered the greatest clay courter ever, was the pre-tournament headliner and favorite. However the draw also featured Tommy Robredo, Nicolas Almagro, and Pablo Cuevas – players who have enjoyed ATP success in the past.

Speaking about the final against Fognini, Ferrer, who also won ATP Doha 2015, stated the following:

“I’m really happy,” said Ferrer. “It’s my 23rd tournament win and I never won here before in Rio. I’m very happy for that. I had the chance to be in the Carnaval this week and all the facilities are good. This week is very special. I have a lot of confidence with my game. I won two tournaments this year. It’s very important for me being with the best players in the world.”

With the victory the Spaniard, who has played well against Fognini historically, improved his record to 8-0 against the Italian. Furthermore, in claiming his second title of 2015, Ferrer has already eclipsed his title count from 2014, a season where he only claimed one title.

The Spaniard is sometimes overshadowed by countryman Rafael Nadal. But Ferrer, in claiming his 23rd title, appears to be playing better than Rafa at this point. It will be interesting to see which of the two players will be higher ranked after the clay court season, especially since Ferrer defeated the player that knocked Nadal out of the Rio draw.

But for his efforts the lesser-touted Spaniard looks as though he will remain the World No. 9 while Fognini will jump up a bit to the World No. 22 position.

Looking ahead at next week’s draws, one finds Fognini with a bye into the second round of the ATP Buenos Aires event. The Italian, having defeated Nadal in Rio, could be on a collision course with the World No. 3 again, however both players have a couple matches to win before that semifinal can take place.

“When you lose in a final, you’re always disappointed,” said Fognini. “It’s a big week for me. Yesterday I beat Rafa. It’s a big tournament and I’m happy because I put in a lot of work mentally and physically. To be 100 per cent against David it is difficult.”

Ferrer is not in the Buenos Aires draw however he is in the ATP Acapulco draw as the two-seed. He could face fatigue issues having competed so hard this past week however he also has some pretty thin competition through the first two, maybe even three, rounds of the Acapulco tournament.

Though he has the 2016 Olympics in his sights, Ferrer knows his time on tour is winding down. “I am not thinking about the end but I know the end is closer than the beginning. I am only focused in the moment, to be enjoying my moment.”

“The last year I think I did a good year,” Ferrer continued. “I finished the year No. 10. But there are younger players like Kei Nishikori, Marin Cilic won a Grand Slam, Stan Wawrinka, Grigor Dimitrov. In the end, it’s more difficult to be there with the best players of the world. Last year I finished No. 10. I did my best, I tried to be there. Finally, I was able to play a match at the World Tour Finals in London. Now it’s another year and the past is finished. It’s not important. I only focus on the moment.”