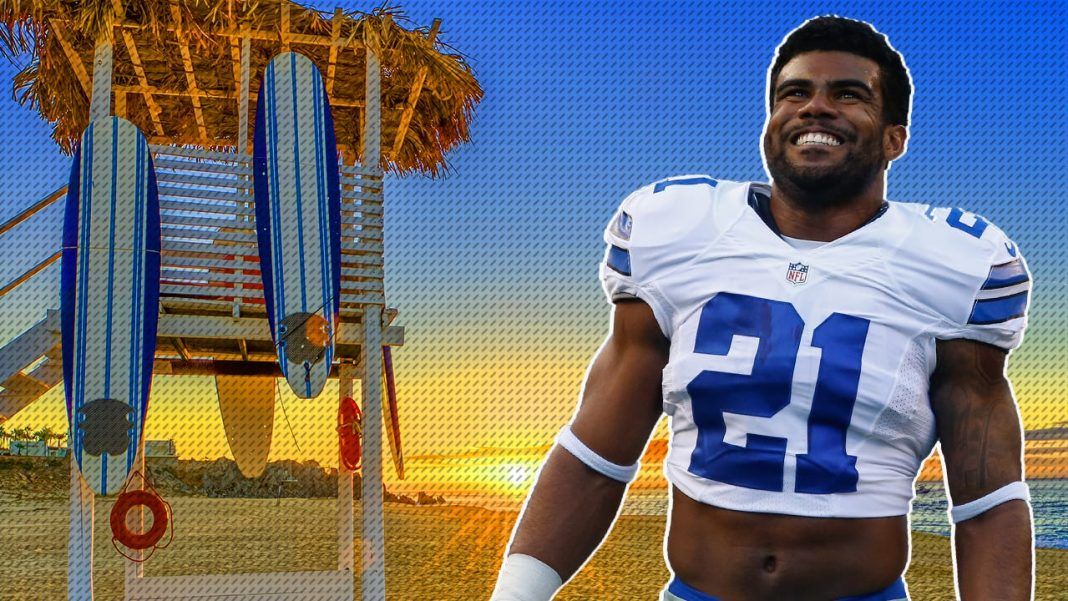 Ezekiel Elliott doesn’t have to be the fastest running back in the NFL, but his physicality is what has kept him leading the league when it comes to rushing for two of his first three seasons. Philadelphia Eagles safety Malcolm Jenkins admitted to Eagle’s Wire Glenn Erby that his NFC East rival is easily the top physical runner in football.

“I’d say Ezekiel Elliott is probably the No. 1 contact back in the league right now. He’s looking to punish guys. He’s not trying to juke you. He’ll jump over you every now and then if you keep trying to go low, but he’s fine with just punishing the defender at the end of it.”

Well, that’s the message Jones is putting out there trying to get a deal done with his missing two-time NFL rushing champion. He’s more than aware of the media coverage scrutiny, but he’s trying to act indifferent to it all.

“When have I ever not done one?” Jones said after practice at training camp Thursday night. “So I don’t worry about that. You just keep plugging.”

Elliott has missed five camp practices while seeking a new contract despite having two years remaining on his current one.

“We’ve got three really good football players that we’re dealing with here and that have very good representation,” Jones told Dallas radio station 96.7 KTCK The Ticket. “And they want to see the market. We can’t push the issue unless we want to be a market-setter. And we’re damn sure not going to be a market-setter.”

Jones also said that “you don’t need to have a rushing champion to win a Super Bowl,” but having an elite running back like Elliott on your team makes it much easier to land that coveted Lombardi Trophy.

But in the aftermath of receiver Michael Thomas agreeing to a record-breaking $100 million deal with the Saints Wednesday, Jones wants to be clear: The Cowboys aren’t looking to be the next team setting a financial record.

The fourth overall choice in the 2016 draft, Elliott is due to make $3.9 million this season and $9.1 million in the fifth year, which was a team option since the former Ohio State star was a first-round pick.

Two days after seven-year veteran and former Elliott backup Alfred Morris returned to the Cowboys, Jones suggested he was prepared for a long holdout with the 2016 All-Pro who led the league in rushing as a rookie that year.

“I don’t see a point months into the season,” Jones said. “While we’re not there right now, there are some lines there. And they do bite when you don’t play. I don’t have a time that I’m looking at that is a concern.”

The Cowboys can fine Elliott $40,000 per day, and Elliott risks losing a season that would count toward free agency if he doesn’t report at least 30 days before the Sept. 8 season opener at home against the New York Giants.

Elliott isn’t the only offensive star for the Cowboys with a big payday coming.

Quarterback Dak Prescott, a rookie sensation alongside Elliott when Dallas won the NFC East three years ago, is in the final year of his first deal. The 2016 NFL Offensive Rookie of the Year has a base salary of just $2 million after going 32-16 as the starter in his first three seasons.

Receiver Amari Cooper, who joined the Cowboys in a midseason trade last year and sparked a sluggish offense, is by far the highest-paid of the three at the moment. Cooper is at $13.9 million in the fifth year of the rookie deal he signed as the fourth overall pick a year before Elliott.

“As far as doing something that would disrupt and shake the base of our plans for how to keep the talent we’ve got here and how to do that, I’m not about to shake that loose over that concern,” Jones said. “We want to be fair. We want our players to feel good about their contract. But at the same time, we don’t want to do things that are out of line because we can’t afford to be that way.”

Elliott was seen in Frisco, Texas, where the Cowboys have their practice facility, on reporting day for players in California. He has since gone to Cabo San Lucas, Mexico, where he spent time two years ago during his six-game suspension over domestic violence allegations.

“I’m not even giving it a second thought as to his conditioning, which is part of his ability to step right in,” Jones said when asked about Cabo. “That’s not even an issue. I’m not concerned about him missing reps out here relative to getting his timing down.”

Elliott had another off-field issue this past offseason — a run-in with a security guard at a music festival in Las Vegas. The NFL cleared him in that incident about three weeks before camp.

“A lot of the negative stuff you hear about him in the news and all that, that’s not who he is,” said running backs coach Gary Brown, who said he has talked to Elliott since the team arrived in California. “He’s a really good guy, cares about his teammates and it’s killing him not to be here.”

Morris was the primary back during Elliott’s 2017 suspension, rushing for 430 yards and a touchdown in those six games. He had a career-high 1,613 yards rushing as a rookie with Washington in 2012.

“I’m definitely confident in myself that I can be a featured back,” said the 30-year-old Morris, who spent two seasons with the Cowboys after signing as a free agent a few weeks before they drafted Elliott. “I still have it. I feel better now than I did my rookie year.”

Darius Jackson, a sixth-round pick by the Cowboys the same year they drafted Elliott, is running with the first team in camp. Dallas drafted two more running backs this year in Tony Pollard (fourth round) and Mike Weber Jr. (seventh).

“You try to develop,” Jones said. “We have to do that in case Zeke might not be here period, without a contract issue. We all know that can happen.”