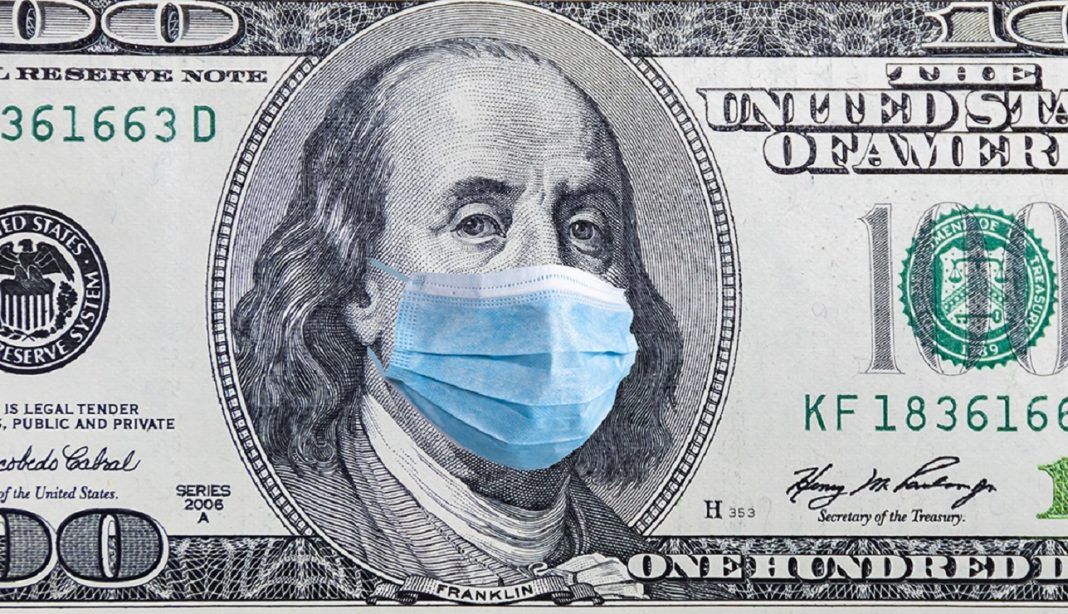 Whenever there is confusion and panic as with the Coronavirus pandemic, there will be those trying to profit from it. Sadly, the division in America has only be emphasized by COVID-19, so it has been easier for fraudsters to exploit all the confusion out there.

It’s no wonder why there’s even more anxiety and frustration than ever in the United States. Read our guide to help feeling overwhelmed during this pandemic.

To see the latest numbers of confirmed Coronavirus cases and deaths, you can check out the maps and information here.

CLAIM: Relief checks being sent to U.S. taxpayers by the government under the coronavirus economic recovery bill will have to be paid back.

THE FACTS: Videos and online reports claiming that millions of Americans will have to repay the relief checks they receive from the federal government under the $2.2 trillion coronavirus economic recovery bill are not true. The government began issuing the one-time payments this week. Most adults who earned up to $75,000 will see a $1,200 payout, while married couples who made up to $150,000 can expect to get $2,400. Parents will get payments of $500 per child. The checks will be directly deposited into bank accounts or mailed to households, depending on how you’ve filed your tax returns in the past. In recent days, social media posts have falsely claimed there’s one catch to this money — that you’ll eventually have to pay it back.

“Next year, you’re automatically going to owe $1,200 come tax season,” one of the videos, viewed hundreds of thousands of times on YouTube, falsely claims. The video was shared widely on social media platforms including Facebook, Instagram, Twitter and TikTok. The U.S. Treasury Department and Internal Revenue Service, which are working to deliver the money to people, confirmed to media outlets that households will not have to pay back the money in next year’s tax filing. “This is not an advance and there is absolutely no obligation to pay it back,” Treasury spokeswoman Patricia McLaughlin said in an email.

The federal government uses information from 2018 or 2019 tax returns — whichever was filed most recently — to determine eligibility for the payouts. The confusion on social media appears to have stemmed from language in the economic rescue bill that refers to the checks as an “advance refund” because the money is being given out in the 2020 tax year, before Americans have even filed their tax returns for the year. The 2020 tax form has not been printed but the relief checks will not have any bearing on your income deductions next year, said Eric Smith, a spokesman for the IRS.

CLAIM: You can call a 1-800 number and enter your social security number to check on the status of the relief check the federal government is sending as part of the economic recovery bill.

THE FACTS: Social media users are posting hoax 1-800 numbers, urging people to call and check the status of their checks. The Internal Revenue Service isn’t currently accepting phone calls because of the coronavirus. False posts containing 800 numbers vary slightly; one text post, for example, says all you need to do is call the number and check using “the last 4 of your SS.” Another says to enter the last four digits of a social security number along with a zip code. In reality, people who typically do not file a tax return, such as Social Security recipients, can visit a new tool on the IRS site to fill out a form that will allow the government to directly deposit the checks into your bank account.

And on Wednesday, the IRS announced it was launching a “Get My Payment” site, where people can check the status of their relief check by entering basic, personal information including their social security number. The IRS has warned Americans of scam artists who might try to swindle you out of your relief check through fraudulent emails, text messages, websites or social media posts that request your banking or personal information. Such scams might describe the checks as “stimulus check” or “stimulus payment”; the official term the government is using to describe the money is “economic impact payment.”

THE FACTS: Michigan’s Department of Licensing and Regulatory Affairs released a memo in March asking for physicians and pharmacists not to stockpile hydroxychloroquine or chloroquine. A false post circulating on Facebook claims that Gov. Whitmer banned the anti-malaria drug hydroxychloroquine after President Donald Trump began pushing for its use against the coronavirus. “She banned a drug because President Trump said it was helping treat the Wuhan virus. Now, she’s begging the federal government to send her as much of that same drug as they can spare,” a post being shared on Facebook post falsely claimed.

David Harns, communications interim director at the Michigan licensing department — known as LARA — told media outlets that the drug is not banned in Michigan. “LARA recognizes the ability of prescribers to make proper clinical decisions regarding these drugs, including the need to follow responsible prescribing practices to combat drug hoarding and to prevent unnecessary shortages.” President Donald Trump has been pushing for chloroquine and a newer similar drug called hydroxychloroquine to be used against the coronavirus after some small tests suggested the drugs might prevent the virus or help patients recover sooner. The drugs have long been known to have potentially serious side effects, like altering the heartbeat, which could lead to sudden death, according to reporting.

Hydroxychloroquine is officially approved for treating malaria, rheumatoid arthritis and lupus, but not COVID-19. On March 24, Michigan’s Department of Licensing and Regulatory Affairs released a memo saying hydroxychloroquine was being prescribed without a legitimate medical purpose. The memo stated that Michigan physicians should not be filling the prescription if there is no medical purpose. A few days later, the office released another memo clarifying their statement, warning against stockpiling the drug. “The purpose of the communication was to remind both prescribers and dispensers of their continued obligation to adhere to the standards of practice and exercise the professional judgment applicable to their professions,” the statement read.

The statement goes on to warn against stockpiling the drugs for use in treating COVID-19 because it could create a shortage for patients with lupus, rheumatoid arthritis and other ailments for which the drugs are proven treatments. Henry Ford Health System in Michigan treated 800 COVID-19 patients with hydroxychloroquine in March.

CLAIM: Smithfield Foods was sold recently to China. The hogs will still be raised in the U.S., but slaughtered and packaged for sale in China before being sent back here.

THE FACTS: Smithfield Foods does not import any products from China to the U.S. Social media users began resharing the false claim following the closure of a Smithfield Foods pork processing plant in South Dakota on Sunday due to hundreds of employees testing positive for the coronavirus. The false claim has been circulating online since 2014. Smithfield Foods was sold to Chinese pork giant WH Group in 2013.

Jenna Wollin, a spokeswoman for Smithfield Foods, told media outlets that the claims circulating online were false. “No Smithfield products come from animals raised, processed, or packaged in China,” she said. “All our U.S. products are made in one of our nearly 50 facilities across America. These products are produced in compliance with the strict standards and regulations of the U.S. Department of Agriculture (USDA), U.S. Food and Drug Administration (FDA), and other federal and state authorities.” Posts with the false claim, which were shared hundreds of times, told social media users to “read this before buying meat.”

THE FACTS: The flames captured in the video were added through a digital effect. In addition, Apple has not yet launched 5G capable phones yet. A video surfaced on social media with claims that electromagnetic waves from a 5G iPhone can set steel wool on fire. In the video, an iPhone is surrounded by steel wool.

When the phone receives an incoming call, the wool appears to catch fire. The video has been manipulated. When viewed frame by frame, a quick transition can be seen just before the steel wool begins to sparkle with what appears to be flames. The video showed up in January on social media, and it reemerged recently as conspiracy theories began circulating around 5G wireless service and the coronavirus pandemic. While Apple has not launched 5G capable phones, experts say a ringing cellphone would not set steel wool — which is highly flammable — on fire.

“The phone itself doesn’t emanate some massive power,” Muriel Médard, professor of electrical engineering at Massachusetts Institute of Technology, told the media outlets in a telephone interview. “It couldn’t even if it wanted to.” She also emphasized that 5G wireless is relying on fairly conventional systems. People have been using these wireless frequencies already. In recent weeks, there has been a surge in conspiracy theories linking COVID-19 to the expansion of 5G wireless. There’s no evidence to support any link between the two, as has been reported.

THE FACTS: The video was filmed in Jerusalem in November 2017, when a group of ultra-Orthodox Jews were protesting compulsory military service. A Twitter user shared a video of a group of people in a street being blasted with a powerful water cannon, claiming the incident occurred in New York City during the coronavirus pandemic. “In Brooklyn, NY there was a Jewish funeral and the police went to stop them so they started to protest.

NYPD brought in a Firetruck,” the user falsely claimed. The video, captured on November 26, 2017, during protests in Jerusalem, can be found in media archives. According to media reports, Israeli police doused a crowd of protesters with “skunk” spray — water mixed with a foul-smelling chemical — to clear a road they were blocking. Due to the pandemic, limits have been placed on social gatherings, including religious observances. Several weeks ago, fire department officials in New York gained public attention when they broke up a large Hasidic wedding. Orthodox Jewish leaders, however, said at the time that their communities are discouraging group gatherings.