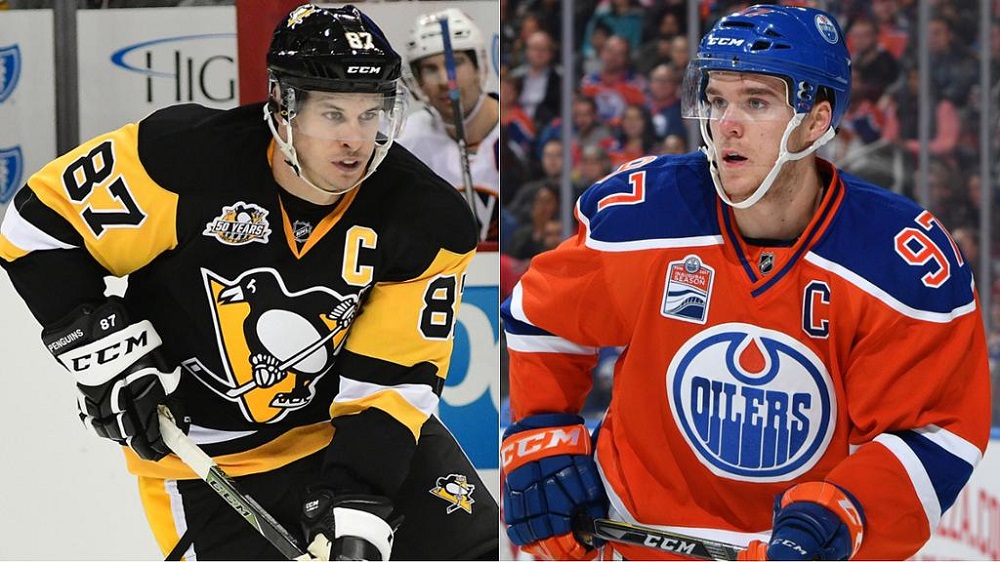 The Pittsburgh Penguins and the Edmonton Oilers are both in hot divisional races. The Pens are involved in a three-way race for the Metropolitan Division while the Oilers are likewise in a three-way race in their own division. With each team still facing the prospect of a third-placed finish in their division, and an away series to open the playoffs, each team has much to play for in the dying weeks of the regular season. However, a major subplot with each team has to do with the MVP race.

At this point, the Hart Memorial Trophy looks like it will go to either Sidney Crosby or Connor McDavid. The scoring race is very close at this point and whoever wins it should definitely earn some extra points with the voters. Heading into the weekend, McDavid has 87 points while Crosby has 82. That’s a fair edge for the Oilers’ player, however the race is far from settled. Furthermore, Patrick Kane of Chicago and Brad Marchand of Boston are in the picture with 81 points and 80 respectively.

When it comes to goaltenders in the picture, it should be said that they rarely win the MVP award. That is perhaps a little strange since no one logs more ice time than the goalie. Perhaps the fact that they have their own award, the Vezina Trophy, is the reason for that. Furthermore, comparing achievements between skaters and goaltenders can be difficult as they do very different things. But if you were to submit one netminder for consideration with two weeks left in the season then it would have to be Sergei Bobrovsky at this point. Entering the weekend, he leads the NHL in goals-against average (2.02), wins (39), and save percentage (.932). Bobrovsky is the frontrunner for the Vezina, one that would be the 2nd of his career.

As is the case with all MVP awards, there’s an annoying question of what to consider. Sticking with the skaters, are goals more important than assists? There are plenty of times, especially with secondary assists, when all a skater does is touch the puck ahead of the goal-scorer doing most of the work and that puck-touching skater still gets credited with a point all the same, one that’s not hard earned. That Crosby has 42 goals this season certainly makes McDavid’s total of 26 look small. The Oiler is assists-heavy with 61 of them buoying his total. Those that support Crosby for the MVP, or even Marchand, over McDavid certainly have a leg to stand on. In fact, both the Penguin and the Bruin have outscored McDavid by double digits. If you confer more to scoring goals than tallying assists, as I think you should, then McDavid’s candidacy takes a bit of a hit.

Another question is scoring average. From this point of view those that favor Crosby for the Hart Memorial Trophy have something to point to again. Crosby leads the league in points-per-game at 1.21. That has to be a grimacing point to take for those that favor McDavid. After all, scoring average didn’t win McDavid the Calder last season even though he was the best rookie from that point of view. McDavid had too much missed time due to his broken collarbone. Crosby has, in fact, missed time this season. However, the total missed games is few for him while McDavid missed half a season in 2015/16.

Another stat to look at is an important one: plus/minus. With assists and goals pertaining to offense, plus/minus factors in defense as well. If you’re on the ice when an even-strengthed goal or shorthanded goal gets scored on you, your plus/minus goes down. Likewise, it goes up when you’re on the ice when your team scores an even-strengthed goal or a shorthanded one. Bodychecking, hustle, an uncanny ability to lift a guys stick just before he shoots, blocking shots, winning face-offs, and everything that might possibly prevent or contribute to a goal ends up reflected in your plus/minus. Of the four skating MVP candidates, Connor McDavid is the best so far at +23.

McDavid and Crosby are close, but arguably McDavid is doing more with less when it comes to linemates. Crosby is on a great team, one that is +51 on goal differential, and one that has already eclipsed 100 points on the season. McDavid’s Oilers are contenders in the weak division, and his supporting cast isn’t as strong as Crosby’s. With personal plus/minus reflecting on teammates, McDavid’s plus/minus is better than Crosby’s despite the former having inferior teammates. That’s a major feather in the Oiler’s cap in my view.

Semantics are a big part of the Hart Memorial. Some people interpret it as “best player in the league” while others think it should go to the player that’s most valuable to his team. If you take the latter point of view, then it increases the MVP candidacy of the strong players on the crap teams. Maybe give the award to Nikita Kucherov or Mark Scheifele. After all, the former has 78 points this season, and the Tampa Bay Lightning are a below-average team to date. If you argue the most-value-to-team perspective, the argument could be made that Kucherov is so valuable precisely because he’s on a low-ranked team and accordingly that he should get the MVP award. Likewise, where would the Winnipeg Jets be without Scheifele? The Oilers, Penguins, Bruins, and Blackhawks have at least some supporting cast while the Stamkos-less Lightning have little, as do the Jets.

But I don’t like the most-value-to-team perspective and just look at the best player. Everything balanced, I think McDavid is the slim leader heading into the last couple of weeks. Not missing time, leading in scoring, and having the best plus/minus of the contenders despite playing on a team that’s not star-studded are his major points. If you do look at who is more valuable to his team then surely you would take McDavid as well over Crosby and Kane, perhaps not Marchand. McDavid is playing in his first full season, and the Oilers are playoff bound, somewhere they haven’t been since 2006. That speaks volumes to his value to his team, doesn’t it?

Prediction: I don’t back-down from my pre-season predictions until they’re completely debunked, so I’m sticking with McDavid.