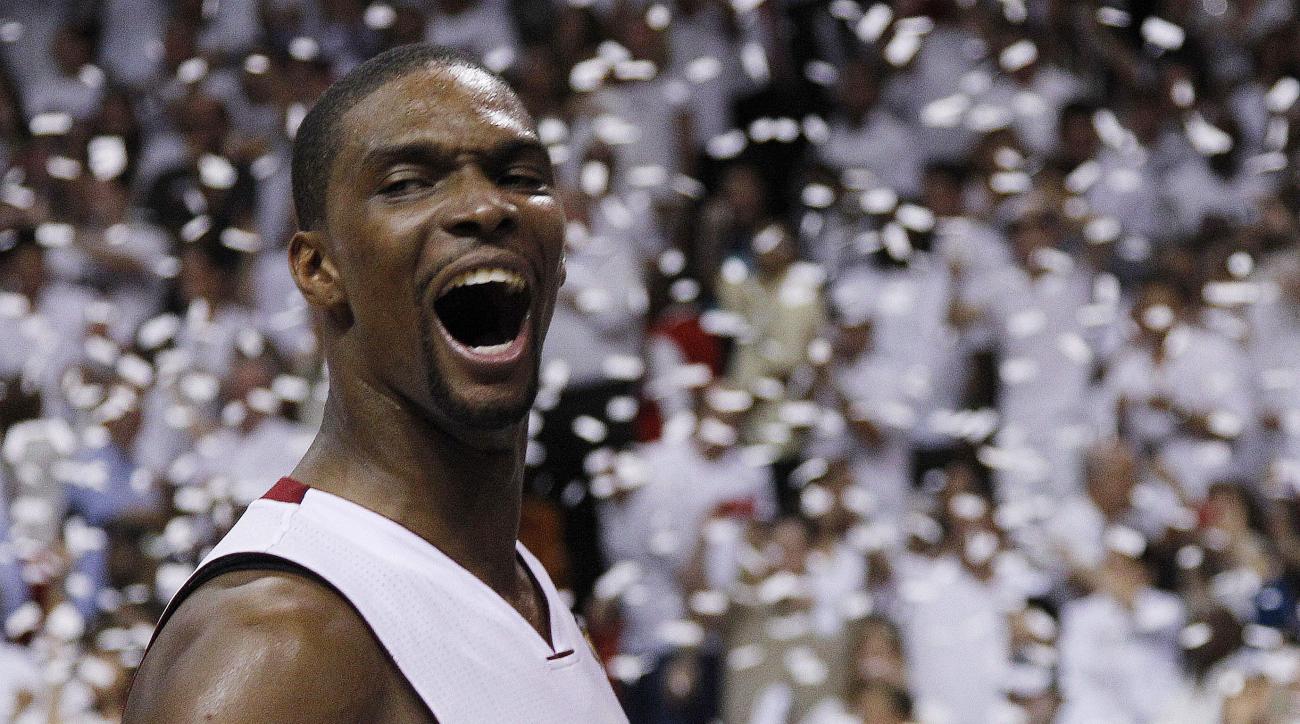 After suffering from blood-clot issues, Chris Bosh’s time with the Miami Heat is officially over. Some have forgotten that he helped bring the team to four straight NBA Finals less than ten years ago with Dwyane Wade and LeBron James in 2010.

James and Wade have continued in the NBA, but they made sure to acknowledge his accomplishments.

Weeks after the sides came to a final agreement on how to part ways and more than a year since his last NBA appearance because of blood-clot issues; Bosh was waived by the Heat on Tuesday.

The move was a formality.

It gives Miami access to $25.3 million in salary-cap space for this coming season, which the Heat will use to sign free agents starting Thursday. Bosh still gets that salary, plus $26.8 million for next season, and in theory could continue his career – if another team declares him fit to play.

It’s unknown if that will happen.

But at least there’s finally closure on his Miami era, and the Heat announced his No. 1 jersey has been retired.

“Chris changed his life and basketball career when he came to Miami,” Heat President Pat Riley said. “And he changed our lives for the better, in a way we never would have imagined when he joined the Miami Heat. We will forever be indebted to CB for how he changed this team and led us to four trips to the NBA Finals and two NBA championships.

“He is, without a doubt, one of the greatest players in the history of the franchise.”

Bosh signed a five-year deal to stay with the Heat in 2014, shortly after LeBron James left Miami for a return to Cleveland. James, Bosh and Dwyane Wade went to the NBA Finals in all four of their seasons together in Miami, winning titles in 2012 and 2013.

Bosh’s last Miami deal was worth $118 million. For that, he was only able to play in 97 games.

“You always want what’s best for Chris, whatever that is,” Heat captain Udonis Haslem said earlier this year. “I know how difficult this has been for him.”

On Tuesday, after the news broke, many players – James and Wade included – tweeted out their well-wishes to Bosh.

“An unbelievable teammate and one of the best dudes out there,” wrote former Heat forward Mike Miller, a part of Miami’s 2012 and 2013 title teams. “Thank you for the 2 rings.”

Bosh appeared in 44 games in 2014-15, his season ending at the All-Star break when the first known clot episode started. A year later, he played in 53 games and – in an eerie similarity – his season again ended at All-Star weekend, when another clot was found shortly after he landed in Toronto for the 2016 All-Star Game.

“I’m kind of getting the taste of retirement now,” Bosh said in January.

He wanted to return last season but failed a preseason physical, and the Heat made clear that they were moving on without him in their plans. Because of the sensitivity of Bosh’s medical situation, the Heat never could provide specifics – under league rule, any matter that would rise to the level of being possibly life-threatening cannot be discussed openly by teams without the player’s consent.

Even the team’s release on Tuesday announcing the waiving made no reference to Bosh’s health issues or status.

Bosh has played in 13 NBA seasons, seven with Toronto and then six with Miami. He was part of Miami’s massive free-agent haul in 2010 when the Heat not only kept Wade but landed James to form something that Riley felt could turn into something dynastic.

Bosh had a huge role in perhaps the biggest play in team history – with Miami down by three late in a win-or-else Game 6 of the 2013 NBA Finals against San Antonio, he grabbed an offensive rebound and tossed the ball to Ray Allen to set up a corner 3-pointer that tied the game with 5.2 seconds left.

The Heat would win that game in overtime, with Bosh blocking a shot by Danny Green as time expired, and then would prevail in Game 7 for the third title in franchise history.

Bosh, a certain future member of the Basketball Hall of Fame, has averaged 19.2 points and 8.5 rebounds in his career.

“We can’t wait to someday hang his jersey in the rafters,” Riley said. “Today, we are both moving on, but we wish Chris, Adrienne and their family nothing but the best. They will forever be part of the Miami Heat family.”