Even if you don’t know Chloe Sevigny from Larry Clark (Kids) and Harmony Korine’s (Gummo) indie films of the 1990’s, you more than likely have seen her on television in shows like Ryan Murphy’s American Horror Story: Asylum or HBO’s Big Love

Most film greeks were introduced to the versatile actress in her stunning (and shocking) debut as an HIV-infected teen in Larry Clark’s button-pushing drama Kids in 1995. Sevigny has portrayed nearly every type of character imaginable. The versatile actress/fashion icon has depicted the Midwestern girlfriend of a trans man in 1999’s Boys Don’t Cry, the dowdiest sister-wife of a polygamist on HBO’s series Big Love, a scheming Jane Austen social climber in 2016’s Love & Friendship, and even a legless nymphomaniac in FX’s American Horror Story.

Now she’s found a starring role to really sink her teeth, actually an ax into. In the heroine slaying the patriarchy film Lizzie (premiering in the U.S. Drama Competition), Sevigny takes on ax-wielding anti-heroine Lizzie Borden. Known to most as the parent-chopping up young woman from the famous rhyme, Borden allegedly murdered her father and step-mother at their home in Bedford Falls, Massachusetts in 1892, resulting in what was described as the “trial of the century” and eventually her acquittal.

Proving that passion projects are called ‘passion’ for a reason, this a role and film that Sevigny has shepherded to the screen after a decade in development. The payoff is huge as she delivers one of her most gripping performances that will likely have audiences on the edge of their seats.

Critics are already giving the film kudos, and it was our ‘must see’ choice at the 2018 Sundance Film Festival.

Here’s what Sevigny had to say about making the film, Kristen Stewart and the ten-year road for Lizzie. 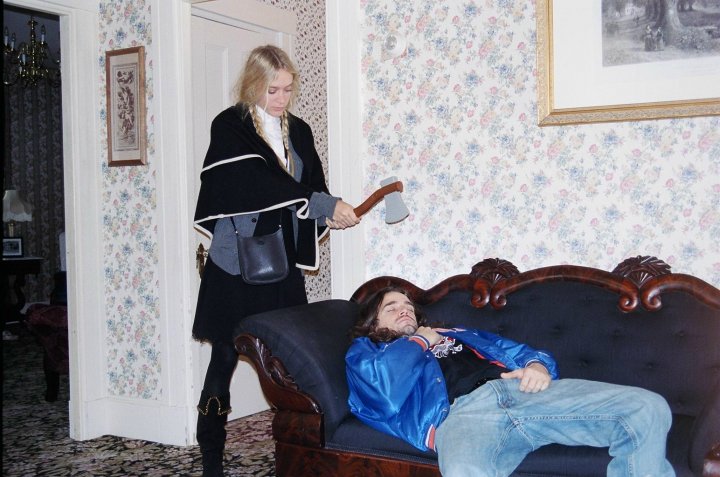 You’ve been attached to play Lizzie Borden for a decade as the project underwent various incarnations. Can you talk about the long journey to make this story into a feature film?

Oh God, it’s so long and involved. [Laughs] It began the first time I visited the bed and breakfast in Fall River [the house where the murders took place is now a bed-and-breakfast/museum]. I was driving through Massachusetts with my boyfriend at the time, we were going to stay at the house and then go to Salem, for a spooky Halloween/romantic weekend getaway. As soon as I walked into that house, it was a moment that crystallized, and I knew I had to play this person. I felt so empathetic to her plight. Her story is so fascinating, because there are so many different theories and it’s still unsolved. The world has been fascinated by her for more than a hundred years now. She still inspires so many books, films, operas, and so many other things. She’s iconic as this misfit heroine. That was the moment that I realized I needed to do this.

This is obviously a passion project. How did you begin the process of turning it into a movie?

I was living with my friend Bryce Kass in Los Angeles as roommates. He was a struggling writer so I asked him to write it. He wrote an outline, and there was so much exposition, and we learned so many things––such as the police were at a picnic so many miles away. There were so many amazing details we could put in this story that it was hard to figure out how we wanted to do it. I was on Big Love at the time and very close to Peter Friedlander [a producer on the HBO series], so I took it to him, and he said we should pitch it to HBO. At that time—this was 10 years ago—they’d have given us more money and exposure and more people would see it on HBO than if it we made it as an indie film. That made more sense to me, you know? We pitched it, and it was there for a while. They held onto the material for a very long time. Bryce had to rewrite it as a miniseries. It was at various times a two-part miniseries and a three-part miniseries. Then they put us on the backburner over there and then picked us up again and had so many directors attached. In the end it just didn’t work out for us. We couldn’t pitch it to other networks for a variety of reasons that I had no idea about because I was so green to this whole process. The next time I’m going to have a lawyer that holds my hand through every step because it’s totally insane.

But your endurance eventually paid off.

Eventually, we had to reconceive it back to a feature and try to produce it independently ourselves. We set up a lot of meetings and sent it out to a lot of directors. I was attached and Kristen [Stewart] was kind of attached, so it’s hard to go to visionary directors who are working on their own projects when you already have actors attached. We watched Craig Macneill’s films and had conversations with him. He was actually from a place very near Fall River and had a very personal connection to Lizzie, so we decided to go with him. We found some independent financiers and set up some foreign sales and put it together. It came together really quickly.

You were born in Massachusetts, which is Lizzie Borden country. When did you first become aware of her?

I first became aware of her with the rhyme in probably junior high, or maybe I was younger. I didn’t know much about her. I was out one night for Halloween in the city, and one of my best friends was dressed as her for Halloween, so I delved into it.

What was the appeal of her story for you?

First of all, she was so misunderstood and didn’t have any real outlet. I was very empathetic to that. I wouldn’t say she’s crazy in any way, shape, or form. I just think she was disturbed. Playing a subtly disturbed person was something I’d never done before, and that interested me as an actor.

What research did you do?

I stayed at the house in Fall River several times. I went once on my own, once with Bryce, and once with the friend who had dressed up as Lizzie for Halloween. [Laughs] We went to her final resting place in Fall River and walked around Bedford. I went back with Craig and our cinematographer and art director to do more research at the Fall River Historical Society. It was very helpful in creating a fully realized version of her. We saw her objects, and they gave us permission to use a photo of her mother in the locket. I’ve read almost every book about her, and there are a lot. I actually read about different women at that time—even Emily Dickinson. There’s a great bio about her life and being imprisoned in her house, which gave me insight into what life was like in that period. My research was pretty extensive.

You really exhibited palpable rage when you were swinging the ax. How do you prepare psychologically to play a scene like that?

I’d prepared for that for 10 years now. I was naked in that scene, and now I’m sleepless every night. [Laughs] I’m 43 years old, and I can’t believe I did that. It’s not that I regret it because I wanted it to be very carnal and shocking, but now I feel pretty vulnerable, in all honesty. It’s my opinion and the writers’ that she did it and there are a lot of people who argue that she didn’t. There’s a theory that she went into an epileptic state of shock.

Lizzie has a romantic relationship with Bridget, the live-in maid, played by Kristen Stewart. How fact-based is this?

That’s not very fact-based. There are a lot of accounts of her having affairs with other women, especially Nance O’Neill, who was an actress. There are theories that that’s why she and Emma, her sister, didn’t speak to each other for the last years of their lives. We took liberty with that. There is evidence that Bridget was in cahoots and had to have been in the house [when the murders occurred]. Maybe those ladies did have one of the friendships that some women during that time period had, that were more intimate because they didn’t have anyone else. I think that after spending time in the house, we determined there was no way Bridget couldn’t have been in cahoots.

It’s a film that’s time has come in more than one way. Both Lizzie and Bridget were abused by a man in the film. How do you think the film will resonate in today’s climate when the #MeToo and #TimesUp movements are calling out unacceptable behavior by men?

Since all of this has happened recently, well, I mean I’ve always thought of this film as a smack in the face of the patriarchy. It’s extreme, and it’s violent and it smashes the face of the patriarchy. That was how I pitched it 10 years ago. Putting more women in power is the only way to protect young girls. I think men will always abuse them and the more they’re called out and held accountable the less likely they’ll be to act untowardly to women––so women need to be in more positions of power. That’s the only way to shift the dynamics. There’s more of a weight and importance to films now. Even like Beatriz at Dinner [her film which premiered at Sundance in 2017], which is about so many different things now. I’m really lucky to be a part of films that reflect what’s happening in today’s society.

There’s been a call for Hollywood to hire more female directors. You’ve directed a couple of shorts. Do you plan to direct a feature eventually?

I hope to. I’m making another short in April, which is about women and their relationship to the power. I’d like to direct a feature if I find the right material. It’s all about having the right material and being impassioned about what you want to say and what you want to do. I’ve worked with strong female directors like Kimberly Peirce on Boys Don’t Cry and Mary Harron on American Psycho. Whenever you have a project that you’ve just got to get out, it always elevates it. It enters into the zeitgeist and becomes something even bigger.