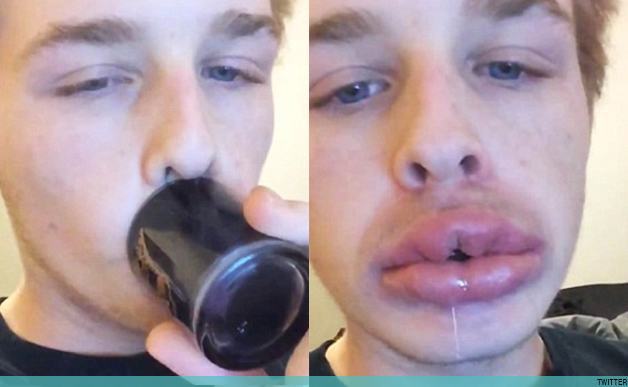 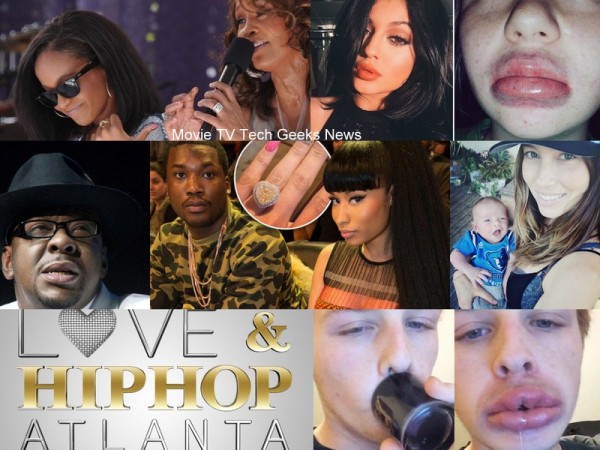 A new round of celebrity craziness and sadness arrives a day late, but you can check out our editor’s note below to see why. Bobby Brown sadly wishes Bobbi Kristina Brown were awake and tells concert goers she is but Cissy Houston reverses that. Then Kylie Jenner’s lips have sadly created a very unhealthy challenge that she isn’t responding to. 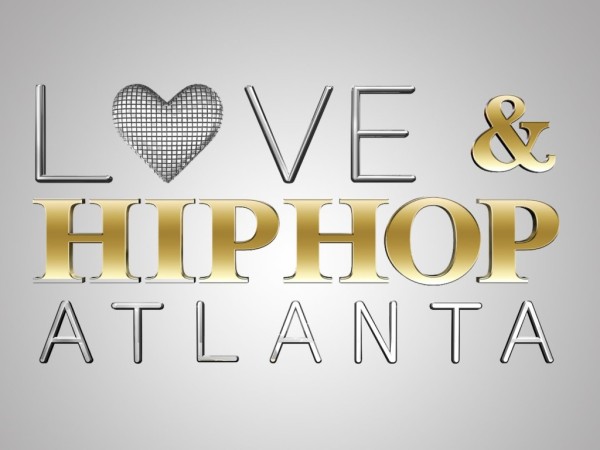 For all you love and Hip Hop fans, New York may be over but you know that is not the end of it. Atlanta starts up today and from the trailer, it looks like it is going to be one hell of a season.

I personally prefer New York over any other franchise so I am not looking forward to ATL that much (although you know I am going to have the recaps for you). Nonetheless, we will have the drama, we will have the fighting, we will have the unbelievable actions of grown people. All I as is that you don’t go out and try to replicated what you see. Don’t drink the Kool-Aid. 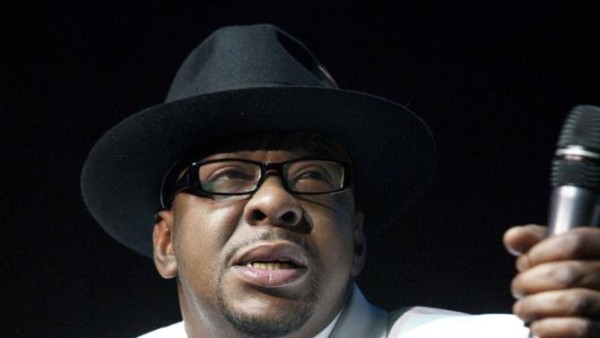 It hasn’t really been in the news lately, but the situation with Bobbi Kristina is still going on. We have been sending prayers, thoughts and more her way and we plan to hold on with the family until something happens.

We were given a glimmer hope when her father Bobby Brown said during a concert on April 19th in Texas were he let the audience know that Bobbi Kristina is awake.

“I can say today Bobbi is awake. She’s watching me,”

This is amazing news and it is surely something people are very happy to hear. Of course no one is as happy to hear it as the family. Confirming Brown’s statement, Tina Brown wrong on her Facebook page:

“So many messages, sorry can’t answer them all right now but I will get to them later…Just allow me this time with my family, yes, she woke up and is no longer on life support!!!!!:):)God is good!!Thanks for your prayers,, still a process, but she is going to be ok:):):):).”

There are no words for how much this warms my heart. For those that believe in prayer, it really does work. The family has yet to release an official statement which I can totally understand why. For now, all we have it word from Brown and his sister and that’s enough for me. 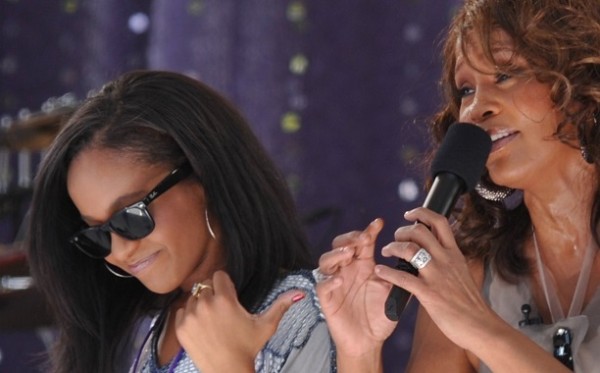 Bobby Brown wound up admitting he was a little emotionally charged when he made these statements which turned out to be false. Shortly after he said this during a concert this past weekend, a more reliable source, Cissy Houston, quickly corrected things.

Bobbi Kristina Brown was hospitalized Jan. 31 after being found unresponsive in a bathtub inside her Georgia home. She remains in a long-term care facility.

“I have just returned from visiting my granddaughter Bobbi Kristina in the hospital and while she is no longer in a medically induced coma she has a tracheotomy and according to the doctors she has global and irreversible brain damage and remains unresponsive,” Houston said in a statement to People this week, adding, “Meeting with the doctors and understanding that she can live in this condition for a lifetime truly saddens me.”

A couple of days later his lawyer, Christopher Brown, clarified those comments, saying, “Bobbi Kristina’s condition has changed since moving from Emory University Hospital and there has been improvement. Doctors have indicated that she will have a long life. However, Bobbi Kristina is presently embarking on a rehabilitation process and the quality of her life will not be known for years to come.”

Meanwhile, Bobby Brown’s wife, Alicia Etheredge-Brown, notes that Bobby Brown was in an “emotional state” while onstage and made his statements regarding his excitement about his 22-year-old daughter.

“My husband made an attempt to correct the negative comments he must endure on a daily basis from both family and the public regarding his daughter’s medical condition,” she said, noting that Bobby Brown is encouraged by the steps Bobbi Kristina Brown has taken since entering the hospital in January.

So sadly, Bobbi Kristina Brown remains in the same condition. We are running our usual Celebrity Gossip Monday edition one day late so we were able to correct the errors in this article.

We have also pulled this part of the video section out of this edition of Celebrity Gossip on our YouTube channel as it is also full of wrong information that was not corrected. You’ll notice it will be a little shorter than usual. 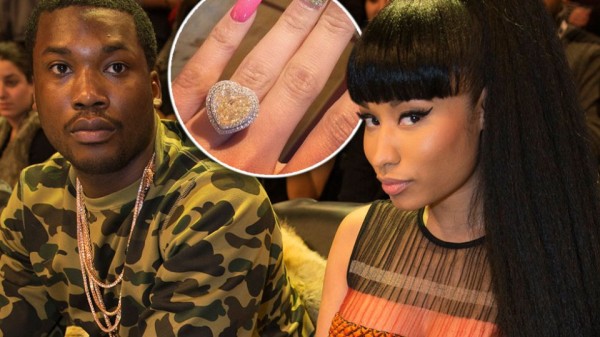 So much has swirled around on the gossip sites about these two. They are together they aren’t together, they are just friends, their lovers. Recently Meek Mill opened up about his true feelings for the rapper/singer and says that she was the one holding him down during is stint in jail last year.

Rumors about their alleged engagement started last week when Nicki posted a picture on a gigantic 15 caret heart shaped yellow and diamond ring (which is estimated to cost about $500,000) on her Instagram account (yes it was on the ring finger). Of course everyone immediately screamed of intended nuptials.

It also didn’t help the couple if they are indeed trying to keep their engagement on the low, low when Drake all but confirmed that they are soon to be husband and wife. During his performance at Coachella he made a big fuss and congratulated her.

Okay so he didn’t come straight out and say it but we are pretty sure that what his excitement was all about. Plus, when the two hugged, the audience was blinded by the bling on her finger, which dispelled light from each and every angle.

Meek Mill is a dope ass rapper and Nicki does her thing too so congratulations to the both of them. 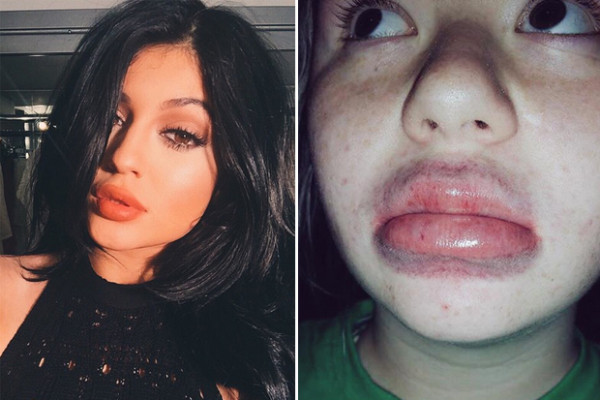 Girls Go to Extreme to get Kylie Jenner Lips

So you know how stupid people can be with all the gimmicks they try in order to look like the current “it” celebrity. Well, add to the list plumping their lips to look like Kylie Jenner.

These stupid ass chicks (I don’t care that they might be teenagers… their stupid) are actually putting their lips inside a bottle to swell them up so they will have Jenner’s “signature” pout lip. 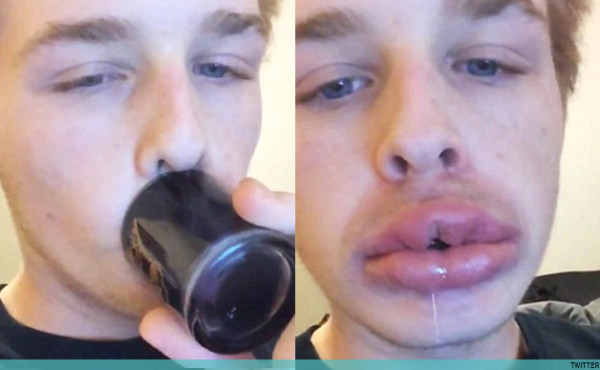 This is what everything that is wrong with the world. Impressionable young people ( hell even adults) do whatever they can to look like celebrities who just go and have plastic surgery to fool everyone anyway. They are even coining it #kyliejennerchallenge.

I bet that the “challenge” originated from the Kardashian/Jenner camp and is probably some kind of social experience to show how far gone our society is with that whole crew.  Ugh it just burns me up… Stop being stupid people!

Sadly, the person these teens are doing this for has kept mum on the subject, or at least mom Kris Jenner is scrambling with her pr team trying to figure out the best thing to say. The best thing to say is just have your daughter come on showing that she cares and tell kids it’s not healthy to do this. Pretty simple, but sadly, Kris Jenner seems to instill no type of sensible morals in her children/pieces of talent. 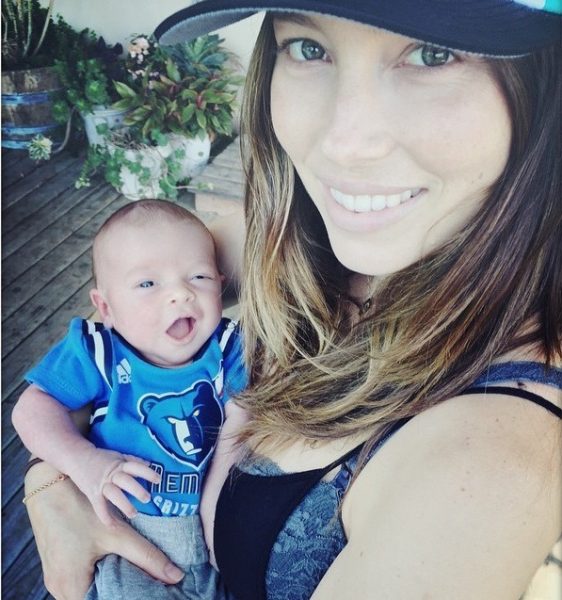 These two gorgeous people are just high on life right now. Jessica Biel recently gave birth to their son Silas and he is just the cutest little bundle of joy. I particularly love his name too.

They gave us look at his first public pictures on Justin Timberlake’s Instagram account (the picture has 1.2 million likes as of yesterday) and you can just see the joy and love that these two have for their son.

I am happy for them and glad that JT finally settled down and created a sweet little offspring to carry on his legacy.