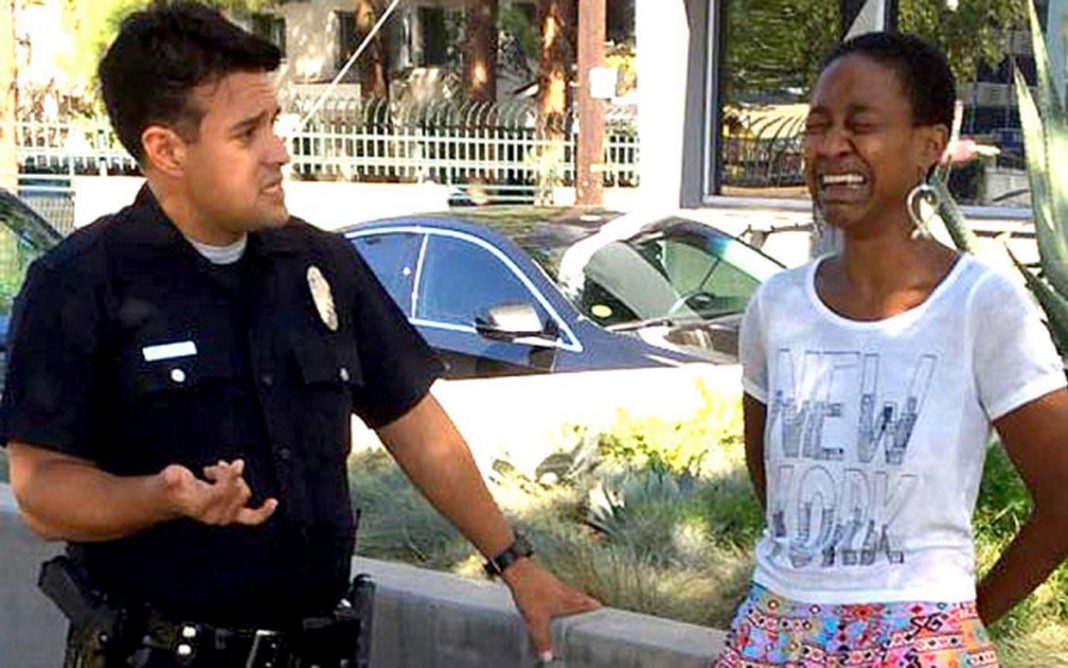 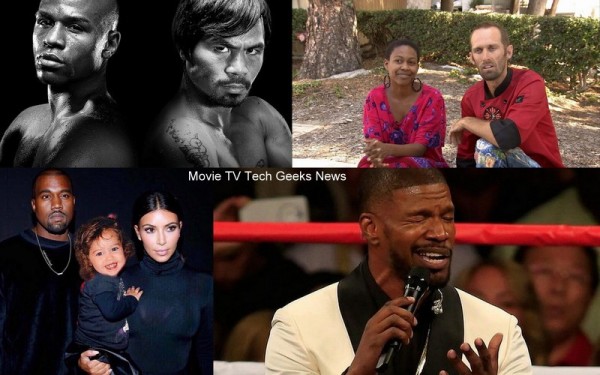 It’s almost the middle of the week and so many interesting things happened over the weekend and yesterday starting with the Mayweather Pacquiao fight and then Kim Kardashian gets black women a little irritated with her crazy fro talk. 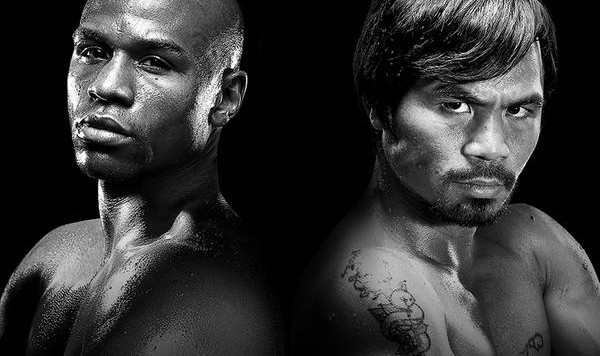 The event billed as the “Fight of the Century” went down on Saturday and for the most part it was uneventful. Of course they had the warm up fights and that lasted for forever. Then the main event happened, the arrogant, obnoxious, “undefeated” Floyd Mayweather vs. Manny Pacquiao.

It was a star-studded shindig if there ever was one. I mean I saw a picture of all the G5’s (the runway was reportedly jammed up because there were so many) that were there and all the people and it is truly amazing the world in which we live. People can obtain all this wealth, spend it on petty, material things and just keep on doing it over and over again. Once more, us common folks are the ones making them rich. Anyway, off my soapbox.

Mayweather and Pacquiao went toe to toe and… big surprise here, Mayweather won! I hate that this domestic abuser, jack ass won. People want to say that he’s the shit so he doesn’t have to be nice to people, but that’s bull shit to me. I am Team Pacman. And even though Mayweather and I share the same birthday and I usually root for people who share my birthday, I can never ever root for him. I can’t even bring myself to say congratulations. I know I sound like a hater (I am not) but forgive me for wanting to supporting a person beyond their abilities and actually caring about what they stand for. 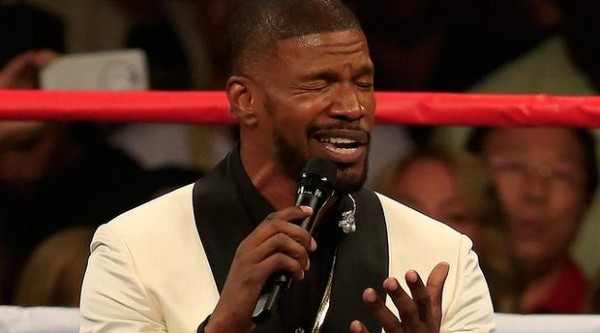 So here is the thing with Jamie Foxx -He can blow his ass off and he’s a pretty okay actor. To me, however, his element is definitely behind the mic. So when he got to sing the national anthem at the Mayweather/ Pacquiao fight, although he was in his element, his rendition was not the business. Here is why.

It sounded like he was winging it. It didn’t sound rehearsed and it came off as if the organ player was trying to follow him. Like seriously, Foxx must have said to him, “Yo… just follow, Imma do me.” It is really a shame too because the guy has got it but where he messed up is he changed the medley. When things as “sacred” as the national anthem, unless you are Marvin Gaye (and no one is) don’t reinvent the wheel. And that’s by advice to Jamie. 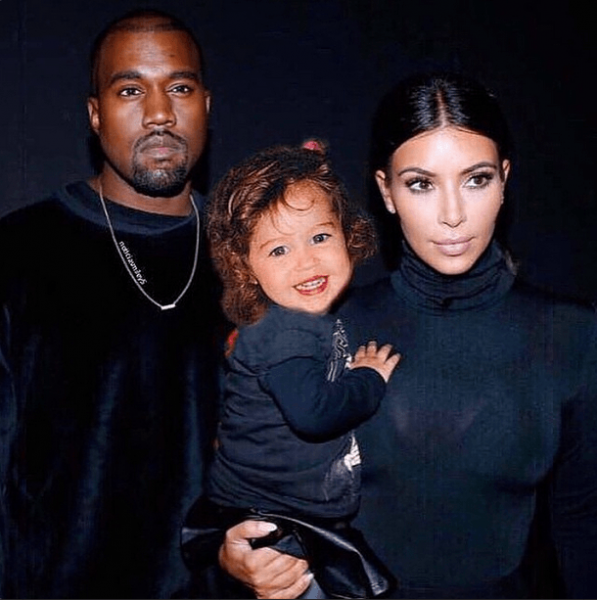 Ugh…black people come on. We don’t have to protest and march for every damn thing. A black man killed for no reason, hell yes, we are gonna be right there. Being called a black bitch or demeaned because of your color, you best believe we are going off. But an Armenia woman married to a black man and who has a black baby calling her daughter’s hair a “crazy fro?” Back the hell down black people.

We don’t always have to “go there” when someone who is not black makes a comment about one of our black features or our “traditionally black” things. I don’t ever think that Kim says or does anything that comes off racist on purpose and this is not because I am a fan.

North’s hair probably did look like a damn crazy mess when she woke up. Hell, haven’t yours? Why does she have to get flack for commenting on the hair of the child that she gave birth to? Black women (especially the naturals) need to chill the hell out. We get it, you’re proud of your natural hair state and you never miss an opportunity to let everyone know that. But everything people say about your hair should not be offensive because sometimes, that shit does look bad. I’m just saying. Moving on. 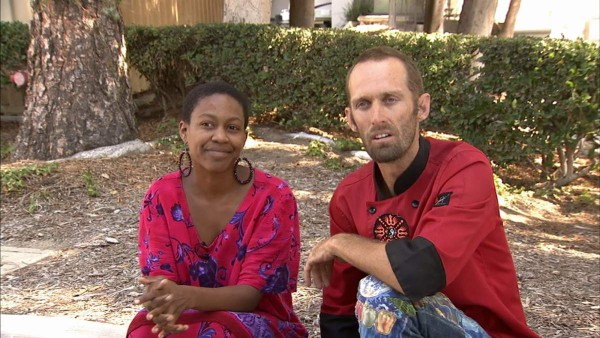 This story is interesting to me for so many reasons but mainly because my boyfriend made such a big deal about it. Daniele Watts, who had a part in the hit move Django Unchained, was caught with her boyfriend in his car doing some kind of lewd act I guess last September. She got all up in arms, called her dad on the phone while it was happening and accused the cops who responded to a complaint that she and her boyfriend, who happens to be white (she’s black) were having sex in said car.

When asked for her ID she pulled the race card (as well as the “I’m an actress” card… honestly I don’t remember her in the movie and even after Googling her I still don’t know who she is) to no avail. She went on to accuse him of a profiling of sorts because of the difference in their races. 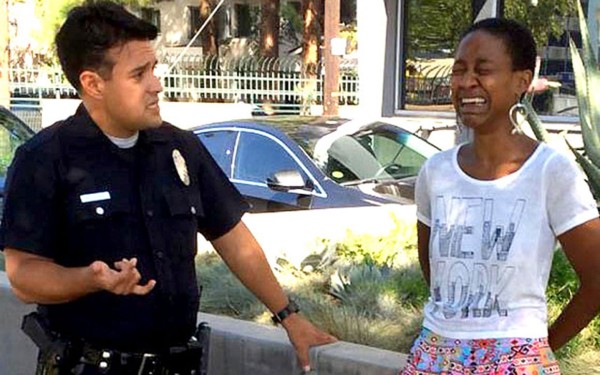 Apparently, the court disagreed with her and she has now been ordered to write a letter of apology to the cop she claimed was being racist and to do 40 hours of community service.

I think the thing that really screwed it up for her was that she went public with what happened and made it seem like they were targeted BECAUSE of their race. I don’t know. Just don’t have sex in public, or at least not in eye sigh of the CBS studios.