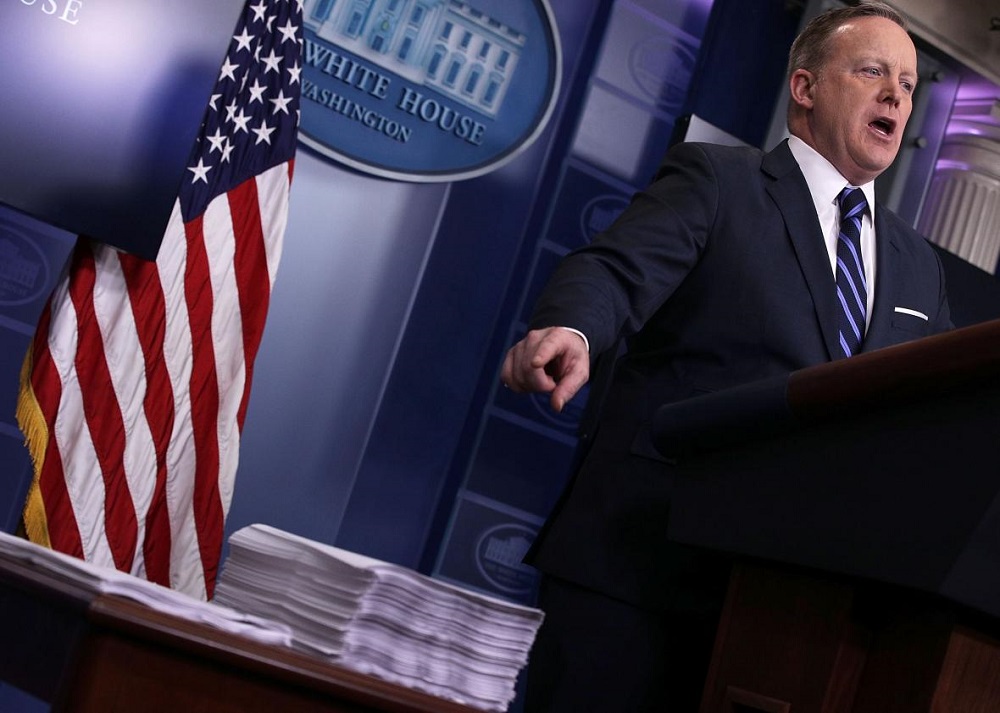 That Congressional Budget Office (CBO) report that both the White House and Republicans were denouncing came out, and the only person who seemed happy about it was House Speaker Paul Ryan as he quickly put out a tweet. The Democrats will be happy as they can show what rushing a bill as important as this results in.

The White House doesn’t seem to share Ryan’s enthusiasm as HHS Secretary Tom Price began knocking the CBO report until asked by a journalist if he was denouncing it. Price quickly did a political talk dance to say they needed to further evaluate it. Funny, news reporters had it completely broken down line by line already.

Here’s a breakdown of what the CBO report showed and then we’ll follow that up with how Speaker Ryan interpreted the report. You can be sure he’ll be looking to find all those “rainbows and puppies” that White House press secretary Sean Spicer accused Obamacare of.

“The reductions in insurance coverage between 2018 and 2026 would stem in large part from changes in Medicaid enrollment — because some states would discontinue their expansion of eligibility, some states that would have expanded eligibility in the future would choose not to do so, and per-enrollee spending in the program would be capped,” the report said. “In 2026, an estimated 52 million people would be uninsured, compared with 28 million who would lack insurance that year under current law.”

“Part of that net reduction in employment-based coverage would occur because fewer employees would take up the offer of such coverage in the absence of the individual mandate penalties,” the report said. “In addition, CBO and [the Joint Committee on Taxation] expect that, over time, fewer employers would offer health insurance to their workers.”

The federal deficit would shrink. The CBO, along with the JCT, estimated that the bill would decrease the federal deficit by $337 billion over the next 10 years. Roughly $880 billion would be cut from outlays because of the decrease in funding for Medicaid expansion, and $673 billion in spending would be cut because of decreases in tax credits, but that would be partially offset by a reduction in revenue from the mandate and other taxes from the ACA.

The individual market would remain stable. The report said the individual market — that is, people getting coverage who do not have it from an employer or government program — would remain stable if the AHCA were passed. The CBO also said that the market under the ACA was stable as well. “In CBO and JCT’s assessment, however, the non-group market would probably be stable in most areas under either current law or the legislation,” the report said.

Premiums in the individual market would increase in 2018 and 2019 before falling because of lower enrollment. The report also estimated the effect on premiums in the individual market, saying that costs would increase in 2018 and 2019 before declining. The CBO and JCT said that provisions of the AHCA would raise premiums for older Americans “substantially” while shrinking them for younger Americans. 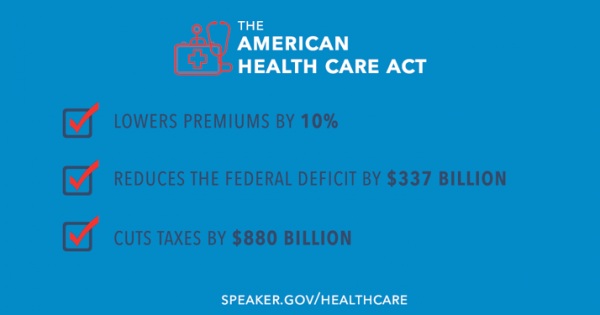 The $337 billion saved over 10 years is because of cutting Medicaid and the subsidies Obamacare is providing millions of people who are currently covered. If negotiations kick in to make this bill more palatable to Republicans staunchly against it like Rand Paul, then this number could quickly drop if they have to leave Medicaid alone.

The $880 billion tax cut comes directly from cutting it out of Medicaid. Since Medicaid is spending about $500 billion each year, this is a twenty percent cut. While it sounds like a great savings, the bulk of it actually gets funneled into ‘tax cuts’ for CEO’s. This is in the ball park of $600-700 billion.

If you recall, Donald Trump campaigned hard stating that he would not allow Social Security, Medicare or Medicaid to be touched. This touches them on all levels. 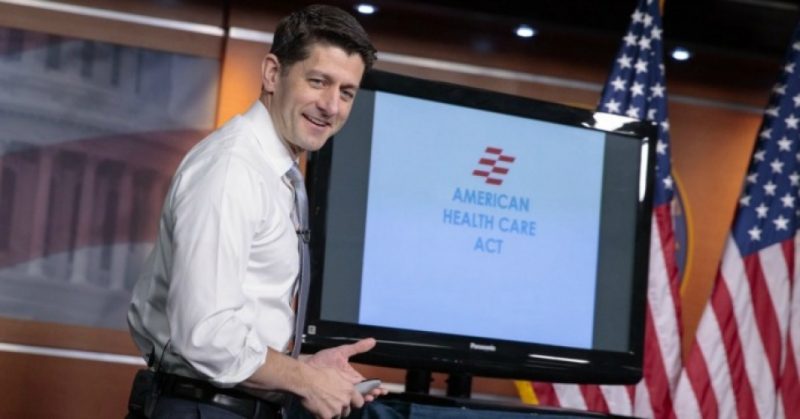 The CBO’s estimate shows that the legislation advances the core goals of our plan to repeal and replace Obamacare:

This report does not take into account additional steps Congress and the Trump administration are taking that will further lower costs and increase choices for families.

We appreciate concerns about making sure people have access to coverage.

Obamacare has proven that government-mandated coverage does not equal access to care, and now the law is collapsing. 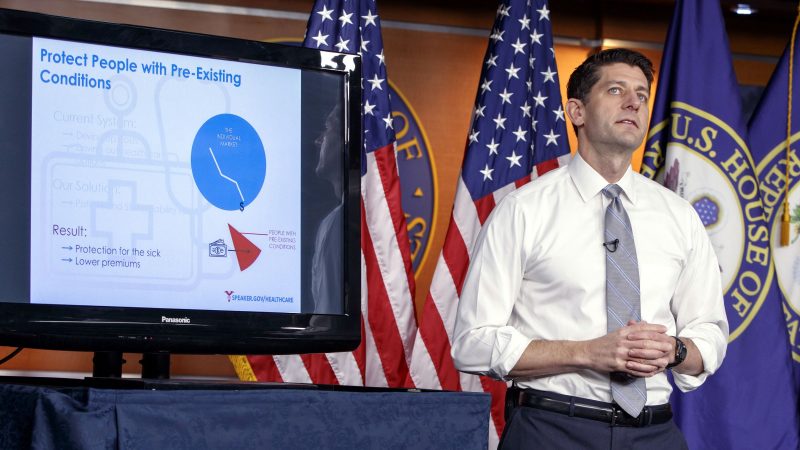 Fourteen million Americans would lose coverage next year under House Republican legislation remaking the nation’s health care system, and that figure would grow to 24 million by 2026, Congress’ nonpartisan budget analysts projected Monday. The figures dealt a blow to a GOP drive already under fire from both parties and large segments of the medical industry.

The report by the Congressional Budget Office flies in the face of President Donald Trump’s aim of “insurance for everybody,” and he has been assailing the credibility of the CBO in advance of the release. Administration officials quickly took strong issue with it.

It also undercuts a central argument that he and other Republicans have cited for swiftly rolling back former President Barack Obama‘s health care overhaul: that the health insurance markets created under the 2010 law are unstable and about to implode. The congressional experts said that largely would not be the case and the market for individual health insurance policies “would probably be stable in most areas either under current law or the (GOP) legislation.”

Even though Republican tax credits would be less generous than those under “Obamacare,” the combination of those credits and other changes to lower premiums would attract enough healthy people to stabilize markets under the new plan, the report said.

In a talking point embraced by Republicans, the budget office concluded that the GOP measure would reduce federal deficits by $337 billion over the coming decade. That’s largely because the legislation would cut Medicaid and eliminate subsidies Obama’s law provides millions of people who buy coverage.

The budget office attributed the projected increases in uninsured Americans to the GOP bill’s elimination of tax penalties for people who don’t buy insurance, its changes in federal subsidies for people who buy policies and its curbing of Medicaid, the federal-state program that helps low-income people buy coverage.

By 2026, the office estimated, a total of 52 million people would lack insurance – including 28 million already expected to lack coverage under Obama’s statute.

While long anticipated, the budget office’s adverse estimates provide a detailed, credible appraisal of the Republican effort by an agency with a four-decade history of even-handedness that’s currently headed by a GOP appointee. It feeds ammunition to Democrats and to some Republicans who’ve argued the GOP measure would toss millions of voters off coverage they gained under Obama’s overhaul.

Trump said in an address to Congress last month that he wants to “expand choice, increase access, lower costs and at the same time provide better health care,” a less expansive coverage goal that has been embraced by House Speaker Paul Ryan, R-Wis., and other authors of the GOP legislation.

The budget office found that average premiums for individuals would rise in 2018 and 2019 by 15 percent to 20 percent compared to current law, because Republicans would eliminate the penalties designed to induce people to buy insurance coverage.

But beginning in 2020, premiums would begin to fall in comparison to current law, and by 2026 average premiums for people buying individual coverage would be roughly 10 percent lower than current law.

However, premiums would vary significantly for people of different ages because of a change Republicans would make allowing old people to be charged more for insurance coverage, compared to young people, than allowed under Obamacare.