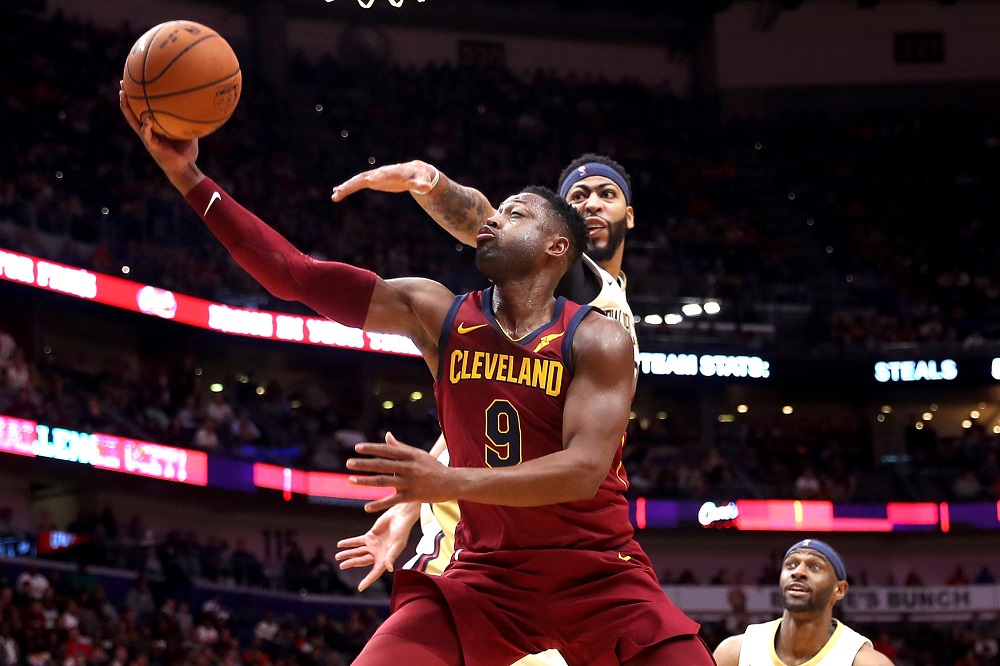 The Cleveland Cavaliers haven’t been themselves through the first few weeks of the 2017-2018 NBA season. There’s no better way to put it. While they started hot with two big wins against the Boston Celtics and Milwaukee Bucks, they have dropped “easy ones” to teams like the Brooklyn Nets, Indiana Pacers, and Atlanta Hawks.

Tuesday’s victory over the Bucks puts the Cavs at 5-6, not exactly where they envisioned they’d be this early in the season. Well, Dwyane Wade isn’t happy—after all, he came to Cleveland to play with his friend LeBron James and win a ring in the process, not to lose more than half their games. So, Wade sounded off on what he believes to be the issue: the starting lineup.

The Cavs began with Wade in the starting lineup; however, he has since been replaced by J.R. Smith. The Cavs official starting lineup (when everyone is healthy) is Jae Crowder, Kevin Love, Derrick Rose, J.R. Smith, and, of course, LeBron. The team also boasts a good amount of depth with guys like Tristan Thompson, Kyle Korver, Wade, Iman Shumpert, and Jeff Green coming off the bench. Then, of course, Isaiah Thomas will be starting soon.

But, the talent in front hasn’t been doing enough, and Wade feels like his second unit is always trying to climb out of a hole.

“I told the guys, every time I’ve come into the game besides one game, it’s been a 10-plus hole that we’re trying to dig out of,” said Wade. “We’re confident in our second unit, but we don’t want all that, not every time. It’s still early, and we’re still trying to figure it out, but you still want to find a way to win games like this, no matter if you’re trying to figure it out because you’re talented enough. We’ve just got to have more of a sense of urgency. Our sense of urgency and our energy have to be better.”

I do have to wonder where LeBron is in all this. Traditionally, James is a fantastic leader who isn’t afraid to call out his team to the press. I’m sure he’s been getting on them in the locker room, but a little public humiliation isn’t necessarily a bad thing sometimes.

Smith, who got his previous starting slot back from Wade earlier this season, agreed with the veteran’s comments, reiterating that the first team needs to set the tone.

What Smith didn’t do, however, is offer a solution, or even diagnose the problem past “we’re bad right now.”

“I don’t know if it’s a lack of mentality or what, but it starts with us,” continued Smith. “We’re the first guys, and we get the first crack at it, and we give up way too many points. By the time the second unit comes in they’re supposed to be trying to extend the lead or push the lead further, and we’re just putting them in a deep hole.”

Kevin Love, the team’s leading scoring threat behind LeBron, agrees with Wade as well, but he doesn’t have an explanation either.

“I don’t know where the lack of—I don’t know if it’s focus or energy. I saw what Dwyane said. He’s exactly right. It would be nice if we were able to get on the second unit one time for giving something up, but that hasn’t been the case…We just can’t keep putting ourselves in a situation like that.”

That’s all fine. The players aren’t expected to find the solution themselves when situations like this one arise. Sometimes players and teams go into a slump. In this case, head coach Tyronn Lue is the one that needs to be ready with some adjustments or solution to the Cavs early woes.

Maybe it’s a lineup change or a roster shakeup, but Lue is the one that needs to start throwing out solutions quickly. After all, the Cavs have never been afraid of firing coaches on a whim—that’s how Lue got his job in the first place.