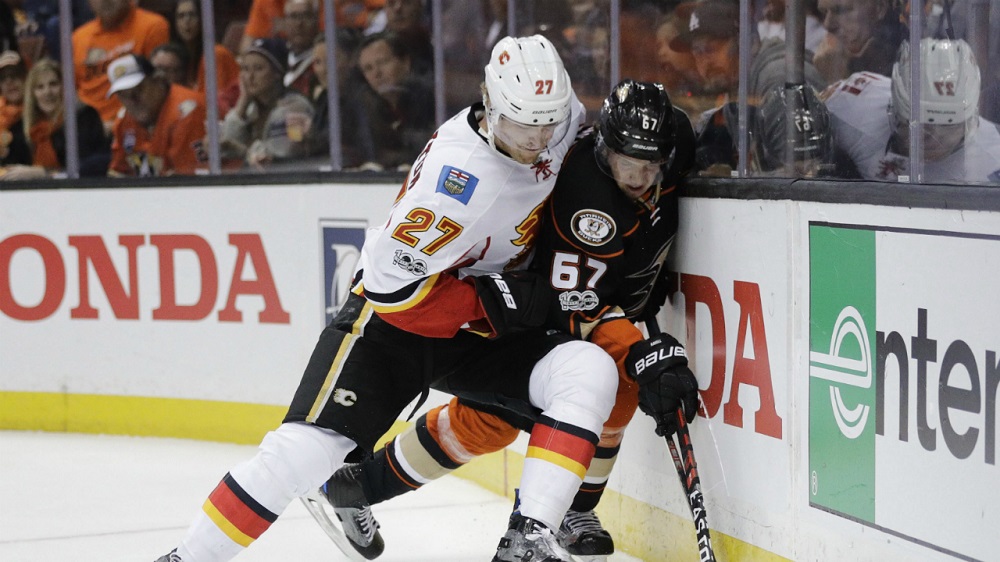 The fans of the Calgary Flames were often crying foul after games one and two of the franchise’s NHL-playoff series against the Anaheim Ducks. The Flames had 11 penalties called against them in the two games combined, a high total that played a role in Calgary falling behind 2-0 in the series. The Flames are facing a 0-3 deficit following a loss on Monday night from Alberta, a game that saw Anaheim receive no powerplays. That could make it hard to blame the officiating, however, one call in the game stands out still as the Ducks were awarded a goal that many think should not have counted.

With Calgary leading 4-2, Anaheim’s Nate Thompson redirected a point shot that found the back of the net. The problem with the goal is that Thompson used what might have been a high stick. The NHL’s high-stick rule when it comes to puck contact is that the stick can’t be higher than the crossbar or a player’s shoulders, which is 4′ off the ice when making contact with the puck. Thompson’s stick appears to be over that height, especially when you consider that the blade of the stick was curving upwards. However, the point of contact with the stick is the factor to be aware of and not the stick’s highest point.

“At 11:14 of the third period in the Ducks/Flames game, video review confirmed that Nate Thompson’s stick was at or below the height of the crossbar when he deflected the puck into the Calgary net. According to Rule 38.4 (vi), ‘The determining factor is where the puck makes contact with the stick in relation to the crossbar. If the puck makes contact with the portion of the stick that is at or below the level of the crossbar and enters the goal, this goal shall be allowed’. Good goal Anaheim.”

The one issue I have with the statement is that it claims to confirm that the stick wasn’t high. The standard for video replay is that there has to be perfect clarity to overturn a call on the ice. Camera angles aren’t always perfect when it comes to getting the perfect shot. I think inconclusive is the right word to use here and that the call on the ice therefore stands.

That's a good goal. In the sport of Jai Alai. Or lacrosse maybe. Hockey, not so much.

Calgary Flames fans are naturally angry, but the reaction to the call hasn’t just been a poor one from the point of view of grass-roots fans. Hall of Famer Grant Fuhr, best remembered for his days with the Edmonton Oilers, is one high-profile athlete that tweeted about the call: “Somebody doesn’t want Calgary to advance bad call on the high stick should have been no goal.” In another Tweet he tells NHL Public Relations that they got the call wrong. Doug Dirks with the Canadian Broadcasting Corporation addressed the goal as well: “That’s a good goal. In the sport of Jai Alai. Or lacrosse maybe. Hockey, not so much.”

The worst of sports is when one side loses and feels as though it was a result of a Stampede Wrestling-like screw job. The bottom line is that Calgary face a 0-3 deficit that will be nearly impossible to overcome going forward. Meanwhile, the other Canadian-based teams have taken 2-1 series leads after they all lost their opening games.