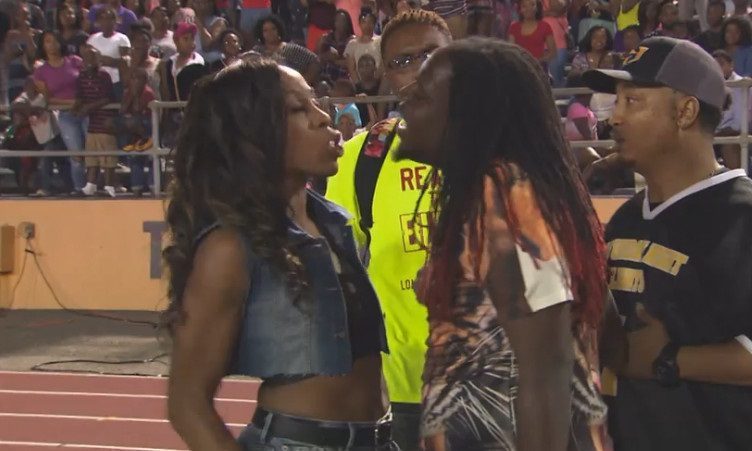 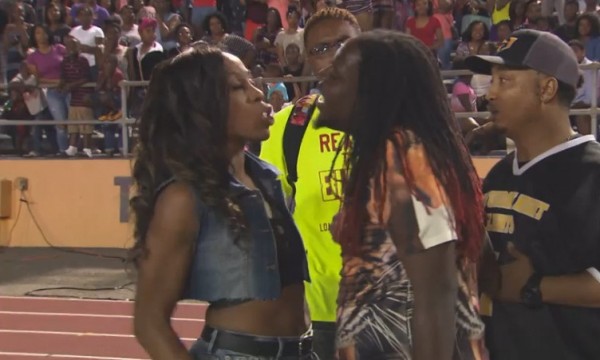 Miss Dianna really brought the drama this week on Bring It, the Dancing Dolls face their biggest challenge yet- dancing on a football field at the Saturday Night Lights Competition. And the excitement is not just due to a change in venue, but because of the catfight that almost erupt between Miss D and McCoy, the captain of their rival team Lowndes County Dance Company (LCDC).

Miss D really ups the ante this time around by bringing a marching band to back up the girls. According to Dianna, DD has to give them something new because LCDC are very rowdy and talk a lot. All of this and more makes it a different kind of competition all together for the girls and for Miss D.

Tina gets advice from the moms on how to deal with Kayla coming home after curfew the night before.  Of course Mimi feels she has the answers and tells her to let it go but make sure she understands that it will not happen again.

Later, Tina brings up how she feels about Kayla leaving for college or doing whatever she wants and Mashumba tells her that she pushes her daughter, Jalean, in the direction that she feels will help give her direction. Tina really doesn’t want to hear what she had to say because she doesn’t like her in her business. Nonetheless, she has a talk with Kayla about college and about her coming home on time, telling her that until she has a plan for what she is going to do, she needs to still follow her rules.

At one of the practices for the competition, the clearly girls grow weary from the hours of nonstop practice. Carmyn and Makalah who are up for the captain spot this week, really feel the heat as Dianna feels that they of all people should not show their tiredness.

As they continue to practice, the weather is not on their side. A thunderstorm inhibits them from finishing practice on the field, which is a huge issue since the girls are already having trouble learning the routine.

The day of competition comes and the heat (literally) is on. Camryn wins the captain spot and is ready to kick it up. Before the girls gs on, Dianna and McCoy have a run in and oh boy, they do not hold back. Miss D goes back to tell DD that they have to really bring it since LCDC think they have the competition in the bag.

At the competition, while waiting for their girls to come out, Mashumba feels the need to “clear the air” about the conversation in which she told Tina to make Kayla go to college. Tina hears her but feels that the air was already cleared. Nonetheless, she remains calm and cordial.

On the dance floor in the first dance category LCDC’s secret weapon is a male twirler, who definitely brings a fire for the team. Then it is time for DD and it is clear that McCoy feels a certain kind of way about the marching band. In particular, he points out how long it takes them to get on the field being that the time limit is seven minutes. He and the twirl leader are heard talking mess about their routine lacking originality. Such haters.

Dianna feels the girls did an awesome job and they did. The marking band behind them really took their routine to the next level.

It is now time for stand battle and DD goes up against LCDC. This is the first time the teams go against each other ever and you know that it is all on the floor for both. Then something happens, Diana counts LCDC counts and they are over what’s allowed making their stance longer than the rules allow. So Dianna goes to the MC and tells him that there were too many counts. Of course McCoy and Dianna get into it and are in each other faces. He puts his hands al in her face, which sets Dianna off. She starts taking off her shoes as to fight McCoy but they are pulled off of each other into their own corners and the stand battle continues.

So, after their squabble, the judges decide that it is a tie which will be broken by a captain to captain battle. Camryn actually kills it in a way that I have never seen. She hits every single move so hard, even the LCDC’s captain has to applaud.

In the end, DD wins second place in the field show and to Dianna’s dislike, LCDC wins first place. I don’t agree. They were good but DD did tear it up. For the stand battle, DD wins first place. Camryn came all the way through for her team.

In the locker room, Dianna tells the girls that after talking to the judges, they were docked points for going over the time by 30 seconds (their intro was too long), which I am sure makes her feel better about losing.

They are on to the next one, which brings them closer to the much awaited for Summer Slam.