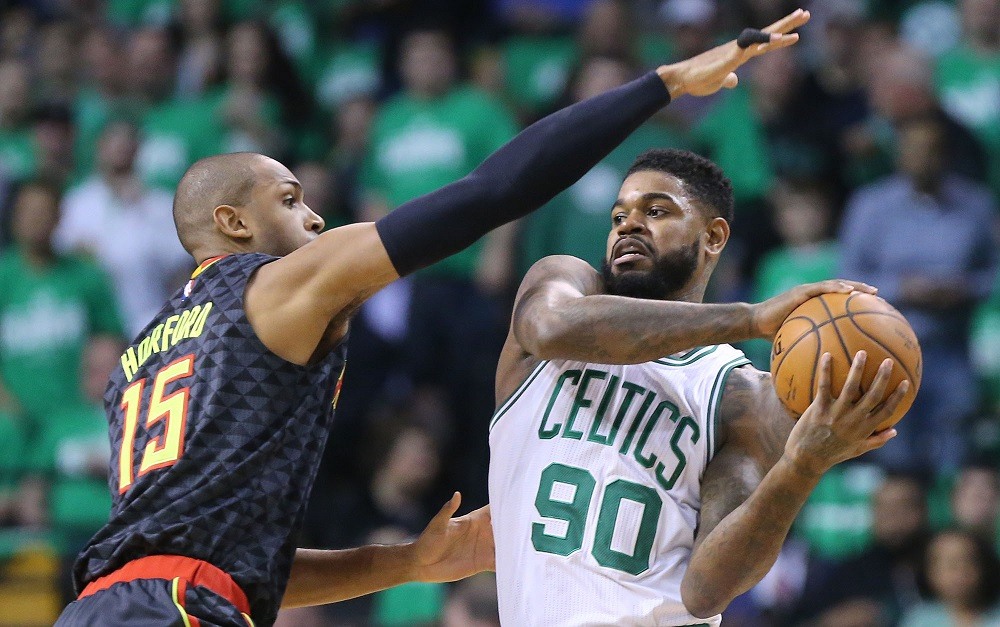 The #5 seeded Boston Celtics defeated the #4 seeded Atlanta Hawks in overtime behind Isaiah Thomas‘ 28 points. Atlanta’s Paul Millsap scored 45 points and grabbed 13 rebounds, but it was not enough, as the Hawks fell to 2-2 in the series.

Isaiah Thomas‘ preschool sons, James and Jaiden, did their best to sit quietly during his postgame news conference on Sunday before the elder tyke leaned over the microphone and said, “my daddy … is the best basketball player.”

Well, he’s the biggest reason the Boston Celtics have tied their playoff series with the Atlanta Hawks at two games apiece, at least.

One game after scoring a career-high 42 points — and one day after escaping suspension for taking a swipe at Atlanta’s Dennis Schroder — Thomas scored 28, including the last five of overtime to lead Boston to a 104-95 victory in Game 4 of the best-of-seven series.

Game 5 is Tuesday night in Atlanta.

Paul Millsap scored 45 for the Hawks — a career playoff high and one off his all-time best — and added 13 rebounds. The Hawks were 0-5 in overtime in the regular season and have not won an overtime game in more than two years.

Data curated by PointAfter
Marcus Smart scored 20, including 11 straight points for Boston in the fourth quarter. He also held Millsap to just two baskets in the final nine minutes of regulation and none in overtime.

“You’re throwing darts a little bit with a guy that’s rolling like that,” Celtics coach Brad Stevens said. “He was scoring in so many different ways.”

Thomas also guarded Jeff Teague on the final play of regulation, preventing him from getting a shot off, and blocked Millsap with 63 seconds left in overtime and the Hawks trailing by only four points. Thomas followed it up with a corner 3-pointer and then a pair of free throws to clinch it.

“Isaiah did a heck of a job, the way they were guarding him, still being able to penetrate and find guys,” Smart said. “I was one of the guys on the end of that. When I was that wide open and Isaiah doing all that work, I had to make the shot.”

Thomas had six assists and Jonas Jerebko had 16 points and 10 rebounds for the Celtics, who lost the opening two games in Atlanta and then won the two in Boston.

“They responded to being down 2-0,” Hawks coach Mike Budenholzer said. “Now we’ve got to go home and respond.”

The Hawks led by 16 midway through the third and still led by 11 before Boston scored the last eight points of the quarter.

“I think we took our foot off the pedal. I think we maybe pressed a little bit, tried to take them off their game,” Millsap said. “Give them credit: We had the opportunity to blow the game out. We just didn’t do it.”

The Celtics led by four with under a minute to play in regulation when Teague hit back-to-back 3-pointers to give Atlanta the lead. But Thomas drove for a layup to tie it 92-all with 15 seconds left.

The Hawks had a chance to win in regulation before Teague dribbled out the clock and Thomas prevented him from getting off a clean shot.

Boston’s Amir Johnson scored the first five points of overtime. Teague kept Atlanta in it with a fourth-chance 3-pointer with 3:44 left but the Hawks did not score again.

It was still 97-95 with 94 seconds left when Evan Turner, who finished with 17 points, made a jumper. Thomas got open in the right corner and made a 3-pointer to give Boston a seven-point lead.

Teague, who started the game 1 for 10 from the floor, had only 13 points, but he made a 3 with 50 seconds left to make it a one-point game and another with 21 seconds to play to give the Hawks the lead.

Thomas spent a night worrying whether he would be suspended for taking a swing at Schroder in the first quarter of Game 3; he got the word Saturday afternoon that he would be able to play.

For having the temerity to put his face in the path of Thomas’ open hand, Schroder was booed when he entered the game, then greeted with a profane cheer that mispronounced his name. He was given a technical foul with 0.6 seconds left in the first half when he shoved Jae Crowder off him.

In all, the Hawks scored 13 of the last 18 points in the first half and then the first 14 in the second, turning a six-point deficit into a 16-point lead.

Jerebko had a pair of 3-pointers in the last 90 seconds of the third quarter and the first two baskets of the fourth to help Boston turn an 11-point deficit into a 74-73 lead.

Hawks: Millsap had 26 points in the first half and surpassed his previous playoff high of 29 before the first timeout in the third quarter.

Celtics: Some of the biggest cheers were for the Patriots sitting courtside: Owner Bob Kraft, coach Bill Belichick, tight end Rob Gronkowski and running back LeGarrette Blount. … Kelly Olynyk returned to the court after missing the previous two games with a shoulder injury. He played four minutes and had zero points and two rebounds.