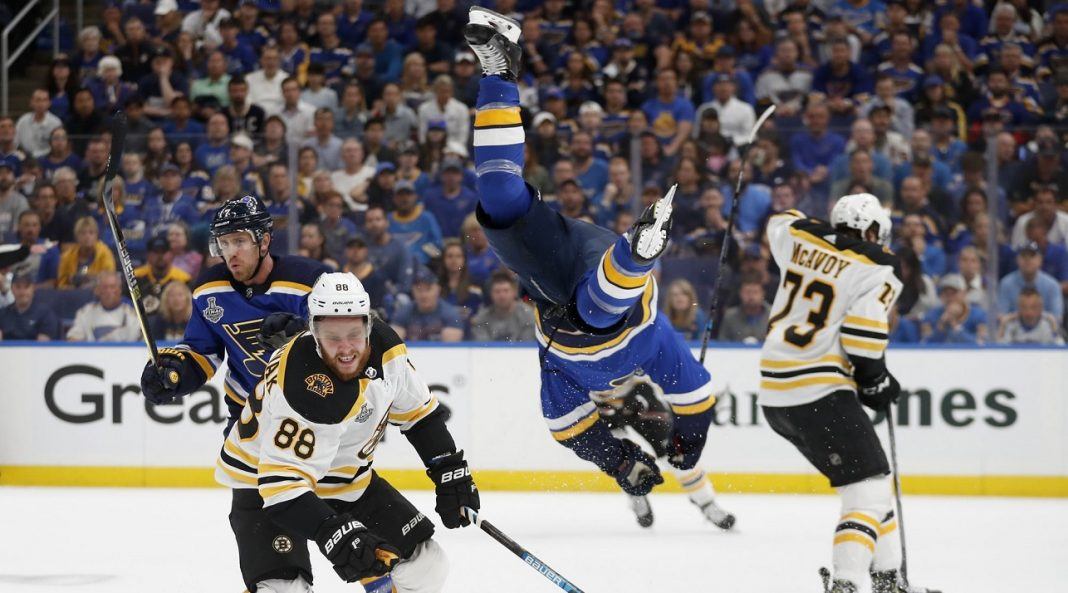 No even-strength points through the first two games of the Stanley Cup Final for the first line put plenty of pressure on Boston’s best players to produce. Pastrnak shrugged it off, saying on scale of 1 to 10 they felt the pressure level was something around a 2.

Then they got on the ice and delivered.

The stars led Boston to a 7-2 rout of the St. Louis Blues on Saturday night to take a 2-1 lead in the best-of-seven series. Defenseman Torey Krug scored a goal and had three assists, top-line center Patrice Bergeron had a goal and two assists, Pastrnak and Brad Marchand got on the scoresheet and the top power-play unit was a perfect 4 for 4 — on four shots.

“It’s about time we get going,” said Pastrnak, who scored his first goal in the final. “I still think we haven’t played our best. But we are up 2-1 and we need to meet tomorrow, look at the video and get even better. That’s our focus in this group, and we’ve got a lot of good players, so we know we can even elevate more.”

Boston chased Blues goaltender Jordan Binnington, silenced actor and Blues super fan Jon Hamm and a raucous crowd that was fired up for the first Cup Final game in St. Louis in 49 years. The Bruins survived an initial onslaught and then simply took it to the home team.

“We’ve been through so much together this year that we just rely on one another in uncomfortable situations,” said Marchand, who assisted on Krug’s goal. “When we get through it, we get through it together.”

Nothing was more important to get the Bruins through this than Marchand, Bergeron and Pastrnak getting on track. The line combined for five points in a decidedly better effort at 5-on-5 and on the power play.

“We spent less time in our zone,” Bergeron said moments after the win. “When we do that we have more energy on offense.”

Tuukka Rask was solid as usual in goal with 27 saves, and the Bruins continued to get contributions all over their lineup. Trade deadline pickup Charlie Coyle continued his hot run with his eighth goal of the playoffs, fourth-liner Sean Kuraly scored his second in three games and Marcus Johansson added goal No. 7 in the final minutes.

The Bruins are two victories away from their first Stanley Cup since 2011 and Boston’s third in a row in the four major North American professional sports.

The Blues came out flat and continued a troubling trend of parading to the penalty box. After being the least-penalized team through the first three rounds, the Blues took seven more minors Saturday to give them 17 in the final.

“We do have to limit the penalties for sure,” Blues coach Craig Berube said. “We know they have a dangerous power play and we’ve been flirting with danger here the whole series and it burnt us tonight.”

Staying disciplined was Berube’s focus given the charged atmosphere that delivered on all the hype. His players didn’t practice what he preached, and Berube’s staff even got a penalty for unsuccessfully challenging Kuraly’s goal for offside with 7.8 seconds left in the first period. Berube believed it was a 50/50 call and took a chance that cost his team when Pastrnak scored on the ensuing power play.

Just about everything went wrong for the Blues, who were forced to put backup Jake Allen into the game. He gave up one goal on four shots.

Binnington allowed five goals on 19 shots before getting the hook for the first time in his young NHL career but will be back in net for Game 4.

“I’ve got to be better,” Binnington said. “I got to do a better job giving my team a chance to win. They scored three goals in the first. That’s never good. They’re a good hockey team. We have to get back to our game.”

One silver lining for the Blues is they scored their first power-play goal of the series and ended Boston’s streak of 19 consecutive penalties killed. St. Louis couldn’t kill off a single Bruins power play, which paved the way for the first blowout of the series.

Sundqvist returns to the lineup for Game 4 on Monday night to give the Blues back an important grinder.