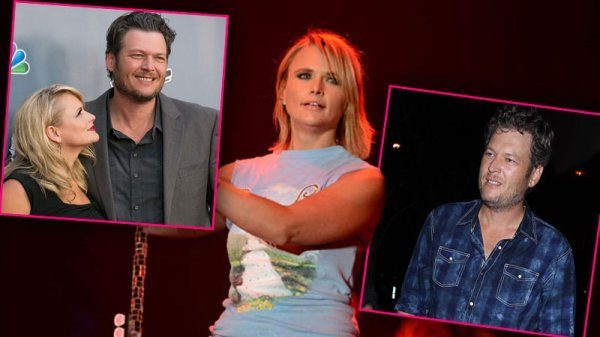 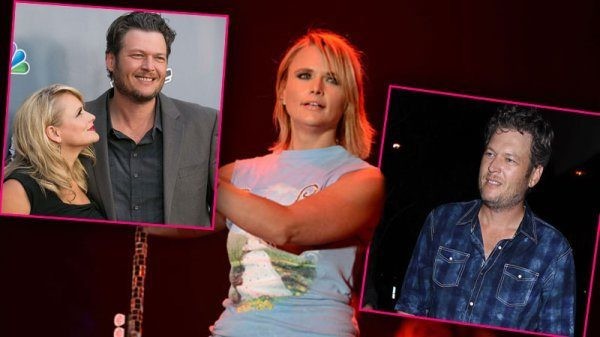 Black Shelton and Miranda Lambert engaged in their first public interaction over Twitter just four days after they announced their divorce.

Oddly, the couple tweeted each other to help out fellow country singer Ashley Monroe publicize her third album, The Blade, which was just released.

In which, Miranda replied three minutes later to her ex:

“@blakeshelton no I can’t because it is the best work she has ever done! I love it! We love you @ashleymonroe”

@blakeshelton no I can't because it is the best work she has ever done! I love it! We love you @ashleymonroe http://t.co/YEvRPYhzN5

The Twitter interaction confused and shocked many, especially country fans who were already taken back by the couple’s split.

One fan tweeted at Blake speculating that the tweets were scheduled in advance, as some sort of marketing ploy. However, Blake quickly shot down this speculation, replying:

However, the former couple didn’t stop there and seemingly played up the shock of their twitter interaction.

Miranda posted a screenshot of a paparazzi video that shows Blake, with a friend, pushing a baby stroller as he put it in an SUV, adding:

“@blakeshelton I knew it… You WERE pregnant! This calls for a drink!”

@blakeshelton I knew it…. You WERE pregnant! This calls for a drink! pic.twitter.com/HXeaw2FyOK

Not surprisingly, some fans expressed upset over the two poking fun at the whole situation. One fan even tweeted at Blake saying, “Losing respect because of this whole charade,” which provoked Blake to reply, “Well rest assured not one s—t is given…”

Although many media outlets have been reporting that the split between the two country stars was messy and there was even cheating involved, Blake and Miranda are sure painting their divorce to be a lot more amicable than what was initially speculated. 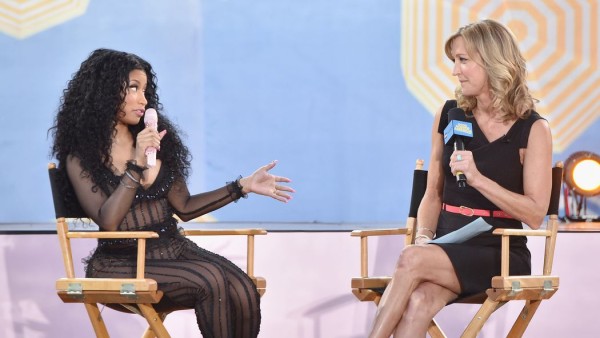 Nicki Minaj visited Good Morning America on Friday to perform and inevitably sit down with host Lara Spencer to talk about her recent twitter feud with Taylor Swift.

Although Taylor has apologized to Nicki and the whole feud is supposed to be finished, it didn’t stop Lara from asking Minaj about the whole social-media ordeal.

Minaj explained, “I spoke to Taylor Swift yesterday on the phone. She was super, super sweet and she apologized. She said, ‘Look, you know I didn’t understand the big picture of what you were saying, but now I get it, so we’re all good.’”

“I posted something on my Instagram and it showed the stats of other videos that had been nominated previously, and it just seemed to be a little funny business going on…’Anaconda’ had such a huge cultural impact, and on top of that, we broke the Vevo record. This is actually my third time breaking the Vevo record and ‘Anaconda’ therefore should have been nominated, and I do think if it were the pop girls, they would have had many nominations for it. I think I got two for ‘Anaconda,’ for Female and for Hip-Hop, and it should have been for [Video of the Year]. That’s all we were saying, and it is what it is.”

However, even if media can’t help but continue talking about the short-lived feud, it seems that in Nicki and Taylor’s eyes, the dust has settled. When asked if she would ever collaborate with Taylor, Nicki said:

“I’m sure we can. You know why? Because it takes a big person to do what Taylor did and everyone sometimes speaks out of turn, you know? I’ve been there. Sometimes we do things and we don’t think right away or we don’t investigate then we just talk, so it was big of her to come out and say that. So yes, we spoke for a long time. We were cracking up laughing on the phone. It’s over, you guys! And I love you guys for supporting me. Thank you so much. I would love to. Of course I would love to work with her.”

I am sure if it were up to Katy Perry, the feud would be dragged out for a lot longer, so she could get a few more digs at Taylor (whose nominated song and video “Bad Blood” is reportedly about her feud with Katy). Unfortunately, this is not the case and the feud ended as quickly as it began.