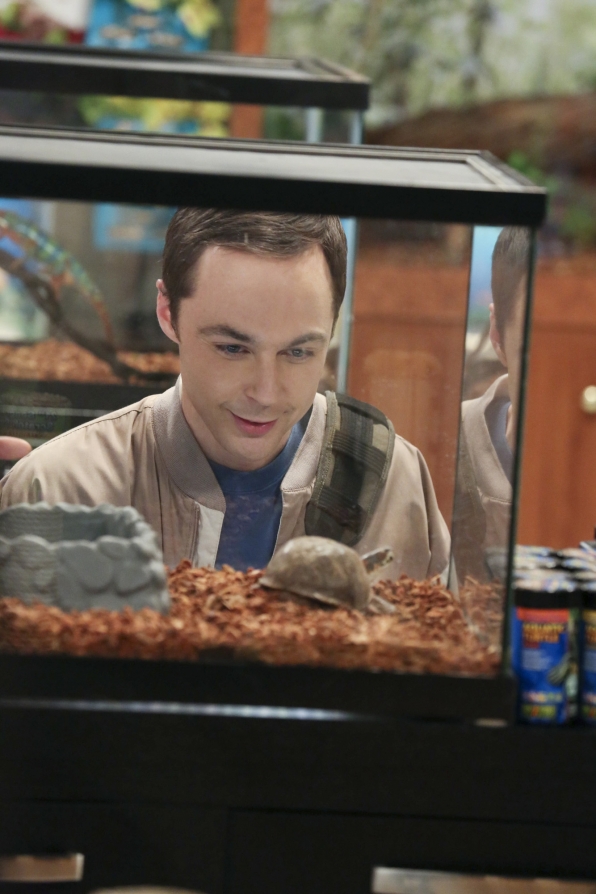 On this week’s Big Bang Theory Leonard talked about how focused he was during a recent game of mini golf and compared it to the rush professional athletes get every time they play a game. Penny told Leonard he was being too proud after Leonard said that the fact that he did so well in the mini golf game should turn Penny on. When Penny and Leonard walked into Leonard and Sheldon’s apartment he and Amy happily announced that they were going to get a pet turtle together. Amy said that by doing so she and Sheldon were taking a big step in their relationship. Sheldon then said that a turtle was the perfect pet because it doesn’t shed or make noise. He then joked that those were the same reasons he originally chose Leonard to be his roommate. 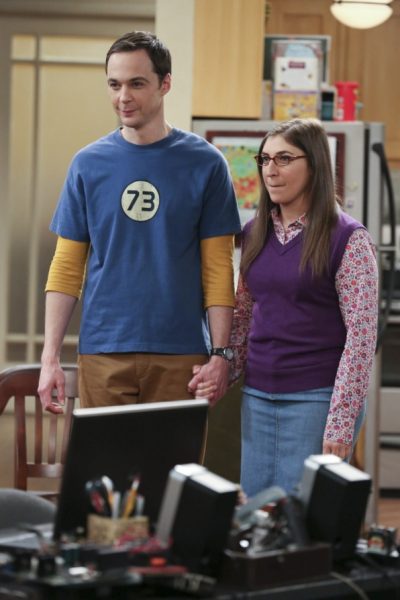 In the next scene Raj and Emily were at her apartment when she got a message on her phone that she had to head to the hospital to check on one of her patients. She told Raj he could stay there while she went to work. 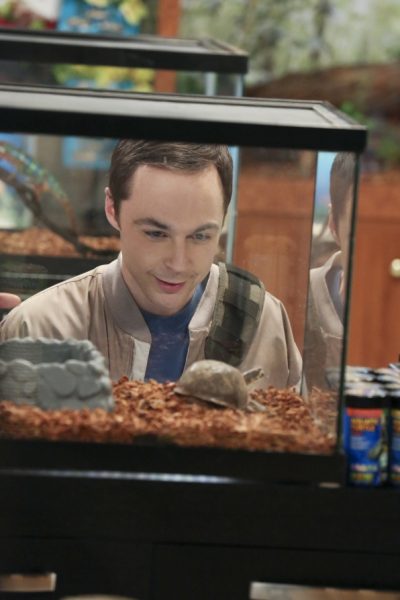 As Amy and Sheldon arrived at the pet shop to choose their turtle Sheldon was extremely agitated because they had seen several puppies at the shop begging to be taken home. They found a turtle that they liked and Sheldon told the turtle he would be living with him because Sheldon and Amy didn’t live together. Amy then told the turtle that this was because their relationship was moving ridiculously slow. She then told the turtle would be living with her when Sheldon had to travel for work and when he is away at Comic Con. Sheldon then said the turtle would have to live with Amy if his application was accepted to go live on Mars. This upset Amy because she had no idea that Sheldon had wanted to live on Mars rather than on Earth with her. Sheldon asked Amy if she would approve of him doing this and she said no. 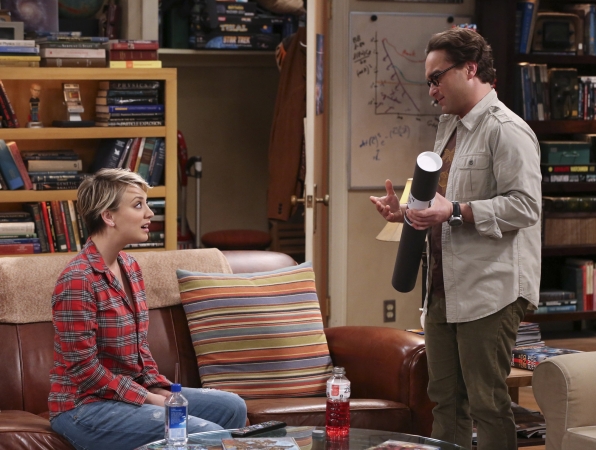 Back at the apartment Leonard told Penny that he had bought her a Valentine’s Day present that he had been afraid to give her. When she asked him why he was afraid to he said it was because he got her gift at an adult toy store. He then showed her what he bought; a large canvas that they could decorate by using body paint on themselves and then laying on the bed. 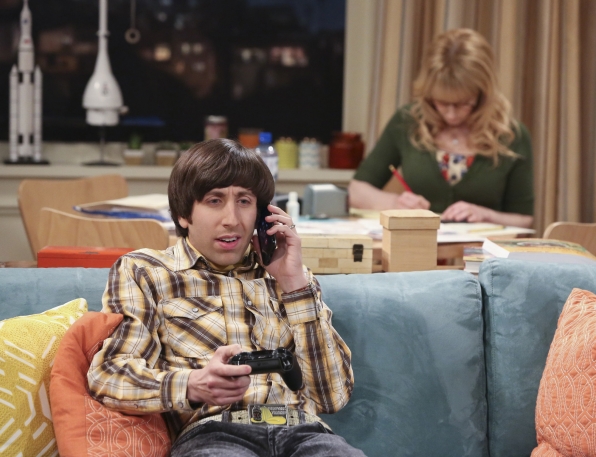 At Bernadette and Howard’s apartment Bernadette was doing the couple’s taxes and remarked that Howard had a lot of receipts from the Lego store. He then told her they were business expenses and she could write them off. Howard then got a phone call from Raj while he was in Emily’s apartment alone. He told Howard he was playing video games will Bernadette did their taxes. Raj then exclaimed that he couldn’t get Emily’s drawer in her nightstand closed again. When Howard asked him why he had it open Raj admitted he was snooping. Howard told Raj to pull the drawer out to see if there was something behind it but when Raj did that he accidently broke the front of the drawer.

In the bedroom Penny and Leonard admired their handy work courtesy of the body paint he bought. However, the body prints on their bed weren’t what the couple had expected to see. Penny then said that they could do better than they had because it looked like they had hardly moved when they were in bed together.

As Amy and Sheldon arrived back at Sheldon’s apartment without having acquired their pet turtle, they were arguing about his desire to go live on Mars. When Amy said Sheldon should have told her what he was doing he confirmed that all their friends had said the same thing. He then played the Star Trek theme on his nose to try and cheer Amy up. When that didn’t work Sheldon could tell how mad Amy was.

Sheldon made Amy a cup of tea to try and soften the blow of his desire to move to Mars. When Amy asked Sheldon why he wanted to he said that for the application he had to film a video of himself stating the reason, which he then had Amy watch.

As Leonard and Penny tried their body paint again Leonard sounded like he was talking dirty to Penny only for viewers to find out that Penny was simply trying to get paint out of his eyes.

When Emily arrived back at her apartment Raj was still attempting to fix her drawer. She asked Raj what he had been doing in her bedroom and he came clean and told her the truth about what happened. Since Raj still had his phone on video Bernadette and Howard were able to hear everything the couple was saying to each other.

Back in their bedroom, Penny and Leonard were finally happy with the results of using their body paint. They had covered a sheet in paint from their bodies and Leonard said they should hang it up somewhere. Penny then said that they should give the sheet to Sheldon and tell him William Shatner painted, which turned Leonard on. 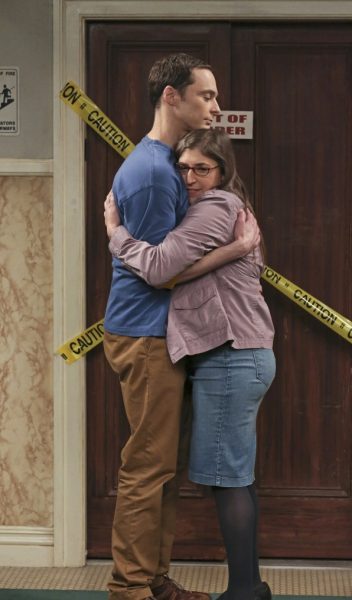 After the couple talked about Sheldon’s desire to move to Mars Amy said she was going home. Sheldon remarked that he couldn’t understand why she was upset. Amy then said that when they were going to get a turtle together she thought that meant something. As Amy left the apartment Sheldon went after her. He then asked Amy if she would consider going to Mars with him. The two then hugged and went to file an application for Amy. 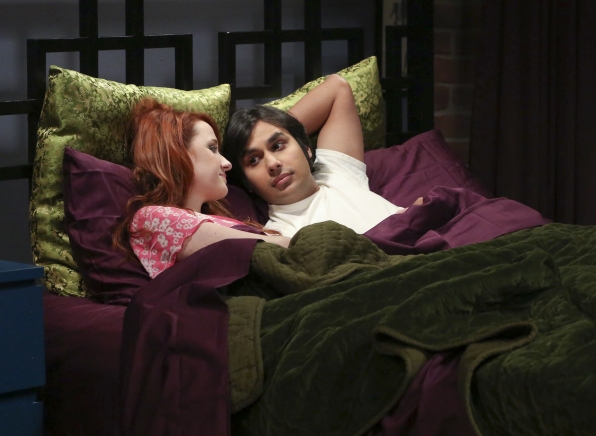 The episode ended with Emily forgiving Raj’s snooping, but getting in a small fear asking him if he looked in her closet. We know what that does to someone trying to go to sleep!