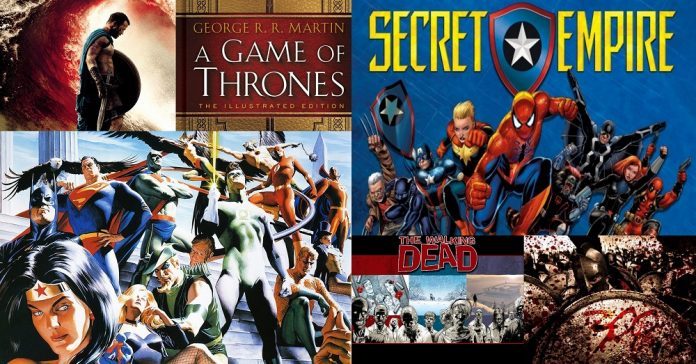 There once was a time when comic books were something of a joke and only for kids. Even the people who read them would be given a hard time by friends and family.Even though they were stories that would be praised in classic literary novels, including themes such as heroism, humanity and overcoming insurmountable obstacles; the medium was derided by critics. DC Comics were creating some amazing worlds with stories that went deep and allowed many outsiders a great escape to not feel so alone. So, what changed? Basically, those kids that read and lived through those same comics grew up and created ones that went deeper and farther than Archie, Beetle Bailey and The Family Circus ever dreamed of. These kids even created a new form which they called graphic novels.That term graphic novel even sounds more legitimate than ‘comics,’ and thus, a whole new genre was born off of the old one. The new genre became more respectable, and now, new television series and movie franchises have been built from them. So, for all you avid readers and even beginners, here are the best graphic novels out there that you need to check out. Some of you may be surprised that your favorite TV shows or movies came from a graphic novel, but that’s even more reason to read them now. How often have you enjoyed a book more after seeing the movie? Well, the same can be said for graphic novels as they are often much more in-depth than the TV shows and movies. So, for all you avid readers and even beginners, here’s the best graphic novels out there that you need to check out. You’ve heard the name of the AMC show and have probably watched it once or twice, but have you read the ongoing series of graphic novels? By now, you may have even forgotten how Rick Grimes and his Ricktocracy began. The Walking Dead begins with Sheriff Rick Grimes waking up from a coma in a hospital that is overrun by the undead. What a great way to start a story, isn’t it? His search for his wife and son are compelling, and we follow his journey to find a group of people who aren’t trying to take a bite out of him. If the latest season of “The Walking Dead” frustrated you, go back and read this series again to remind you what made you fall in love with it. It’s like a relationship. If it’s going to last, we have to get through the rough patches together, and it’ll get better again. Yup, another book that spawned a television phenomenon. “A Game Of Thrones” is how it all began with Lord Eddard Stark feeling cursed the moment King Robert bestows the office of the Hand. His family is divided, and he is surrounded by treachery.Easily, one of the best series of books in the fantasy literature genre, George R.R. Martin is one of the few authors that can come close to J.R.R. Tolkien’s wonderful world of “The Hobbit.” A Game Of Thrones is told from eight characters’ perspectives with each chapter. This creates interesting cliffhangers, but once you dive into the next chapter, you’re off on that character’s adventure. The only thing you can’t avoid is that if you watch the show first, you’ll know the shocking deaths already, and the same if you read the books. I would suggest reading this great series and then watching the HBO show just to see how they were able to bring it life. The visuals are awe-inspiring.

“Secret Empire” was one of Marvel’s most anticipated graphic novels for 2017 with good reason. In this one, the Marvel Universe is under attack from within as Captain America chooses Hydra over the Super Hero community.This is one series that is not lacking in scope. Captain America has chosen to follow the ideals of Hydra, and he has set a plan in motion that will have the farthest reaching effects of any other graphic novel in Marvel history. His actions will pull together the Avengers, the Guardians of the Galaxy, the Champions, the Defenders, and the X-Men just to give you an idea of how much action and intrigue is involved. The biggest shocker is how can the Marvel Universe survive after being betrayed by the most trusted superhero among them? I’m not telling.

For anyone who still questions the validity of graphic novels as an art form needs to read Frank Miller’s 300. The over-the-top movie was based on this book (plus it’s loosely based on the battle of Thermopylae which was the beginning of the Persian invasion of Greece in 480 B.C.), and the artwork is just visually stunning.So you’re getting some history for the kids and plenty of action for the adults.

This is the man who gave us Sin City, but 300 is as far removed from that world as possible. In just 88 pages, we are whisked into the world of King Leonidas, foot soldier Stelios and Dilios along with their small army of 300. You won’t be able to put this one down, and you’ll find yourself returning to it again and again.