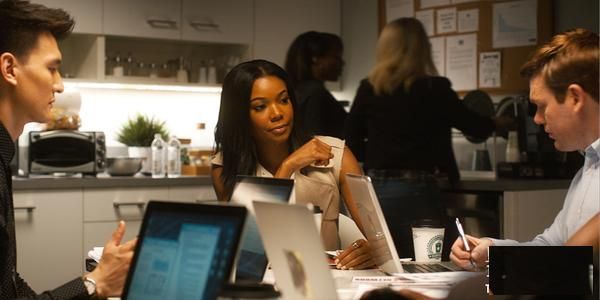 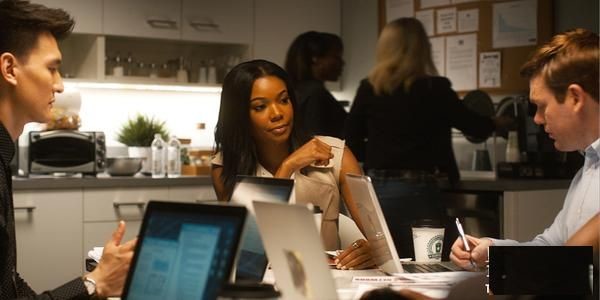 It’s the season finale of Being Mary Jane, and needless to say, it’s heavy.

Right as she and Eddie wake up from a night together, Mary Jane gets a visit from David’s mom. And while she tries to make small talk, MJ breaks down and tells her “I can’t do it.” Simone then comes clean. “David loves you, he knows he messed up, but David still loves you. He’s beyond sorry.” She begs her to forgive her son. “Would you forgive your son if you were me,” MJ asks her. Simone remains silent, giving Mary Jane her answer. MJ rips into her, and she can’t say anything.

MJ gives her talk at CeCe’s bookstore despite the fact that she propositioned her in the last episode for compensation for the help in getting her “two shows.” In fact, she shares with her a monetary opportunity to write a book about their story that can benefit both of them. CeCe overwhelmingly agrees.

She and Eddie continue to have a good time together. They do karaoke at a bar, and while she has fun singing Rapper’s Delight, she doesn’t like the looks other black couples give them.

What she finds out the next day, though, is that the people at the bar are not the only ones talking. Pictures and videos have gone viral, and Greg wants the first episode of Talk Back to be about interracial relationships. Her team is not feeling it, but she sets them straight because they have a chance to say what they want about the topic, and that’s how they should look at it.

Paul is still hung up on Patrick not being there for Niecy and commends PJ for stepping up for her. It’s important for her to see a man be there and while PJ hears his dad, he does stand up for his brother letting his dad know that Patrick does show up for Niecy.

Back at the office, Kara is in hot water as Marisol turned her in for accusing her of having an affair with Greg. He is not having it and yells at her that she has to fix it or risk the possibility of losing her job. Kara can’t deny it either because she did, in fact, say it and the younger Latina is sticking her for intimidation and defamation of her name.

Later that night, MJ tells Kara that she should break down and talk to Marisol, but she’s not feeling it because according to her, she broke the code. In Kara’s view, she should have come to her “as a grown ass woman.” MJ then asks her what happened, and Kara tells her what she said and that she regrets it. Her friends her “tell her that, apologize and see if the whole thing goes away.”

And that’s what she does. It’s hard for Kara to speak to Marisol when she sees her in the break room and what she does say to her is it’s pretty fake. The thing is she really doesn’t come out and say “hey this is what I meant,” but instead says, “Girl, I really need this to go away.” Marisol looks at her and says,  “Offer me the anchor spot on your new show,” and Kara is speechless.

MJ reluctantly does the interracial dating piece for the first episode of Talk Back, and while we see her monologue on air, we see her relationship with Eddie fall apart. She keeps it very real wit him. “I love black men; I want black love.” He can’t contend with that.

Later in the episode, while MJ and Kara are out getting BBQ, Mary Jane sees David with his new baby and new women. Their eyes meet, but they don’t say anything to each other. Kara says what happened and tells her that it’s amazing the way in which she handles things. As they eat, MJ shares with her friend how CeCe ended up being a blessing that propelled her into something greater and maybe Marisol is that for her. So Kara takes in what she says and gives the girl the anchor position.

But that apparently doesn’t mean anything because even though Marisol got what she wanted, she still goes through with the HR suit and Kara did not see it coming. An investigation is opened, and Kara must have no contact with Marisol, which is hard since she is the talent on her primetime show.

While Kara deals with that MJ and CeCe, have their book meeting with publishers. As they interview the two, CeCe takes over and tells the story. MJ really doesn’t say anything, and the publisher is beyond fascinated by the story and actually calls it absurd. But then what happens? It was a set up with the cops. At the end of her telling her story, they arrest Cece for blackmail. Wow.

In the end, after Niecy is pulled over by a cop, she calls the cop on his bullshit. He doesn’t like it, and he pulls her out of the car and Tasers her, in front of her children. Later that night, MJ’s team sees the video, which has gone viral, shows it to her and she stands there looking at it in shock.

What to do MJ, what to do? We have to wait until next season to find out.