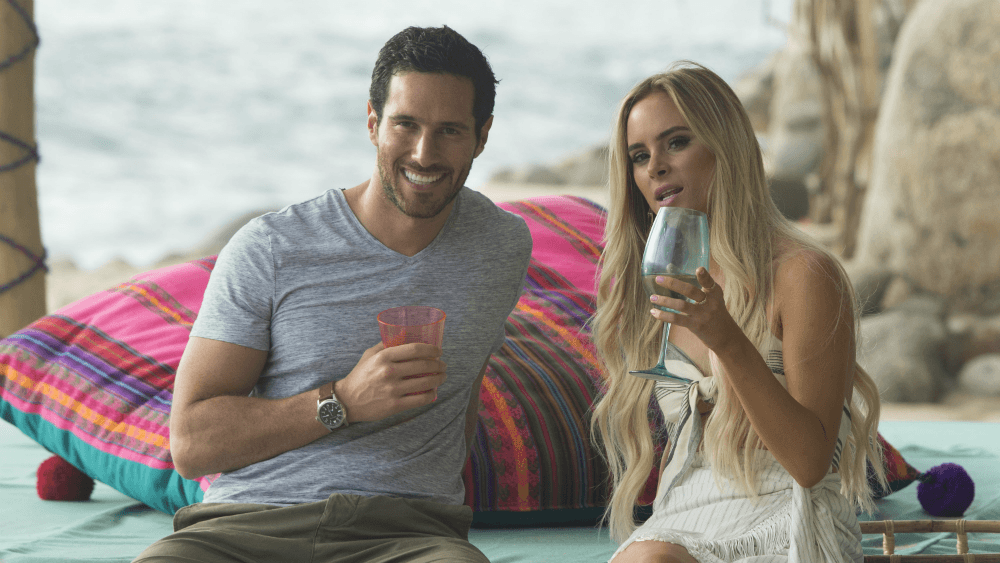 Bachelor in Paradise season 4 returned for the second part of its premiere episode. On Tuesday, ABC continued to shine the spotlight on the incident that went on between DeMario and Corrine that subsequently (and now infamously) shut down BIP production [temporarily]. In addition, the network gave Bachelor nation an extra treat, as it showcased the wedding of Bachelor alumni Carly Waddell and Evan Bass (who met in Paradise last season).

The episode began on an uplifting note, showing host Chris Harrison officiating Carly and Evan’s destination wedding. There were various familiar faces [from within the Bachelor family] at the ceremony, including Jade and Tanner, Nick and Vanessa, Kaitlyn, Emily and Haley and Ashley I. Of course, the show ensured to put an emphasis on all of the relationship successes that have come from the previous seasons (which, let’s be real, are very minimal at this point). During the ceremony, Chris told the crowd, “Even though our production was…technically shut down, we didn’t want anyone to miss this joyous occasion.”

Following the wedding, things got serious again, as the cast (minus DeMario and Corrine) was huddled together to discuss the shutdown of production. It becomes clear that this sit down took place after ABC decided to ramp up the show again, as Chris tip-toes his way through explaining what happened without actually explaining anything (surprise, surprise). Chris told the cast that they had to shut everything down due to a particular incident that occurred between DeMario and Corrine in the pool. The show’s host then went on to add that an independent investigation was completed in which “there was no evidence of misconduct by the cast on the set.” The group then went on to ask and answer a series of questions about how the media portrayed the situation, about the people directly involved in what went down and other damage control-related topics. In referencing the particular night of the incident, Chris somewhat hinted at the seriousness of it, noting, “a lot of tears were shed that night…it was really rough. It was brutal.”

Many of the cast members jumped to the defense of both Corrine and DeMario, as they all were relieved that no further legal actions were taken against either of the former cast mates. At one point, Raven gushed, “we knew what happened, but it was so unfair what people [and the media] were saying about DeMario…he and Corrine both.” Raven went on to recount that that some of the cast mates were getting criticized for sticking up for DeMario. She explained, “People automatically assumed we [her and Jasmine Goode] were slut shaming Corrine, and that was not the case at all. Our worry was for DeMario’s name and the longevity of the allegations that were being tossed around about him. That’s what we were concerned about. We felt for her. It was never calling her any names or judging her for anything she did, because we didn’t think she did anything wrong and neither did DeMario.”

Later on during the intense sit-down, the cast talked about how both Corrine and DeMario handle the scandal, particularly when it was at its peak moment in the tabloids and media. They talked about Corrine’s official statement, in which she called herself a “victim.”  Most of the cast members believed that she was speaking with the help of a lawyer and it wasn’t necessarily her wording. Danielle chimed in, “Maybe she wanted to try and save face, was kind of what I took from [her official statement].” This part of the serious discussion prompted Raven to share, “I was in a very abusive relationship [previously], and there was a point where I was sexually assaulted, so I guess that’s why I took this kind of really personally So I hope this situation doesn’t deter actual victims from coming forward and really speaking their truth and getting help and asking for help. I hope this doesn’t deter anybody.” Here, Raven semi-referenced to the fact that Corrine did not get waves of support after releasing her “victim” statement, especially as many of the people within the show’s production did not feel it was fair for DeMario to take all the heat for the incident.

Eventually, the cast talked about consent, which was a big topic that came out of this whole scandal. Cast member Taylor noted, “Verbal consent is the best way to give consent, with Ben Z then adding, “consent throughout is important.”

While the majority of the second part of the premiere episode was taken up by Carly/Evan wedding and the serious sit-down conversation that almost felt like a freshman year orientation, the cast did share some details about their contact with each other. Dean revealed that he spent some of the time (during production shutdown) in Kentucky with Kristina. 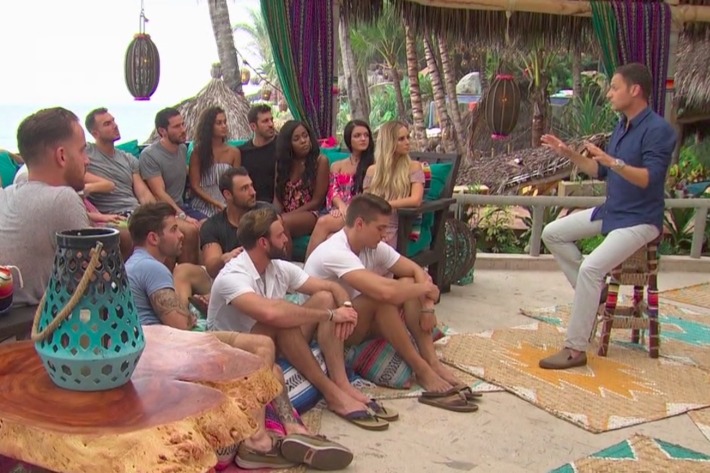 As the show resumed its normal beachy fun vibes, the relationships began to blossom again. The most notable being the one that began to spark on Tuesday’s episode between Taylor and Derek, who went on a daylong date together. Meanwhile, Alex was seen trying to persuade Amanda to give him a shot, which didn’t work out so well (as of yet) – in fact, even Raven advises him to seek other options.

Unfortunately, in conflict with my prediction after Monday’s episode, Dean and Kristina ended the second episode on much more rocky ground, which makes me wonder about the future of their short-lived fling (even though he went all the way to Kentucky to be with her after getting to know her for two just short days on the BIP set prior to shutdown).

You can catch more Bachelor in Paradise when it returns next Monday, August 21 on ABC.