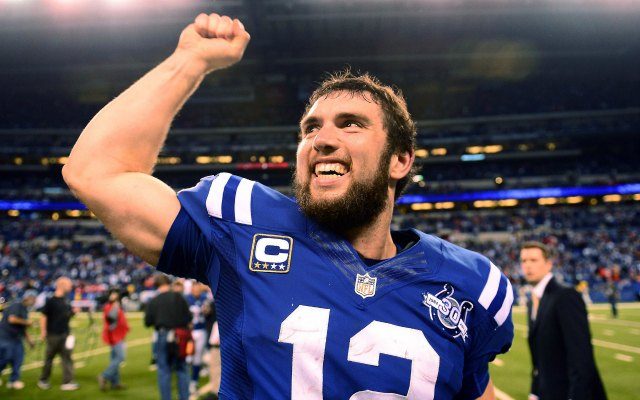 Andrew Luck may have missed several games last season, but the three-time Pro Bowler is back and raring for some Indianapolis Colts action.

The three-time Pro Bowler, who missed nine games last season with an assortment of injuries, returned to a very different locker room Monday for the start of the Indianapolis Colts‘ offseason workout program. He proclaimed himself ready to play.

The team’s biggest offseason priority is making sure Luck is fully recovered from a lacerated kidney and partially torn abdominal muscle that kept him out of the final seven games last season, a right shoulder injury that forced him to miss the first two games of his career and an ankle injury.

The injuries led to the worst season of Luck’s pro career — just 15 touchdown passes and 12 interceptions. The Colts wound up 8-8 and missed the playoffs for the first time in the Luck era after opening the season as a trendy Super Bowl pick.

Luck said Monday his kidney was fine, and his shoulder feels “very good.”

“He was cheering with everyone out there and leading out there,” kicker Adam Vinatieri said. “It’s great having him back on the field.”

The fact that Luck still is not 100 percent demonstrates just how serious last season’s injuries were. At least he can start knocking items off an expansive to-do list.

In addition to Luck’s continuing workouts, he must break in a new backup quarterback. Matt Hasselbeck retired in February, and Indy signed free agent Scott Tolzien to presumably become the No. 2.

Luck also enters his fifth NFL season with a new quarterbacks coach for the first time in his career. Clyde Christensen left for Miami during the offseason and was replaced by Brian Schottenheimer, a former offensive coordinator with the Rams and Jets.

Offensive coordinator Rob Chudzinski, who took over for the fired Pep Hamilton in November, is now installing his offense, and he and Schottenheimer were on the same staff in San Diego a decade ago. Luck has less than five months to master the new offense before the Sept. 11 season opener against Detroit.

Colts owner Jim Irsay also has said he hopes to complete one of the most lucrative contract extensions in league history by July 4. Luck is entering the final year of his rookie deal.

Luck was asked if he expected to face any limitations at training camp, and he joked that he didn’t have to answer the question yet and wished he had a crystal ball.

Still, the signs are encouraging.

Luck smiled and appeared to be in good spirits — a stark contrast to the disappointment he showed late last season when the Colts’ playoff hopes were slipping away, and he couldn’t do anything to stop it.

“I feel very good, I feel like rolling around, running around and having fun,” Luck said. “I just did everything and enjoyed it.”

Coach Chuck Pagano has talked about having a power-running game since the day he was hired in 2012. By letting Chudzinski, a former tight end, call the plays and with newly signed 222-pound running back Robert Turbin on the roster, Indy seems as committed as ever to getting its running game going.

Luck has spent the offseason evaluating his game.

With Pagano repeatedly urging the 26-year-old star to slide more to avoid tacklers and risk more injuries, Luck acknowledged he will make some adjustments this season though he’s keeping them under wraps for now.

“There definitely were some things (from) last year that will affect the way I approach this year mentally, physically, emotionally in a sense,” he said. “It started with a good training offseason before this, and it will continue now.”