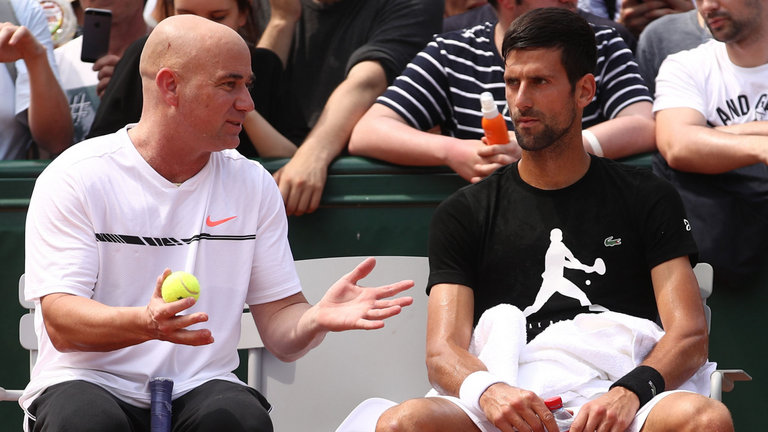 Andre Agassi was originally a temporary addition for Novak Djokovic‘s coaching staff, but after his 2017 French Open first round win, he may be keeping him on longer. At least, that’s the plan for Djokovic.

If Novak Djokovic was hoping to take a little pressure and attention off himself after some rough results, he might very well have found the perfect way to do that by adding Andre Agassi as a coaching consultant of sorts for the French Open.

Well, for up to a week of the tournament, anyway.

With Agassi seated in the stands, generally expressionless during the match and silent afterward, the No. 2-seeded Djokovic was not always at his clean-swinging best while beating Marcel Granollers 6-3, 6-4, 6-2 on Monday to begin the defense of the title that allowed him to complete a career Grand Slam at Roland Garros a year ago.

“I mean, it’s hard to say whether there is significant difference on the court, because it’s only a few days that we are together,” Djokovic said. “So it’s going to take a little bit of time. … I’m patient and, for us, this is a great way to start off our collaboration and friendship and get to know each other and then see where it takes us.”

On a relatively quiet Day 2, Rafael Nadal started his pursuit of a record 10th French Open championship with a 6-1, 6-4, 6-1 victory over Benoit Paire. Other seeded men advancing included No. 5 Milos Raonic, No. 7 Marin Cilic and No. 10 David Goffin, while No. 14 Jack Sock, the top-ranked U.S. man, and No. 31 Gilles Simon – both in Nadal’s section of the draw – plus No. 32 Mischa Zverev all lost.

Defending women’s champion Garbine Muguruza and former No. 1 Caroline Wozniacki won in straight sets, but two seeded American women joined Sock on the way out: No. 19 CoCo Vandeweghe and No. 25 Lauren Davis.

Leave it to the No. 4-seeded Nadal to win relatively simply and then lament a portion of his performance.

“For me,” he said, “it’s important to serve a little bit better than what I did today.”

Djokovic made it sound as if Agassi’s role right now is more about offering life advice than tennis tips.

Sunglasses perched atop his shaved pate, leaning forward with his chin resting on his hands and elbows on his knees, Agassi occasionally applauded during the 2½-hour first-round match. Later, Agassi – who counts the 1999 French Open among his eight Grand Slam titles – declined to take questions from a reporter.

Djokovic, for his part, had plenty to say about their partnership, which sounds more like a brief experiment than the start of a long-term arrangement, even if that’s what the Serb insisted he hopes it can become.

“He has a lot to share with me outside and inside of the tennis lines. I’m really enjoying it so far.”

“Well, he’s going to stay … I hope, ’til the end of this week. Then he has to leave, because he has some scheduled … things that he cannot reschedule. So that’s all,” said Djokovic, whose 29 unforced errors were one more than Granollers’ total. “I’m going to try to use the time spent with him as best as I can, as best as we can. So far, plenty of information, plenty of things to kind of process.”

A year ago, when Djokovic finally fulfilled his quest to win a trophy in Paris, he was working with Boris Becker – who was on hand Monday and visited with Agassi – and Marian Vajda. But Djokovic split with those coaches, as well as other members of his entourage, hoping to regain the groove that made him the first man in nearly a half-century to win four consecutive majors.

Since then, though, the highlight for Djokovic was a runner-up finish at the U.S. Open. Otherwise, he lost his No. 1 ranking to Andy Murray and lost in the third round of Wimbledon, the first round of the Rio Olympics and the second round of the Australian Open.

“You’re developed to kind of flip the next page very quickly. Whether or not you win or lose in a big tournament, there is another big one coming up in a matter of weeks’ time or even less. So for me, it was really strange to get to feel what I felt the end of last season,” Djokovic said, “because I always, even when I would face that before in my career, I felt that I would overcome it very quickly.”

This time, he acknowledged, that didn’t happen.

“I had to work harder,” Djokovic said.

And he opted to make changes.