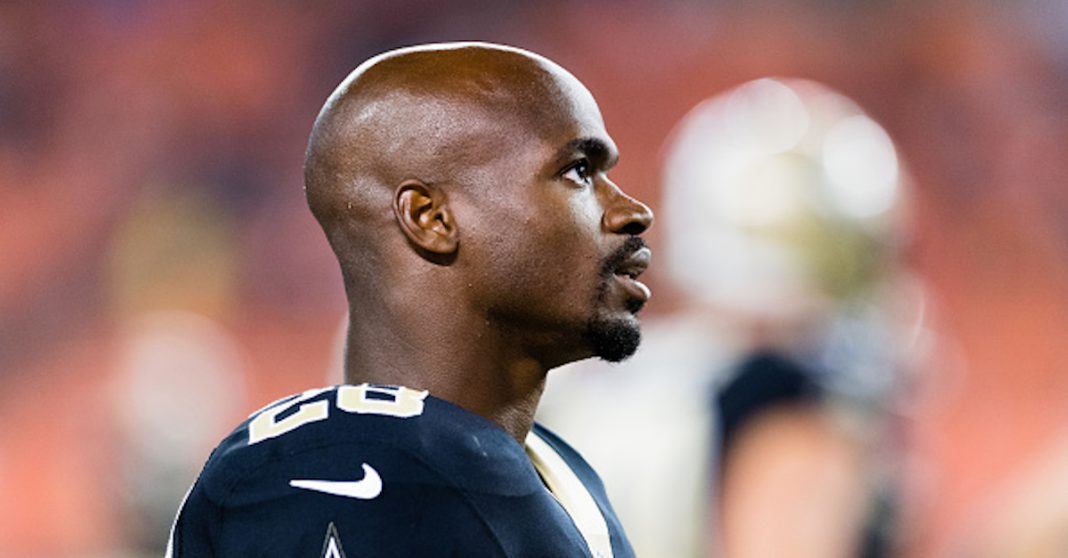 As the New Orleans Saints recover from their loss to the New England Patriots, they may have to deal with some internal drama as well, as newly acquired running back Adrian Peterson doesn’t seem overly happy with his position and play time within the organization.

Peterson first sounded off about his displeasure after the Saints Week One loss to the Minnesota Vikings, Peterson’s long-time team. The back wasn’t happy with his six carries on nine snaps.

“I didn’t sign up for nine snaps, though,” said Peterson. “But, unfortunately, that’s the way the game played out. In my mind, personally, I knew it was gonna take some adjusting You know, me and Mark played in the last preseason game, and [Alvin Kamara] didn’t even play that game. So with all three of us being out there, I know it would take a game or so to kind of get adjusted. So we’ll see how things [go] this week.”

Here’s the problem, Adrian. You’re six carries went for 18 yards against your former team. And in Week Two against the Patriots, your eight carries went for 26 yards. Now, Mark Ingram isn’t doing much better right now, but unless things improve drastically, you can’t expect 30 touches a game if you’re only good for a yard or two each time.

Nonetheless, Peterson insists that he can turn it on at any time, and the Saints would be right to just hand him the ball three times in a row and pray he can make it to the first down marker on one of those carries.

“I can get it started at any point in the game,” said Peterson. “So I’m not that type of guy. I can take it the distance on the first play, I’ve done that in the past before. Just whenever it’s in my hands, I know that’s an opportunity to take it to the house.”

While Peterson may not be happy with his numbers so far, Saints head coach Sean Payton won’t take any responsibility. He never discussed Peterson’s work load during contract negotiations, so Peterson will need to be happy with what he gets.

“I don’t think we’ve ever discussed featuring him like he was featured in Minnesota,” said Payton. “And yet, our hopes obviously are that we have more than fifty snaps like we did a week ago. It’s tough when you have eight possessions. I felt like two-thirds of the call sheet we didn’t even get to, so we ended up in a hurry-up mode in the last part of the game. Hopefully, we have that balance that we’re looking for, and we’ll see how that goes.”

I’m still not sure why Peterson wanted to come to the Saints. We didn’t give him much money at all, and he certainly isn’t going to be playing for a championship this season as the Saints start 0-2 with little to no hope for the near future. And then, to come here knowing this and yell at Sean Payton on the sideline? Man, where do you get off?

Both Peterson and Payton brushed the confrontation off; however, everyone saw what they saw.

“One thing I said to him was, ‘Hey, let’s run this inside zone.’ And we came out, and we ran that,” said Peterson.

Peterson went as far as to say he may have just yelled, “I love you!” during the heated exchange on the sideline.

“There’s no conflict,” continued Peterson. “Let’s not try to spin it like there is. He’s a great mind, so we’re gonna learn from this…It’s no issue. And we have bigger fish to fry. Of course, it’s tough. I’m your ultimate competitor. It was tough. But I knew the type of situation I was coming into. So, at the end of the day, we just gotta figure out how we can just do better.”

Payton wouldn’t give us much of an inside look at what happened either, completely waiving off the question.

“Listen, I’ll tell you if we were in a heated exchange,” said Payton. “…None that I can recall, and I am being honest.”

Instead, he switched topics to talking about the difficulties of trying to cycle through three running backs who all feel they desire their carries.

“It only becomes difficult when you become one-dimensional,” said Payton. “And that happened too early into the fourth quarter.”

Fortunately for the Saints, Peterson has relatively little-guaranteed money on his contract, so it wouldn’t hurt to keep using him the way he’s being used right now. It was a low-risk signing from the beginning.

The Saints do, however, need to keep in mind the safety of Peterson’s children. If Adrian isn’t getting the carries he wants on the field, little Adrian Jr. is going to feel his dad’s wrath at home.