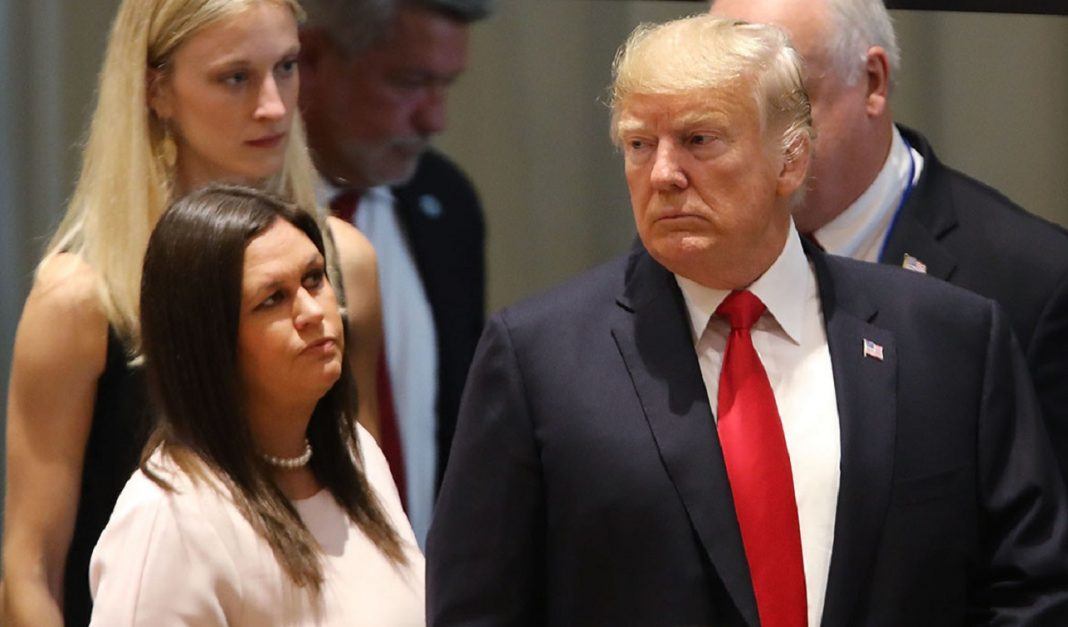 Now that she has left the White House, will former press secretary Sarah Sanders be able to use the influence of Donald Trump in 2022 for an Arkansas governor run? 2018 proved to be a call to action with Trump so will his influence work for or against her.

Sanders seems to be in an enviable position as she leaves the White House for a possible run for governor in her home state of Arkansas. She has the tacit endorsement of a president popular in the state and political connections that go back to her dad Mike Huckabee’s more than 10 years as governor.

Since her departure was announced this month, Sanders hasn’t ruled out the possibility of a run for public office when she returns to Arkansas later this summer. Republican Gov. Asa Hutchinson, who was reelected last year, is barred by term limits from running again in 2022.

Other White House officials who left have remained in the public eye by writing books and hitting the lecture circuit, but none has made a high-profile run for office. A Sanders candidacy could test whether President Donald Trump and questions about his administration’s credibility are political liabilities, even in solidly Republican states.

Trump has openly teased the prospect of Sanders running.

“I have a feeling she’s going to be running for a certain gubernatorial position,” Trump said at a rally in Florida kicking off his reelection campaign last week. “She’d be tough, right?”

Sanders became a household name over the past two years through her sparring with reporters who aggressively questioned her about any number of controversies involving the president. She was regularly skewered by late night hosts and “Saturday Night Live,” which portrayed her as a dishonest loyalist to Trump with an exaggerated southern drawl.

Sanders was already a known quantity in Arkansas before her time in Washington. She appeared in ads for her father’s campaign for governor, managed Sen. John Boozman’s 2010 election and worked as an adviser to Sen. Tom Cotton’s in 2014.

“I’ve told Sarah, it used to be you were known by your dad,” said former state Rep. Jonathan Barnett, a member of the Republican National Committee for the state and a longtime friend of the Huckabees. “Now your dad is known by you.”

Political observers in Arkansas see little downside in Sanders’ connections to Trump, who easily won the state in 2016 and whose approval rating here remains above his national figures. Once a reliably Democratic state, Arkansas is now dominated by Republicans. The GOP controls both chambers of the legislature, all partisan statewide offices and every seat in its congressional delegation.

“In terms of a liftoff, in terms of launch, in terms of a game plan, she got major support from a president that’s extremely popular in Arkansas,” said Skip Rutherford, dean of the University of Arkansas Clinton School of Public Service, located next to the former president’s library. “Among the base — and that base for President Trump seems to be growing in Arkansas — her nature to take on the national media is a plus for her politically right now.”

But three years is a long time and a presidential election away. There’s no guarantee Trump will remain as popular in Arkansas, or even be in office, when and if Sanders makes a bid.

“Three years from now, if the perceptions of Trump have gone south and those are tied to scandals and untruths, then the fact she was the voice of some of that could be damaging,” said Jay Barth, a political science professor at Hendrix College. Yet, “even if he’s no longer president, that doesn’t mean he still wouldn’t be beloved by a lot of Republican voters.”

Democrats are already relishing the idea of a Sanders run, saying it would bring national money and attention to a race that may otherwise be written off.

Republicans caution that it’s not a given Sanders would win the GOP’s nomination. Her potential rivals are some of the party’s top figures who have built up their own network of supporters and donors. Among them are Lt. Gov. Tim Griffin, a former congressman who worked in the George W. Bush White House, and Attorney General Leslie Rutledge, who worked for the Republican National Committee. Another potential candidate is state Senate President Jim Hendren, who is also Hutchinson’s nephew.

Bill Vickery, a political strategist in the state, said he wouldn’t be surprised to see just as much outside money come into the state supporting Sanders’ rivals in a GOP primary.

“She will have 10 times the amount of money needed to win,” he said. “That same amount will be spent to defeat her. We will be awash in money.”