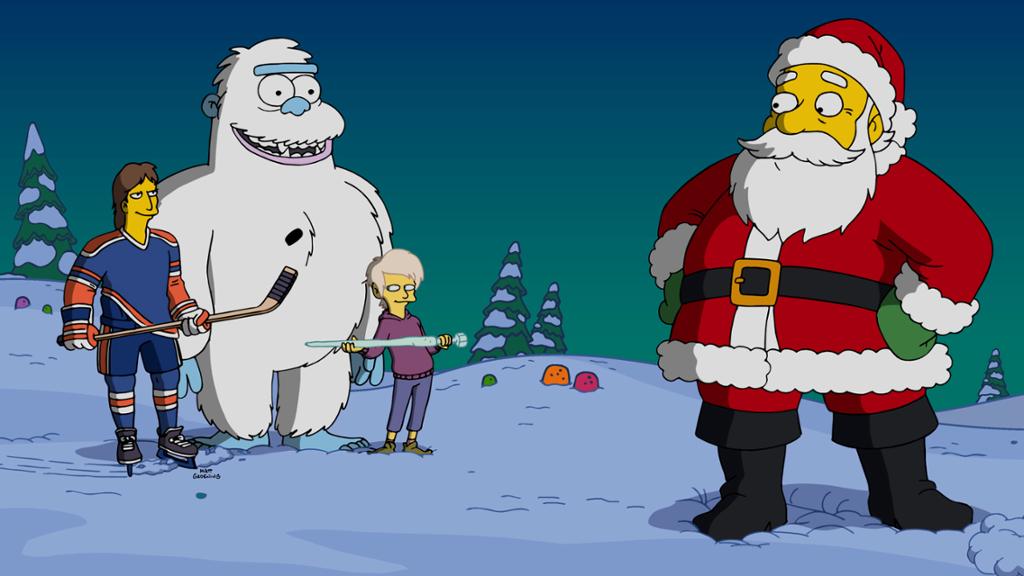 Wayne Gretzky’s likeness appeared on the December 11th episode of “The Simpsons” (The Nightmare After Krustmas) for a period of time that might have been about 5 seconds or less. The appearance appeared within the context of Maggie’s dream, something that could bring in some questions about realism if you want to get nitpicky.

After all, how old is Maggie Simpson? Like 2 years old at the most? How do you dream about a celebrity unless you are conscious of him? That given how could a modern baby be aware of Wayne Gretzky, a hockey star from the 1980s and 1990s. Furthermore, why would Maggie dream of Gretzky in Edmonton Oilers’ colors but no logo – like her dreams factor in copyright infringement? Lastly, how could Maggie know that Gretzky didn’t tuck his jersey in all the way around?

If you don’t want to get nitpicky, I guess Lisa Simpson’s old adage about cartoons not having “to be 100% realistic” explains it away (if you get the reference). However, it was still disappointing to see Gretzky’s appearance hyped up for the last few weeks and then only have him in the episode for about 5 seconds half-way through.

Maggie is being antagonized in her dream by a toy gnome from her bedroom, and Santa Claus assures her that she is safe. The NHL’s all-time leader in scoring then appears beside the abominable snowman and Jack Frost for a split second. However, when the gnome pursues Maggie, Gretzky says “he’s got a gun, ” and everyone flees. That’s the most realistic part of the dream if we assume that it’s set in the right-to-bear-arms USA and not Gretzky’s native Canada. That makes sense since Gretzky’s appearance is in Edmonton Oilers’ away colors.

The Great One isn’t an overtime hero scoring short-handed against Mike Vernon in this case as Gretzky instead disappears over the horizon in lightning-fast time. That’s true to real life too as anyone familiar with Gretzky’s career will tell you he wasn’t much of a scrapper. It would have been fitting if old-school Oiler Dave Semenko appeared to save the day.

The episode, which is episode 10 of season 28, marks the first time that an NHL-er’s voice was on The Simpson’s. However, I do recall an old-school episode where some Philadelphia Flyers appeared in the show without speaking.

“People argue about a lot of things, but they never argue about who’s the greatest hockey player. It’s always him,” Al Jean, a long-time executive producer of the show, claimed incorrectly. “I don’t think there is anybody better at anything than Gretzky is as a hockey player. He had a lot of great stories, and it was a real pleasure to meet him.”