Home All News TV News ‘Walker’ Brings ‘Supernatural’ Alum Jake Abel to the Family With something There... 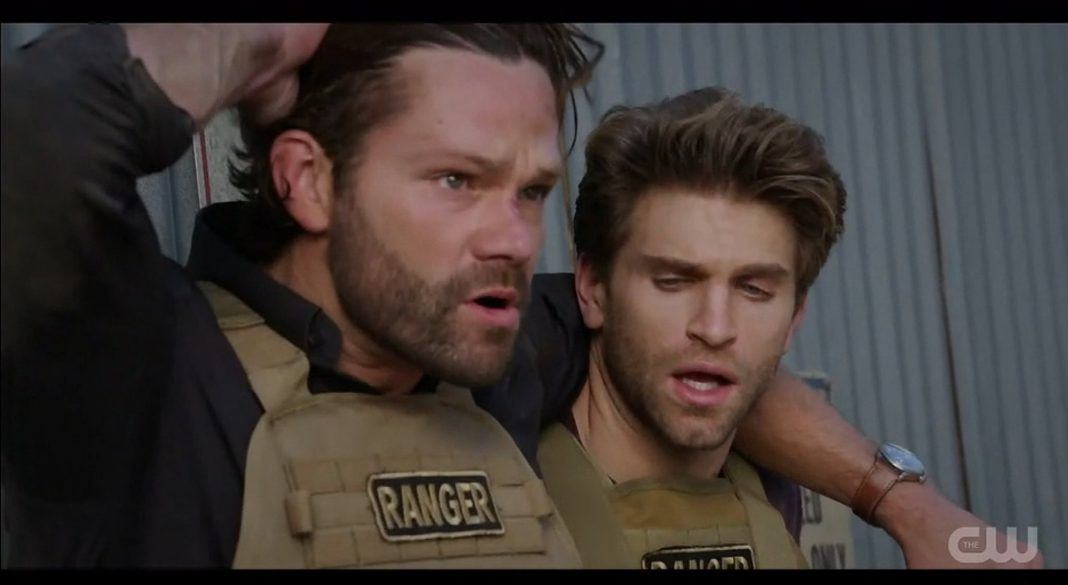 It’s the awkward morning of all mornings at the start of this “Walker” 3.06 episode, when Cordell gets up and Liam is ready to have that talk they discussed but Cordell is a bit distracted by the fact that he left his daughter in jail the night before.

It only gets more awkward when Mawline comes home – with Stella, who she bailed out.

Cordell is angry, saying he left her there to think and learn the consequences of her actions now that she’s an adult (he did have the sergeant separate her, so we know she was safe, which is what I figured, but still…)

Cordell: And she’s MY daughter!

They’re both right actually. She is undermining his parenting, and he is refusing to listen to Stella’s side (though she did a terrible job of actually trying to TELL him her side too.) This family is infuriating sometimes! (Like all families…)

He’s also angry that she told Cassie, accusing her of “meddling in my work as well” – and again, he’s actually not wrong, that’s not her place. But her saying “you need to take it down a notch and you need to hear your daughter out” is also good advice.

Stella FINALLY tells what really happened to Abeline – who she apparently also did not tell the story to for some reason I literally cannot fathom!

August is still infuriating (and hungover), saying he can’t help clean up the mess at the SideStep because he’s the head of the homecoming dance committee. Mawline doesn’t take excuses though, insisting they follow the list of chores that their father left and clean up their mess at the bar. Augie also insists that Cordell wouldn’t let him tell the story, but I find that even harder to believe. He still isn’t owning up to any responsibility or apologizing, insisting he’s becoming his own person and she’s just pissed because she’s losing a sidekick and holding everyone hostage with her indecision.

August: So since you wanna stay hogging up the limelight…who knows, I might even shine…

Wow, Augie. But it’s clear that’s what’s really getting to him, the struggle of the younger sibling in the shadow of their superstar older sibling’s spotlight all the time.

Colton arrives in the middle of awkward sibling rivalry fighting and offers to make breakfast – a “happy curry.” What a sweetie Colton is.

Stella seems truly lost, saying the ranch doesn’t feel like home anymore. Abeline tells the story of her sibling rivalry with her own brother Will, that she felt misunderstood and finally moved in with a friend – and then kind of missed Will.

Mawline promises it will get better with her and her brother.

Geri heads out on a trip that has something to do with Hoyt, though that’s not what she tells anyone. She asks Colton to house sit for her – and in real life, Odette Annable heads out to have her new baby girl!

Meanwhile, Cordell really is trying to do the right thing with Liam, putting aside all the other (substantial) family drama to make time for them to do some healing. They go back to the scene of their captivity to confront their trauma. Liam immediately has flashbacks, and Cordell supports him, saying “you got this, why don’t we do it together?” In they go, Liam once again remembers, and Cordell too. Liam’s right, knowing he did a lot of work in therapy, but that doesn’t stop all the memories from flooding back.

Liam: Sorry Cordi, I thought that I was ready…

Cordell: You’re good, you stepped in. And we can leave whenever you want.

He thinks that Liam is still dealing with the physical torture memories, but Liam says no, it was the mind games. He finally tells Cordi the truth – a theme of this episode, that people need to step up and tell their truths, and other people have to make the time to listen.

The worst part for Liam was when the captors told him they’d killed Cordell and ordered Liam to bury his brother’s body. When he begs to see him one last time and takes off the hood, he sees that it’s Neo, not Cordell.

Poor Liam, I so felt for him – what a horrible horrible psychological torture.

Cordell embraces his brother, saying “I’m here, I’m not going anywhere” and for me as a “Supernatural” fan who misses Sam and Dean so much, this was such a “Supernatural-esque” moment between them. I might have needed a few tissues, not gonna lie.

Cassie is also an unrepentant meddler in this episode, she and Trey bonding over their not-dating woes. I do love that Cassie wants a guy who she can share a beer with while watching Hawk’s Shadow – pretty much how (as a fan) that sounds like a great way to pick a partner! Unfortunately, as Trey points out, her history of being catfished isn’t helping her trust guys.

Which is the introduction for her to be hypervigilant about a visitor at Capt. James’ door. It turns out to be Kevin Golding, aka Jake Abel! Cassie isn’t wild about him at first, saying sarcastically “I love politicians…” lol. But Kevin is in agreement with Trey about the importance of rubbing elbows with Wall Street so they understand the real issues on Main Street, and anyway, who wouldn’t be won over by Jake Abel?

So, Trey and Cassie head to the Mayor’s big fundraiser.

Kevin: I bet you look baller in a dress, which I mean with total respect.

Cassie: That’s how I took it…

The Mayor’s fundraiser is a good excuse for a dressed up Cassie and Trey and Kevin. And puts Cassie on Kevin detail, so they can snipe and banter and obviously end up attracted to each other because this is TV.

Cassie’s convinced Kevin is only ‘fake politician nice’ until she overhears him giving a pep talk to two little brothers hiding under a table. I love that this show is all about the brothers at times!

That of course melts Cassie’s heart a little – just in time for Kevin to collapse and them all to eventually realize he’s been poisoned with nerve gas! There was a threat letter that morning that said “your time is up and you don’t even know it.” Uh oh.

Cordell realizes the letter came from Eastvale, right next to where he and Liam were held, and Liam remembers that he smelled sulfur – as did Kevin on the threatening letter the Mayor received. Cordell puts on his bulletproof vest and Liam comes with him, realizing that the guy who did this awful thing to him may be still out there. Cordell doesn’t want to wait for backup to get there, concerned about a nerve gas release – though I think he should have waited for backup!

The bad guy ends up getting the jump on him, infecting him with the nerve agent – but luckily Liam throws on another vest and saves the day, including injecting his brother with the antidote. Badass Liam to the rescue! Talk about facing your fears…of both walking into danger and of your brother dying.

You get the feeling that shooting the guy who so tormented him felt kinda good, though that’s a pretty complicated message if this were real life since we can’t go around shooting everyone who torments us.

The brothers stagger out; Liam supporting his big brother.

He thanks Liam for saving him, saying that what he did is the reason Cordell is alive. He also apologizes for not meeting him earlier where he was.

Cordell: I guess I’m ashamed of myself.

Cordell didn’t re-enlist so he didn’t miss any milestones with the kids, but when Em was killed, he left and fled, and Liam stayed.  He feels like his family suffers because of him, but Liam says that no, he’s not responsible – only for how he handles a situation or how he avoids it.

Liam: Thank you for coming with me today, it meant a lot. It makes me feel better that we can face it together and that you’ll listen.

Cordi: I will listen, I promise I’ll be better about that.

Cassie connects a bit with Kevin before he heads to the hospital and the fandom is so glad to have Jake Abel as part of the Walker family. I got to tell him that at the “Supernatural” convention last weekend in fact.

Taking Mawline’s story to heart in a way she most likely did not intend, Colton and Stella move into Geri’s house. Cordell comes home determined to listen to his daughter. Standing outside her door, he apologizes for not listening and “for everything”, only to find her gone.

Consequences are another big theme of the episode, and Cordell just got a face full of them. The “Something there that wasn’t before” of the title could be that awareness of the importance of listening that I think Cordell really got, or the deeper trust that’s now there between Liam and Cordi. Or maybe Stella’s leap into independence that got thwarted by her decision not to go away to college.

Whatever it is, I enjoyed Liam and Cordi finally helping each other through the repercussions of their shared trauma, and I’m looking forward to more of Jake Abel playing Kevin – I think he might be the rare man who could keep up with Cassie. And I have a feeling he’d fanboy over Hawk’s Shadow right along with her!

New episode tonight on the CW of “Walker” with Just Desserts!