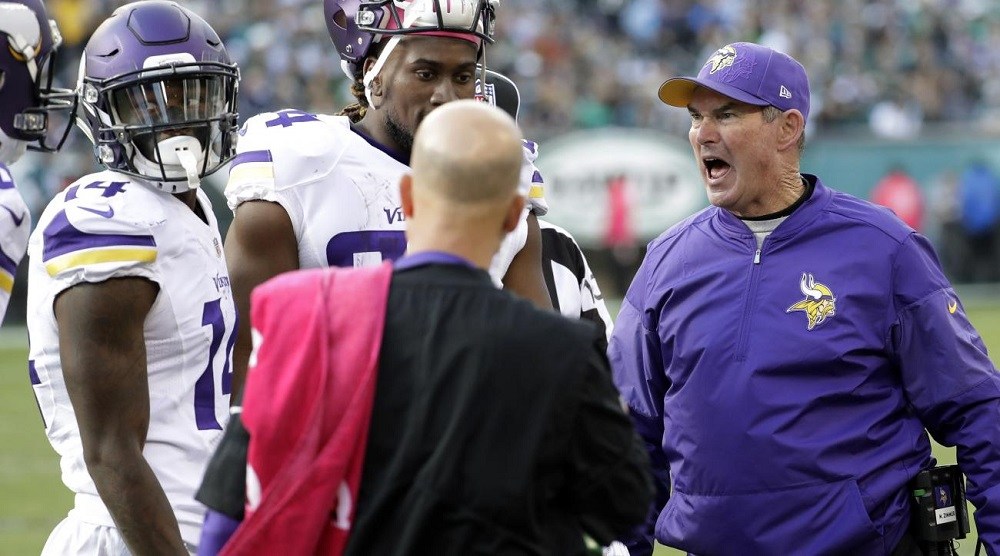 From the headlines this week involving Vikings head coach Mike Zimmer, one would be lead to believe the League has no big problems going on presently. How else can you explain the fact that a head coach has had to come out and publicly deny he had anything to do with assaulting stuffed animals.

Zimmer apparently tried to motivate his unbeaten team (at the time) by scattering “fat cat stuffed animals” around the locker room. Telling his team that fat cats get slaughtered.

Good message to avoid complacency, even if the visual display was a little weird.

However, when those toys ended up splattered with red paint and their pretend throats slashed, Zimmer came under fire for harming these fake beings.

So the coach felt the need to defend himself, telling the media he does some crazy stuff, but the slaughter of the stuffed animals was not his doing.

“I want to set the record straight on an erroneous report that I feel like attacked my character and reputation,” Zimmer said, via the Pioneer Press. “I had nothing to do with that. The stuffed animals I did have here were given to charity and Toys for Tots. I just want to make sure we get the record straight because my foundation website is getting things saying, ‘Your dad’s crazy, blah, blah, blah’; all this stuff. I do a lot of crazy stuff, but I’ll admit to it.”

This stuffed animal controversy may be the low point for ridiculous NFL storylines where an athlete or coach feels the need to apologize or distance himself from a non-issue. Who gives a damn if Zimmer had butchered a bunch of make-believe animals? I get that it could send the message that Zimmer and the Vikings are animal haters (the real life kind). But that conclusion would only be drawn by the most extreme animal activists or people with plenty of time on their hands that they use only to be offended.

Whoever did the deed to the toys was just trying to paint a picture. To make a point with a story.

You know like in a fictional movie or cartoon. Like when Wile E. Coyote gets crushed by a boulder or blows himself up with some ACME dynamite. It ain’t real folks!

It’s amazing to me that the NFL environment has become so soft and politically correct that an NFL coach has to take time to even address the issue of stuffed animals used as a prop.

The League has an idiot kicker who was just released from the Giants for using force against his real life wife. We’ve got players getting concussions on a weekly basis. And of course, the protests continue forward as we hit the mid-season mark.

All these real issues and one of the best teams in the League has to deal with “Fat-Cat Gate.” Everything’s got to be a “Gate” before it can be a big time controversy, you know. And honestly, any player who had to answer questions about the situation had to be careful how he answered even though it was a non-story.

Let some cornerback make fun of a cotton-filled lion’s demise, and next thing you know PETA is at his front door (or maybe this time is would be PETSA). Nevermind the fact that Mike Vick was able to resume his NFL career after what he did to all too real dogs.

I am as big a fan of pets as anyone. I consider dogs to be better quality beings than us humans in fact.

I just can’t see getting riled up over a stunt involving stuffed animal murder.

We tell stories with props. If it’s going to be controversial every time a prop is used to tell a story, then Hollywood should shut down. And every author uploading to Amazon should find a job that doesn’t involve making things up that could hurt someone’s feelings.

An NFL coach from the 80’s would have cussed a beat writer out for even suggesting there was something wrong with the fat cat stunt. This is 2016 though, and the NFL world is a much softer place. On the field, in the locker room, and at the podium.