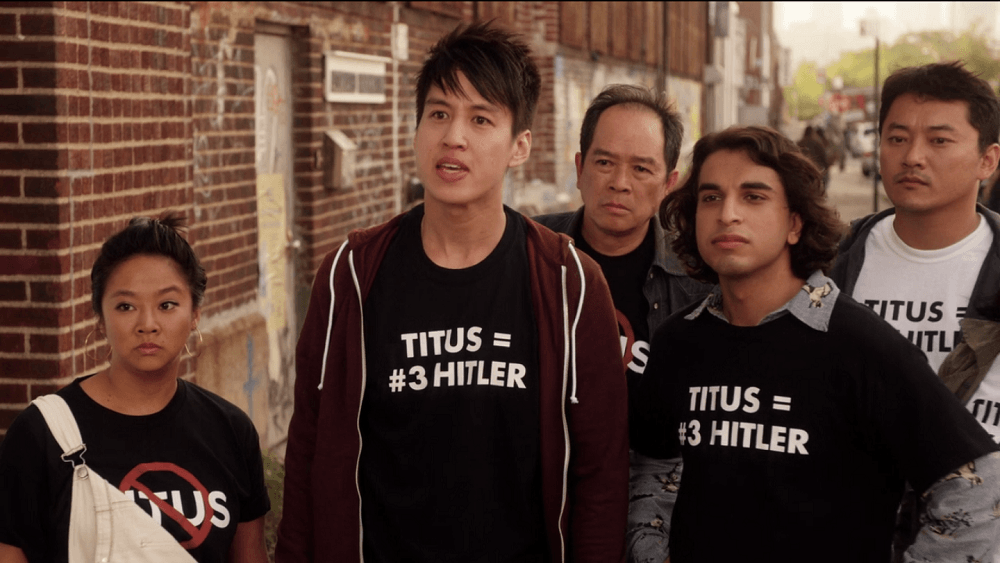 Now that Titus is no longer legally dead on Unbreakable Kimmy Schmidt, he can finally start making money. And while he doesn’t see the need to pay rent or bills, Kimmy agrees to keep taking care of those things if he does something productive for himself. She challenges him to “Use the money for something that matters… I want you to put on a show.” Her suggestion sparks the idea of a one-man show in which Titus chooses his most beloved past life to portray- Murasaki.

He plans to do it in the new performance space, which is perfect for him but horrible for Lillian. She doesn’t like how things in the neighborhood keep changing. She is determined to stop the gentrification that is taking over her beloved neck of the woods.

While Titus is high on the new found opportunity to perform for the world, not everyone is feeling his choice of character. As he searches the Internet for a costume after putting up his posters, he is floored to find his show on the computer, “Where Beyoncé and the president live.” His excitement is soon taken away when he realizes that people are boycotting it. In fact, a watchdog group called Respectable Asian Portrayals in Entertainment has an entire forum dedicated to trash-talking him. What he sees breaks his heart, and he is left in silence. But that’s mostly because he’s in a library.

He rushes home to tell Kimmy what he found. “They named me one of their top five Hitlers of all time.” Kimmy is infuriated and vows to “Talk to the Internet and make it apologize… How can they criticize something they haven’t seen?” Um, welcome to real life Kimmy Schmidt. 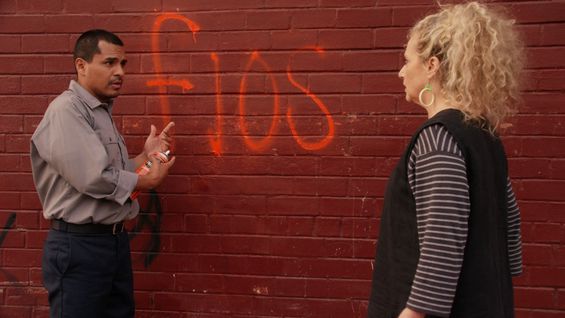 As Kimmy finds a way to defend her friend, Lillian is going around spray painting things on the walls of the neighborhood. There is no way in hell she’s going to let new people take away what makes her hood tick. Most of the graffiti she sees is in Spanish, so she spray paints in Spanish too. But little does she know that the words “FIOS 5” means that a new kind of Internet is available and is not the tags of a Hispanic gang. She is utterly disgusted.

Kimmy is really the kind of friend everyone needs because as she fights cyber bullies for Titus, she helps Jacqueline find her way at her new condo. Yes, she has a place, and while she doesn’t have any money to decorate it, she is happy to have her own. But it’s only for a while, as she can’t afford it. Kimmy gives her the mail she picked up from the post office and in it is an invitation to a wedding. Jacqueline says she can’t go because she doesn’t have a date. Kimmy sees this as an opportunity but Ms. White, what she calls Jacqueline now, refuses to entertain the idea. Her happy go lucky assistant will not let her sit and rot in self-pity and encourages her to create a life where she doesn’t have to depend on a man. After an ill attempt at getting with one of her ex-husband’s friends, Jacqueline decides to reverse the roles. She’ll be the rich one with arm candy by her side, the “opposite of Julian.” Her new hottie is her dog’s young, hipster masseur, Douglas. Kimmy tells her what she’s doing is not what she meant and doing so makes her just like her ex-husband. “You’re Julian now.” Fed up with Ms. White, she storms out. “You don’t deserve my help.”

Letting go of Jacqueline allows her to give all of her energy to Titus. Kimmy is overjoyed to tell him that she got the Internet to apologize. But more than apologize, she got them to buy tickets to his one-man show. He is delighted but after hearing her read their response, he realizes that it is sarcasm. Kimmy maintains that they are sincere but when Titus tells her, “The Internet talks like Chandler”(from Friends) she rereads it as such and is mortified.

“I’m sooooo sorry.  We really care that he’s your friend. Could you guys BE any cooler?” 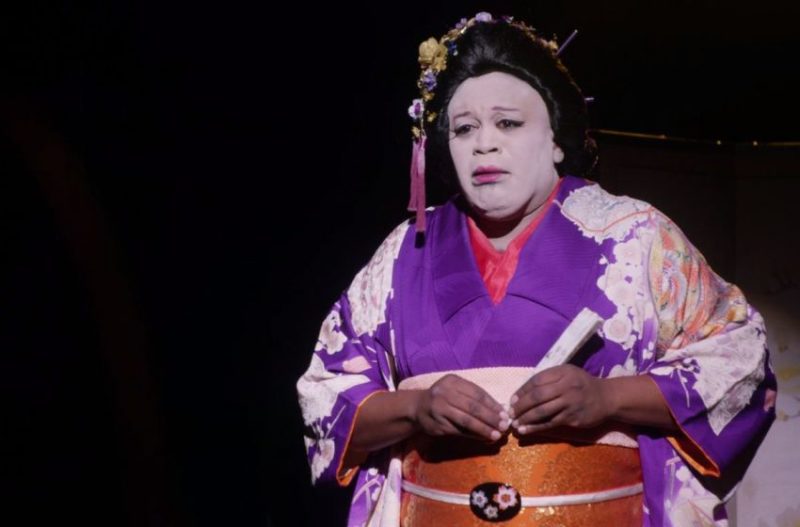 The group shows up and tells Titus, “This show is an abomination.” He argues that it’s homage to Murasaki because he was her, but they don’t want to hear what he has to say. That is until the leader offends a Hindu member of the group by making fun of past lives. Titus decides to give up but remembers that he has always given up in his past lives too. The show must go on and go on it does. The watchdog group ends up falling in love with is Murasaki portrayal and Titus.

Back at her condo, Jacqueline has a nervous breakdown when her boy toy spills wine on her $30,000 rug, which she planned to take back. She then realizes that she was once in his position and releases him to be free of her. Ms. White now sees that the opposite of Julian is being good to people. Thus, she decides to go to the wedding without arm candy.

In the end, Jacqueline shows up alone, only to have people ridicule her. But when Kimmy also shows up to stop her from being like Julian (she didn’t know she let Douglas go) Ms. White sees everyone’s reaction to her friend and goes with it; presenting Kimmy as her new girlfriend.

I bet they didn’t see that coming.