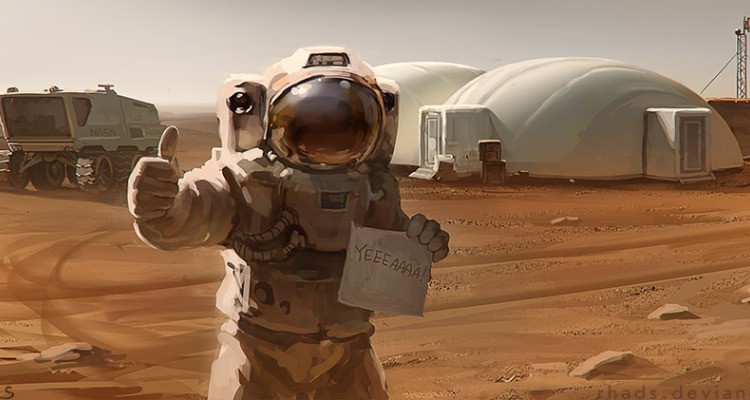 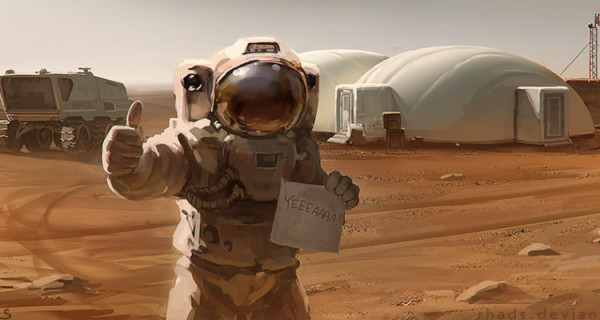 The Martian is an amazing movie. There really is not other way of putting it. From its cinematography to its storyline to it triumphant ending, everything about it is perfect. I am telling you now. I give this movie an A+!

Let me explain why I am riding The Martian so hard. It has all the makings of a great movie and it delivers just that- a great movie. An all-star cast boasts dynamic performances and the overall execution is outstanding. The commitment from the actors really carries it and I’m not just talking about Matt Damon here. From Jessica Chastain to Chiwetel Ejiofor to Donald Glover, they all give riveting portrayals of their characters to a T. They make you feel, they make you believe and that, to me, is what makes a good story.

Based on the book by Andy Wier, the unfolding of the movie is what captivates you and the fact that things can actually go down the way it shows is intriguing. When I tell you I was on the edge of my seat, even to the point where I could not look at the screen. I mean it. Not because there was anything gory or unwatchable, I just could not take the suspense.

Damon plays Mark Watney, a botanist who is left for dead on Mars. Right you knew that already. But what happens during his harrowing journey over the course of 560 Sols (Martian Days) is truly amazing. Being on a planet uninhabited by any living creature, that doesn’t have plant life and is pretty much not suited for humans to sustain life is unimaginable. But the way that Mark is able to use his God given intelligence and his background as a botanist speaks to something that we all have inside of us- a will to live.

I am terrified of Tsuanmi’s and it literally gives me a panic attack to think of what would happen if one were to hit Los Angeles. But you best believe, because I have a will to live and because I am a planner, every single time I go to the beach I map out a plan for how to escape a tsunami. Now granted, I am at a disadvantage for numerous reasons, but that does not stop me from believing and actually trying to not die. And that’s exactly what Mark does.

When I tell you it is inspiring, that’s an understatement. This man was faced with the impossible. But he found a way to grow food, to power a vehicle past 30 kilometers, to even making…MAKING… water. What he accomplishes during his two years on Mars speaks to what we are able to accomplish even in our darkest times.

Along with glorifying the human spirit, it also gives a look into the politics of government institutions. SPOILER ALERT. They don’t tell the crew that left Mark on Mars that he is still alive until three-fourths through the movie. The reason being is that it will be PR disaster for the world to know a man was left on Mars. A PR disaster? The thing about it, I know that’s true. I went to school for public relations, I get it. PR folks do that all the time.

Which brings me to Kristen Wiig in the movie. If there was anything to say about what didn’t sit right with me is her playing Annie Montrose, a NASA PR person. Don’t get me wrong, she was fine and she’s a great actress. I was just surprised that she was in such a serious role, which is good for her, although I was waiting for her crack a joke or push an ice sculpture over (there was no ice sculpture in this movie).

Out of everything that impressed me with the film, Matt Damon’s ability to carry majority of film and do so with great whit and emotion is refreshing. Also Chiwetel Ejiofor’s executes his role as Vincent Kapoor, with such conviction. Oh and Donald Glover as Rich Purnell, the astrophysicist who discovers a solution after other’s failed attempts is spot on. I mean he plays the part very well.

Along with the male actors giving stellar performances, I have to point out Jessica Chasatin. She plays the commander Melissa Lewis of the Hermes the spacecraft. Chasatin takes the role on excellently and does so with great care. Melissa is strong, she is smart and she knows how to admit when she is wrong. As such, she is willing to put her life on the line for her crew and I believe her.

The Martian will leave you with a lump in your throat, tears in your eyes and a renewed hope in humanity.