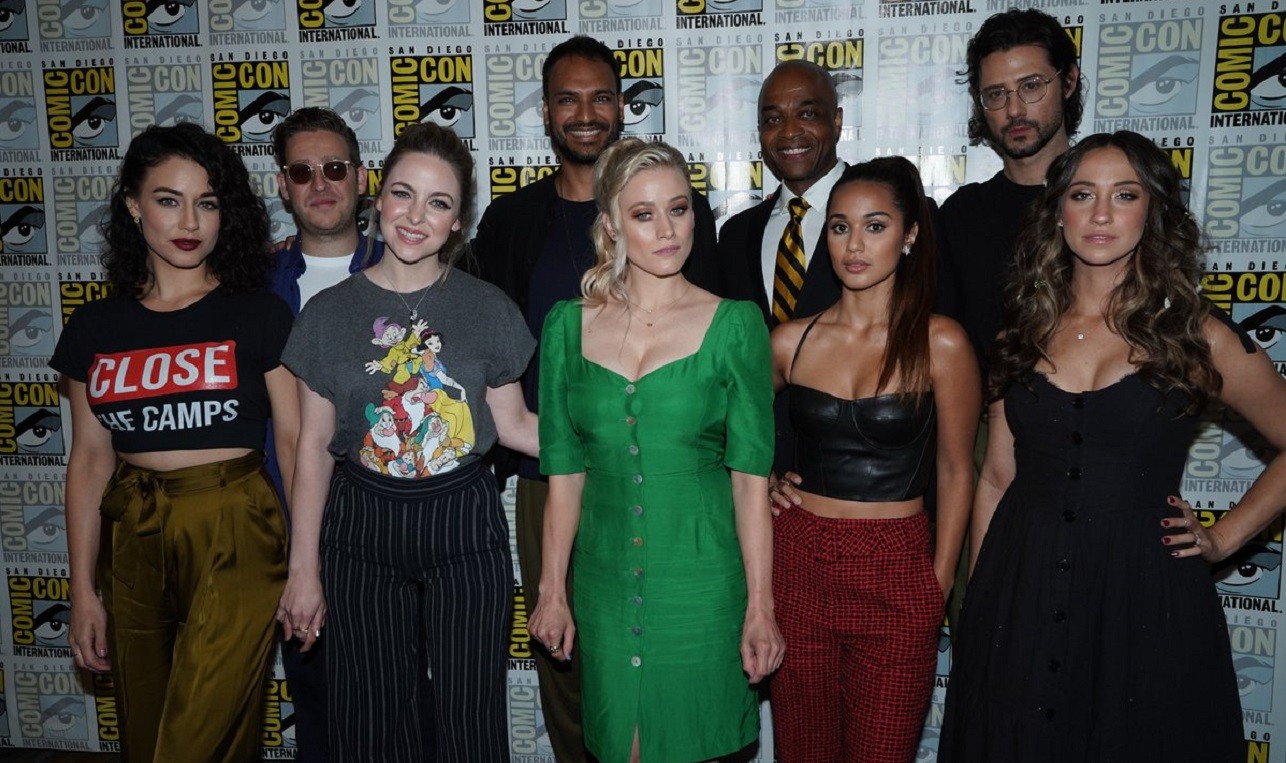 Seeing the cast of “The Magicians” and chatting with them and with showrunners Sera Gamble and John McNamara is always one of the highlights of Comic-Con for me. I was disappointed that the show didn’t have a press room this year. Some people wondered if the cast and writers were avoiding the tough questions that might be forthcoming after the very controversial ending of last season that saw fan favorite character Quentin Coldwater (Jason Ralph) killed.

Not only was Quentin one half of the very popular Queliot ship (with fan-favorite Eliot) but he was also a character who many fans related to strongly. Quentin’s struggles with depression and his fluid sexuality made him a character who inspired many viewers; that his death was self-sacrificing made it even more difficult for some fans to accept.

I admit to being pretty devastated by Quentin’s death too, and to being heartbroken at the ending of a ship I found compelling and quite beautiful. I still love the show and will still be watching, and who knows, death isn’t always forever on television (I’ve been watching “Supernatural” for fourteen years, so I’ve learned that lesson well). But I was very sad not to be able to ask some in-person questions at Comic-Con.

I did, however, manage to attend the panel, and it was entertaining and eased a bit of the sting of last season.

Hale Appleman (Eliot) is one of my favorite actors (and people). The first year I did “The Magicians” press room, he and I ended up talking about our mutual love of Lou Reed and I’ve been a fan ever since. I saw Hale at Wizard World in my hometown of Philadelphia a few months ago, and was so touched when he invited a superfan up to sit with him onstage during his panel! (Shout out to @HighKingEliot!)  Hale gave a shout out again during Comic-Con.

He also talked about how much representation means to him in playing a queer character, and also what it was like to not play Eliot last season and instead bring to life “the monster”.

Hale: I felt like I had to start from scratch in a way. John told me that the monster is a child with incredible curiosity but lack of empathy, so I tried to play that. I also wanted to give him a need to belong and portray him as someone out of touch with social cues who feels like an outsider.

I think he did an amazing job. I felt like I could oddly relate to the monster, even when he was ‘monstrous’.

Olivia: Things for Alice have always been hard, but it was a great opportunity to act, and to explore more of her. She’s such a complex woman. I also worked with a live cockroach, but he was great….

Stella Maeve (Julia) had kind words for her character.

Stella: Julia has been forged from her pain but hasn’t veered into bitterness.  It hasn’t taken over. In fact, it makes her persevere and not give up.

Jade Tailor (Kady): Well, we have a badass woman at the top. (Showrunner Sera Gamble, who is, indeed, a badass).  These badass women are human, and they channel their pain into the power to change.

Brittany Curran (Fen): No one is strong all the time. You can have depression, you can have anxiety, and you can still be strong. Fen has a quiet strength.

Summer Bishil talked about Margo’s breakdown in the tent.

Summer: It was so important to me. It was me, and it was one of the most exhilarating experiences I’ve had as an actress. I just fully immersed myself. I’m not like Margo, I’m still finding my voice, but I understand everything she said in that tent. I hoped it would translate to the audience.

I think it’s safe to say it did.

Rick Worthy is another of my favorites (he also memorably played the Alpha Vamp on “Supernatural”).

Rick: I’ve been asked so many times, is Fogg a good guy or bad guy? And that’s how I play it.  So many people also come up to me and want to drink with me…

Having had that pleasure, it’s a nice way to pass a little time.

Arjun: It was so fun when I got to have them meet. It turned into this big brother-little brother relationship almost.

Trevor: I didn’t! I thought oh, it’s about time! No, really I felt very lucky because Margo is so badass she makes Josh more badass.

Damian: If we could all get a Margo…. And I don’t even like girls!

Me: I think we’re all there with you, Damian…

The elephant in the room question was how will the show move forward without Quentin?

John McNamara gave us some backstory of why they decided to tackle so much loss.

John: They’re grieving, and in a very real way. In our twenties, Sera (Gamble) and I both lost our fathers. And that broke us, but ultimately accepting it made us who we are. So, we always wanted to write about reality, and death is the ultimate reality. It’s the one thing we have in common. Every hour, we’re one hour closer to our death, we just are. So, I’m really enjoying just being here. You’re my family – and we’re all gonna die someday.

It was a sort of dark answer, but it did make sense.

Olivia: The bonfire scene was cathartic. Loss is an opportunity for growth. And it was a very human moment for us as actors. It didn’t feel like acting, it felt real. We were saying goodbye to Jason too.

Hale: Eliot’s relationship with Quentin, he’ll be processing this for a long time. I’m so grateful Eliot got to experience love with Quentin, and to live a whole lifetime with him. When you lose someone so deeply connected to your heart…

A fan asked a question about how the show tackles about the important themes of trauma, mental illness and queerness, and the cast and showrunners had thoughtful answers.

Sera: John and I talked about this. Quentin is contending with depression, because we understand that. [The show expresses] all kinds of inclusiveness. Who you love, who you are, how your brain works. The more things you can express that make you you, the better your experience.

The cast chimed in about their own struggles.

Brittany: I have Generalized Anxiety Disorder, and I always felt bad about it. But it’s just like if you hurt your arm, you go to the doctor. I’m a happy person, but I’m also horribly anxious a lot of the time, and people don’t always understand that.

Jade: The thing I’m learning, still, is that whatever I’ve dealt with, my issues, sexuality, etc, is that there’s nothing wrong with you.

Hale: Eliot is a hero despite the trauma, that I’ve never experienced. He means a lot to me for that reason. Growing up queer comes with its own kind of trauma.

Their candid answers made all of us emotional, including the fan who asked the excellent question.

The cast and crew and writers have clearly bonded together to get through the rough spots, both personal and professional.

Trevor: We’re a close knit family. We’re grateful to the writers who give all the characters a voice.

They also mentioned the upcoming musical episode, which John described as a “plot intensive musical”. Brittany attempted to show off her swordsmanship. No one was injured, though it was a near thing…  And Rick Worthy sang an inspired rendition of “Movin’ On Up” that had the entire cast laughing.

I’m still sad about Quentin, but after this panel, I’m even more excited for more of “The Magicians” – stay tuned for Season 5 which will be back January 2020.