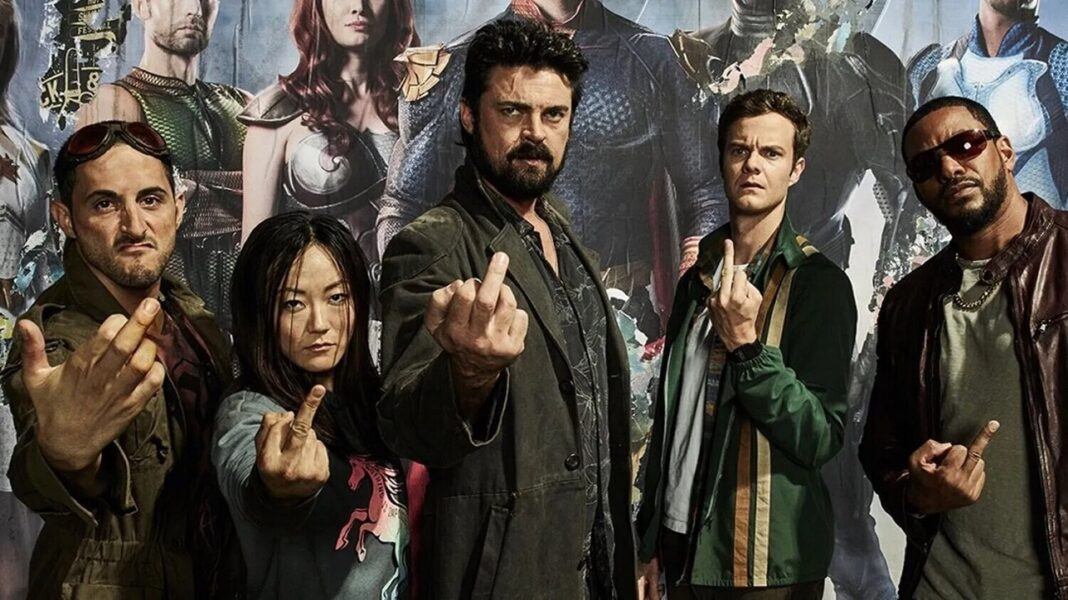 Comic Con at home is definitely a different experience than being in Hall H, but I’m not gonna lie, watching panels in my jammies isn’t the worst thing to happen. Better food than the hot dogs I always seem to grab between Hall H panels too.

Season 2 of “The Boys” will hit Amazon Prime on Sept. 4 dropping three episodes on launch day with five dropping weekly through Oct. 9.

“Eric Kripke and the incredible cast of ‘The Boys’ continue to deliver a wild and action-packed series full of surprises and can’t-miss moments that have made the series a global hit,” said Vernon Sanders, co-head of television, Amazon Studios. “We couldn’t be more excited to see where Eric takes ‘The Boys’ and the supes in Season 3, and to have Aisha Tyler join ‘The Boys’ family as the host of ‘Prime Rewind: Inside The Boys.’”

Added Jeffrey Frost, president, Sony Pictures Television Studios: “‘The Boys’ is unlike any other show on television. It’s incredibly entertaining and compelling and elevates genre programming to a whole new level. We’re very excited about Season 3 as we know Eric Kripke and this incredibly talented cast are going to raise the bar even higher. And ‘Prime Rewind: Inside The Boys’ is the perfect show to bring it all home.”

The biggest news out of “The Boys” panel tonight, moderated by Aisha Tyler, was that the show has an early renewal for Season 3 already, which brought a cheer from the assembled cast and from my living room. Here a few highlights of the panel, which you can watch at the link below.

Showrunner Eric Kripke thanked everyone who’s been watching, saying that fan reaction has exceeded all their expectations. He gave credit to the amazing cast, with people responding not just to the superhero bit but more to the characters thanks to the actors’ talent. They also worked hard to layer in the satire and social commentary, he said, and it’s gratifying that the audience is getting all that they set out to put in the show. Kripke reiterated that the show is a commentary on the world we’re living in, in terms of things like politics, celebrity, and social media manipulation. Season 1 touched on the #MeToo movement and the American weapons industry – Season 2 tackles white supremacy, white nationalism and systemic racism aka #BlackLivesMatter. It’s also more intense and higher stakes. As Kripke said, “crazier, but more emotional.”

According to Kripke, the show is still “the triangle”: strong characters first, madness second, and then if we can sneak in discussion about the real world.

Season 1 of The Boys definitely managed it, and it sounds like Season 2 will too.

The panel included a sneak peek at a very unusual scene in Season 2, which left me going Ewww and Awwww simultaneously and also maybe giggling a little inappropriately.  It includes most of The Boys on a boat, which apparently Karl Urban was actually driving.

Karl: Weirdest thing I’ve done in my career. But really fun – except for Jack, who was in the front of the boat. (And apparently Karen getting seasick in the back).

Karl: I mean, what showrunner would ever let the cast do this themselves?

I won’t give it away, because it should be seen, but:

Kripke: One of the best professional moments of my career. The production crew was like, we’re not really building this ___, right? I said oh no, we’re effing building this.

In Season 2, Karl said that Butcher has to confront just how far he’s willing to go and make some tough choices as his objective changes to trying to find and rescue Rebecca. Would he turn his back on “The Boys?”

Meanwhile, Antony Starr gets to play out some more Oedipal drama in a slightly different way, as we saw in another sneak peek. Let’s just say his desperate yearning for connection plays out in an unusual way as he tries to reconnect with Stillwell. Sort of.

Antony:  He’s painfully lonely, but he can’t force people to connect with him. The physically strongest man on the show is the weakest emotionally.

(He added that being diabolical is such a good time!)

Jack Quaid says that in Season 2, Hughie goes from timid to not so timid. In Season 1, everyone told him what to do, but in Season 2 he begins to realize who he is and how he can do things on his own – he starts to stand up for himself.

Starlight’s evolution also continues in Season 2. Erin Moriarty says that Starlight’s moral compass stays intact, but she’s forced to step into her own power and to adapt to the dark world around her. It sounds like the relationship between Starlight and Hughie will be more complex, as Starlight builds up some thick emotional walls and yet the chemistry between the characters remains.

Jessie T. Usher describes A Train as being in a bad place as Season 2 begins, both physically and in feeling betrayed and hated.

Jessie: What I love about this show is it’s unique. A Train is an insecure flawed superhero. Fear is really what fuels him.

Laz Alonso shared that Mother’s Milk becomes the anchor for the group with Butcher gone, but his own goals are sometimes at odds with The Boys.

To me, he’s one of the most interesting characters – why is he one of “The Boys?” He has a family, a wife, a daughter he cares about, so why would he risk all of that?

Alonso: He’s infected not with V like in the comic, but he’s infected with being a freedom fighter. Risking what he has in pursuit of justice. He’s the voice of morality to keep “The Boys” from being as dark as the supes.

Which makes him pretty fascinating.

Chace Crawford got a special video message from a ‘fan’ during the panel – a very excited dolphin.

Chace: What’s that, baby girl? Oh, I miss you too.

The Deep goes on a complex personal journey in Season 2, he said, hitting rock bottom, exiled and alone. He shaves his head and goes on his own journey to figure out who he is, finally confronted with his own inner turmoil. The character, Chace said, is all about what being famous can do if you get wrapped up in that, and then the rug is pulled out from under you and you’re confronted with not knowing who you are.

Chace: There’s some humor there too.

Karen Fukuhara talked about how challenging it is as an actor to have no dialogue, and how excited she is about an “explosive” fight scene in Season 2 called the “black widow stunt”.

Tomer Capon, as a comic book fan himself, loves the show and Frenchie’s story. Apparently, we get some of his origin story in Season 2, including the fact that he needs to deal with his traumas.

Tomer: A lot of them.

And there’s a new supe for Season 2 – Stormfront, played by Aya Cash. Stormfront is a match for Homelander in that she’s as intense as he is.

Aya: I was so excited to play her, because I thought there would be no chance they would let me play her! She’s a different kind of female character than we’ve seen yet in The 7. What’s so great about “The Boys” is that it’s so topical.

She summed up some of the reasons why shows like “The Boys” feel important right now, when so many people are so defended.

Aya: All sci fi and comics and fantasy allow us to look at current issues with some distance that allows us to see them clearer.

What The Boys Is Trying To Do

Kripke summed up what the show is trying to do before the panel ended.

Eric: Supes are inherently people, prone to the challenges and potential corruption that come with power and access. We started with a metaphor of celebrity, when so many get so much access and can do whatever they want. Power doesn’t necessarily corrupt you, it reveals what you’ve secretly always been.

Aisha Tyler noted that the villains on “The Boys” are complex.

Kripke: I’m kinda incapable of writing straight villains. I have to ask, what made them the way they are? Why would they make such a horrible choice? I bring that, and then these actors bring complicated messy humanity to the role. I don’t want you to agree with what they do, but to understand why.

And that, right there, is why I’m a big fan. My psychologist self can’t resist that.

There will be some new supes in Season 3.

Aisha will be hosting an after-show called Prime Rewind: Inside “The Boys” which sounds like a lot of fun. Looking forward to The Boys return on September 4! The after-show will begin on Aug. 28 with a deep dive look at the show so far.

Addressing the after-show, Kripke noted that the “double entendre” of the title was intended. “It’s a deep dive into how we make this insane thing. Seriously, thanks to Sony, Amazon and the fans. We love making this show so much, and we’re thrilled we get to make more.”

Added Tyler: “‘The Boys’ is one of the smartest, most irreverent, unapologetically badass shows streaming. I became a fan during Season 1 and this season I’m stoked to be flying fans into the heart of the show as host of ‘Prime Rewind: Inside The Boys’ Season 2 is bigger, badder, and more audacious than ever before, so join me after every episode as we dig through the rubble pile of our feelings. I promise, we’ll get through it like ‘The Boys’ — dysfunctional, but together.”

The second season of “The Boys” sees the titular vigilantes on the run and hunted by the superheroes (or “supes,” as the show calls them). Hughie (Jack Quaid), Mother’s Milk (Laz Alonso), Frenchie (Tomer Capon) and Kimiko (Karen Fukuhara) are in hiding after the explosive events of the first season finale, while Butcher (Karl Urban) is off on his own for a bit. Meanwhile, Homelander (Antony Starr) is trying to expand his power in a few new ways and Starlight (Erin Moriarty) is trying to navigate her own place in the Seven as the group shifts. Stormfront (Aya Cash), a social-media savvy new supe, comes in with an agenda of her own, while a larger threat looms, leaving Vought seeking to capitalize on the nation’s paranoia.