Home Reviews ‘Supernatural’: Was Scoobynatural good for you? 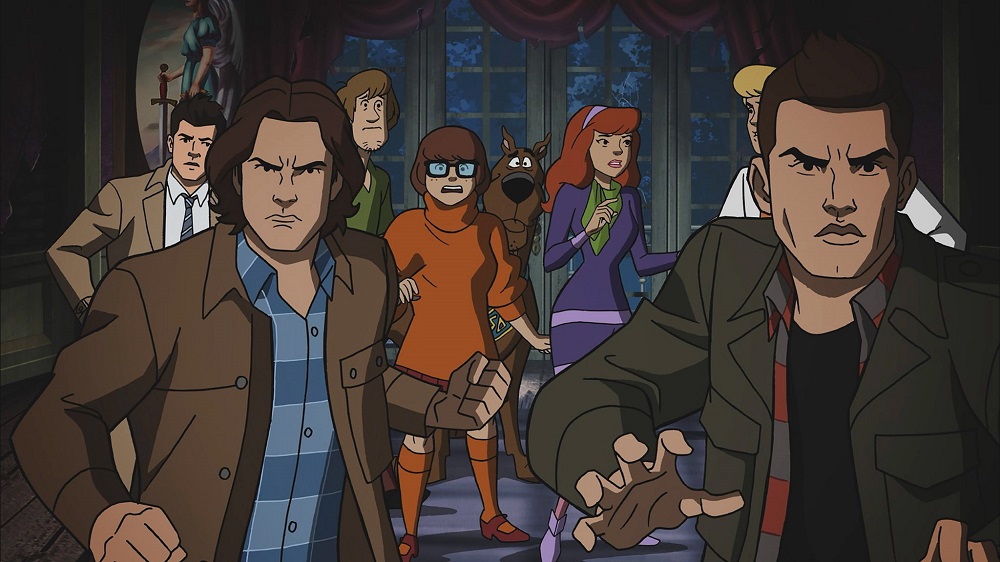 After almost a year of waiting since it was announced, Scoobynatural finally aired last week on Supernatural. Some awkward cheesiness aside, the episode was awesome. Like yours truly, I’m sure it brought back some juicy childhood memories for most of its adult audience. Twitter and Facebook are still beaming.

It wasn’t what I expected as speculated in the previous article but I was not disappointed. In fact, it’s certified fresh. This episode did reference Changing Channels, but it’s also similar to Hollywood Babylon. The audience could use a change of pace from time to time and that’s what this show does best and that’s what keeps it in the air. The show isn’t afraid to pull stuff like this because with the supernatural, you never really know.

What’s next after Supernatural’s Scoobynatural? Probably a musical, like they did with Buffy the Vampire Slayer which was brilliant. I still pull out the soundtrack from time to time only to be reminded how timeless it is. Fan Fiction’s school play doesn’t count. But seriously, showrunners, don’t.

In all the excitement though, all the clips, trailers and released photos kind of took a good ten minutes off the show. That’s ten more minutes of awesome jaw-hanging. But it’s okay. The promotion did its job like it’s supposed to (sold some shirts on the side) and keeping fans interested during a two-week hiatus needed to be done. This episode needed to be seen since it’s been promoted even before the season started. I don’t want to sound like a troll here, but was the amount of promotion necessary or did it just take on a life of its own like the stuffed dinosaur at the beginning of the episode? Is the show no longer that confident with its fans? The ratings are still consistent except surprisingly for War of the Worlds. Just saying, I just think the show revealed a bit much, especially the sandwich eating scene, which was just, groovy.

Now if you haven’t seen the episode yet, kindly skip to the end of this piece, otherwise, SPOILER ALERT. This episode is weird from the get-go suggesting to audiences that it’s not to be taken too seriously. Like it said in some other articles before the show, the boys fight a possessed dinosaur plushie and Dean gets rewarded a TV set. It’s not often that a victim rewards the boys anything for saving his/her life. Maybe they ought to consider doing this for a living—like the A-Team, and Cas can be Murdoch. As seen on the trailers, the boys get sucked into the TV and end up in a Scooby Doo episode, The Night of Fright is no Delight. In all honesty, never caught it so, this is fresh for me. The most I’ve seen of Scooby Doo as a kid was the series with Scrappy in it.

It’s the episode where a bunch of people get an inheritance if they stay in a haunted mansion for a night, Scooby included. The old haunted house trope. Sam and Dean tag along the Scooby Gang to play their supposed part like they did in Changing Channels and solve the mystery of them being trapped. A couple of the residents get which includes the villain lawyer. Cas arrives after the first resident was killed. The sight of dead bodies doesn’t unnerve the Scooby Gang like they should as if they’re NPCs in a video game. They play their parts like they did in the cartoon until the ghost attacks them all and actually hurts them.

Things then get interesting when Sam tells them that ghosts and monsters are real. The gang’s reaction was priceless. Dean gives them some inspirational talk to bring them back in line, and the usual Scooby action ensues to capture the ghost. The producers have managed to capture the spirit of both shows throughout which is quite cool. They capture the monstrous angry ghost which transformed back into the ghost of a young boy. The spirit is tied to a pocket knife which is planted by an unscrupulous real-estate agent on various objects to scare people away from their establishments.

Like in Hollywood Babylon, the agent seems to have the spirit in his control. The agent picked up on the boys and planted the knife on the TV. The boy takes them back to the real world but not before the Winchesters restore the Scooby Gang’s spiritual skepticism by transforming the ghost into a masked villain. The boys freed the spirit and confronted the agent, getting him arrested for tax fraud. The classic ever-present meddling kids Scooby line gets mentioned by the agent, further solidifying the crossover. 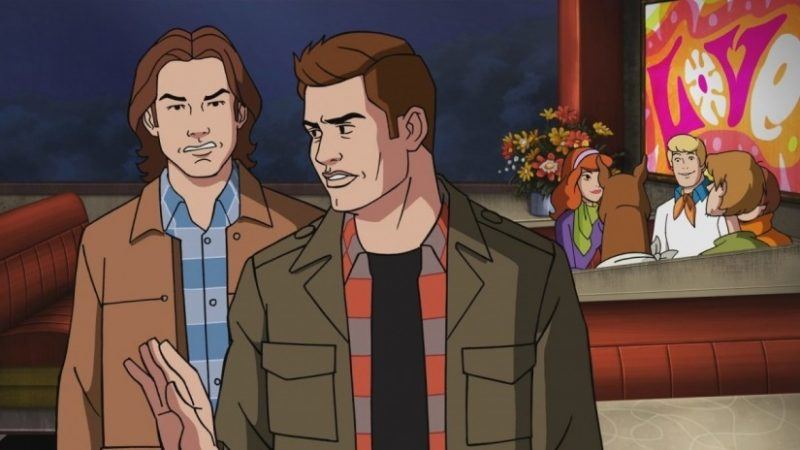 There were totally cheesy moments I didn’t like though. Dean with his stupid ascot, the Elsa thing and him breaking the fourth wall to say Scooby Dooby Doo to an imaginary camera. Otherwise, the episode was cool. Dean was mostly in character, pop culture king that he is. Sam was amazing as well. I liked the way they added some curves on Daphne, probably to make her more attractive to Dean and as a slight departure from being a kids show. But despite Dean’s moves, Daphne doesn’t budge, but Velma did with Sam. They just didn’t animate her like they did with Daphne. There’s enough of that going around the web though.

Scoobynatural is perhaps the most unique Supernatural episode ever since The French Mistake with 90 percent of the episode being animated. I’ve seen the Supernatural anime version, but this is just totally different as it tugs on the heartstrings of two different franchises and several generations. Scoobynatural did its work though. It kept the fans interested and waiting for what comes next, and as some people have tweeted has generated interest in the show from folks who after all these years are not yet onboard. I do know of some who watched a couple of episodes and bought all the DVDs to catch up. That’s the supernatural power this show has on people. Ahem, Supernatural, not Scooby Doo.