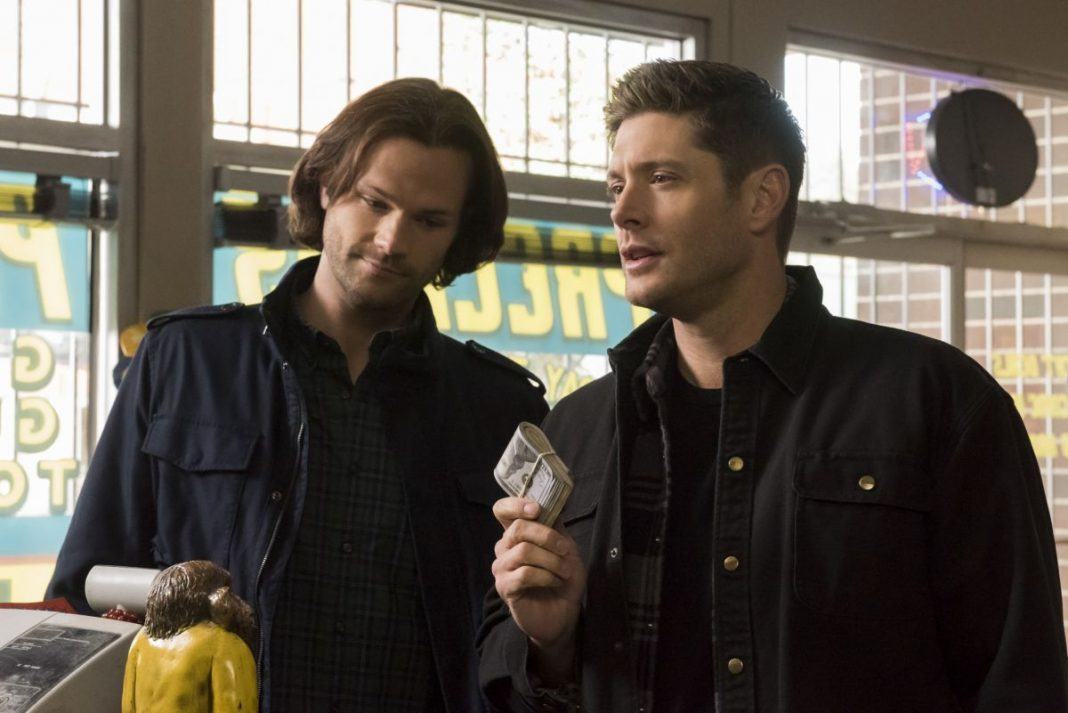 So, I’m going to be straight up with anyone reading this. There are several reasons I haven’t been reviewing Supernatural lately, and yes, I can blame work, the holidays, family stuff; all of which are actually true reasons, but the fact is the real reason was the show itself.

This little show about two brothers has been about anything but them this season. Supernatural Season 14 is going to be three episodes shorter than we are used to, and while I knew that would, unfortunately, mean fewer monster of the week episodes and a heavier reliance on the myth arc (read: boring, drawn-out angel storylines), I did think to myself, “self,” I thought, “at least the storytelling will be tighter”.

I don’t. This is my review, my opinion and I just… really don’t.

I cannot make the AU hunters’ names or faces stick in my brain. My entire timeline jokes about Maggie whenever she’s on screen, we call her Maria, Megan, Melissa, Melody, Michelle, Magnolia, any “M” name you can think of except her own and let me let you in on something: it’s only partially a joke. I literally had to go to IMDb to check what the character’s name actually is because it just doesn’t stick.

As for Mary, I found it increasingly jarring that she should be around 29 years old, but she’s played by the nearly 50-year old Samantha Smith. It’s not a dig at her age; she’s great, stunning even, and TV needs more diversity in female character ages. Women don’t stop existing after 40. But how interesting would it have been for Mary to be younger than her sons?

To not only navigate a new world, but to do so while having not only missed her sons growing up but to have to wrap her head around them being older than her. Instead, we get this odd limbo where Mary is less than 10 and 15 years older than her oldest and youngest. And she’s dating Bobby who is either 30 or 10 years older than her, who knows? Because heaven forbid, we don’t give Mary a love interest each season.

Also, not!Bobby is… not Bobby.

Jack and Castiel make no sense. Why are they a matched pair? Why are both still around? Where do they go?

Not individually, and certainly not as a duo. Both have no real story, and as a weird result, their story overtakes the episodes they are in because the writers are trying so hard to justify these characters.

I’ll get to Wayward later.

As for Michael? Jensen is doing a great job with what he has, but the character is super awkward. For one he just talks so damn much. He actually drones on,. I never thought I’d get bored watching and listening to Jensen Ackles, but here we are. He sounds like he’s either getting interviewed for a documentary or applying for a job (that he won’t get).

That’s the show we’ve been subjected to and that’s not the show we were sold 14, 10, 7, 5, or even 3 years ago. We were sold a show about two brothers fighting against monsters and fighting for each other. Lately though, it seems only one writer remembers that.

This episode was bookended by two heartbreaking brother scenes, the first was Dean saying goodbye to Sam while trying so hard to hide the fact that he’s doing so from Sam. The level of emotion Jensen Ackles puts behind Dean’s eyes is enough to crack your soul in half. And Sam immediately going from that Dean doesn’t want Sam to come with him to knowing something is wrong, wrong, wrong is perfectly played by Jared Padalecki.

This is what these two actors do best: play off each other without overplaying the dialogue or playing over one another. These are two actors who are not trying to steal scenes from each other, but instead they balance each other every time.

Next on Dean’s farewell tour is Sheriff Donna. Odd choice, but it makes sense to wedge her in because Mary and Bobby are staying in Donna’s cabin. It’s admittedly awkward and forced, but to be honest, I don’t care. I like Donna. I like that Donna is happy to see Dean, but she’s not stupid; she knows it’s not just a social call.

I like Donna with layers. This is a character that was dangerously close to becoming a caricature, but once they removed her from Jody and the Wayward crew, she’s flourished. And I like knowing that Sam keeps her in the loop, that he respects her enough to do so. I wouldn’t hate seeing Sam and Donna have more of an friendship, but as we all know, only Dean gets to have real friends.

Remember when I said I’d get back to the Wayward thing? This is where I do that. Here’s the thing, they need to let it go. I’m not buying the excuse of tying up loose ends because this show is 14 seasons deep into loose threads, including the previously failed backdoor pilot.

This show has never cared about dropped stitches; this is just Andrew Dabb and Robert Berens saying that they don’t care that their attempt was passed over. They’re going to do their show any way they can. Dark Kaia and her now cracked pitchfork were forced into the story and so is Dean asking about Jody and “the girls”. Frankly, I don’t even know which of the girls Donna was talking about when relaying her quick catch up. Nor do I care.

It’s twofold, he gets to spend some time with his mom before he sinks himself into the ocean, and also, he gets to hide what he’s doing from Sam, because let’s be real, no way would he have been able to sneak away to the depths of the Bunker to build his water coffin under Sam’s nose. He was able to snow Mary, but Sam is a harder sell.

At least Mary eventually figured it out. Give the world’s most mediocre mom a cookie.

We’ll ignore the, ahem, odd parallel that Mary drew between her & Bobby and Sam & Dean. Nothing to see here folks. We’ll also ignore Mary being like, “should I call Sam? Let’s call Sam, I mean, you’re spending the night away from him, will you be able to sleep? Breathe??”

Before I get into what worked less for me in this episode, let’s talk about one of my favorite parts of this episode: Joe.

Joe had, what, 90 seconds of screen time? And in that short amount of we learned that he’s smart and loyal. I was super worried that Nick was going to kill him. Then later I was worried he was going to be the one Nick chose for the demon’s vessel, but Joe lives! We may see Joe again. And even if we don’t, I’ve concocted a great life for Joe where he works at the grocery store to get himself through law school and works to keep hunters out of jail for all the various laws they break in order to be able to save people from monsters. Because he’s Joe and Joe is THE BEST.

Now here’s the thing, I don’t actually dislike Nick or his storyline. I’ll take it over angelic yawnfests any day. And I think the scene between Nick (Mark Pellegrino) and Donna (Briana Buckmaster) was phenomenal. The set, the lighting, the directing, writing, and acting all came together beautifully in that scene.

What didn’t work was how Nick even figured out it was Mary from what the demon told him. And also, the demon reveal felt like such a cop out. I wanted more out of all that. What also didn’t work for me was Dean scolding Sam for not giving up on Nick. I get that Dean was really talking about himself. I’m not dumb, I get it, but I’m so tired of Dean being a dick to Sam. It’s so exhausting for him to constantly kick and bite and scratch at Sam. I know, I know, you always hurt the one you love.

But, honestly, how can I dwell on all of that when we have an episode that ends on one of the best brother scenes in recent years. Sam’s broken face as Dean tells him the plan, his shattered “ME?” when confronting Dean about his one-sided goodbye and Dean admitting that he couldn’t tell Sam because Sam is the only being that could make him change his mind. Sure, other people can try, Dean may even see their point, but Sam is the only one he’d fold for.

This scene made me briefly forget how utterly stupid this Michael storyline has been. It made me forget about Chekhov’s Arch Angel Blade and the fact that if they just poked Dean in the spleen they’d be rid of Michael and Dean would heal up just like Nick did. It made me forget that this is melodrama for melodrama’s sake because not only is it too early in the season for a major cliffhanger like Dean spending all hiatus in a box at the bottom of the ocean (which is a good thing because hi! Angel season 3 called and it wants its season finale back), but also we are all way spoiled for the 300th episode which is mere weeks away.

I don’t care. That final scene was everything I signed up for years ago. It’s the show we were sold almost 15 years ago.

It’s why I still watch Supernatural.