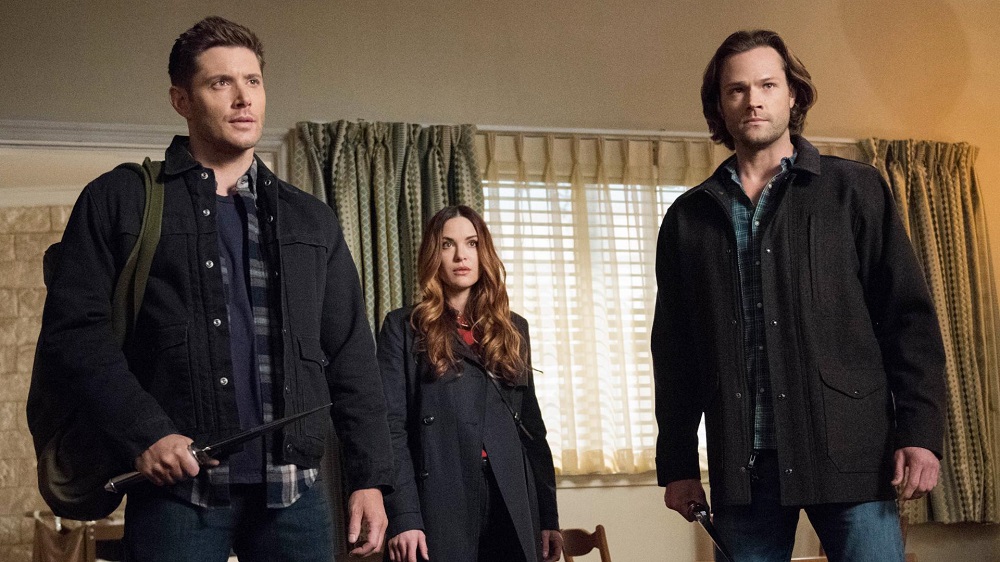 Supernatural Season 13 Episode 13, entitled Sister Jo (actually ‘Desperation’ but Sister Jo seems more fitting) is just awesome. It’s totally a lot more than what the trailers showed, which is exactly what good films and TV shows are supposed to do. When a movie or TV series show all their meat and potatoes in the trailers, it’s actually asking for trouble or it’s an act of desperation to get people to see it. Speaking of desperation, the episode Sister Jo is all about it. And to cap it off, the ending just emphasizes the season number and the episode number. Its awesomeness should be discussed so for those who haven’t caught up, massive SPOILER ALERT. If you’re a hardcore fan, no doubt you’ve seen it and agree or disagree with the following discussion.

Why is this episode all about desperation? Well, as you’ve no doubt seen in the past episodes, Lucifer (Mark Pellegrino) is desperate. Perhaps for once in his immortal and powerful existence, he has become physically desperate. But he’s always been desperate emotionally, wanting Daddy’s love and approval which is still shown here. The episode picks up after Castiel (Misha Collins) seemingly killed him after their escape. Shame on yours truly for even thinking that could happen with a simple angel blade. One question though, I’ve always assumed that Samuel Colt may have found a lost blade and melted it for bullets, but it turned out there was some recipe involved instead in that episode when Sam (Jared Padalecki) killed the alpha vampire in BMOL HQ. Could the Colt kill a run-of-the-mill angel? Never been shown but it was tried on Lucifer once. Guess we will never find out now that Dagon melted it. Sure as hell Alt-Bobby could. Anyway, Lucifer is physically weak, in desperate need of angel grace, not only to get back into shape but to find a way to stop Alt-Michael from taking over this universe. Lucifer kills a poor cupid for his grace. But Cupid grace must be poisonous for archangels.

Seeing Lucifer freezing and begging for money looked hilarious. Imagine Satan begging for money. Not making fun of desperate down-and-out folks but it’s Lucifer we’re talking about. Seeing him in such a state but not lacking in snark is just fun to watch. The crippled guy beside him is also someone desperate but has a more positive ‘vibe.’ He’s both crippled and out of a job. And with desperation, people turn to faith. Why one has to be desperate to do that, I guess, is common in this busy, fast-paced, distracted world. Sorry about that; so crippled guy tells Lucifer that a woman named Sister Jo can heal almost anything which piques Lucifer’s interest. Lucifer pays Sister Jo (Daneel Ackles) a visit. It turns out that the faith healer is the angel Hana-el (Did I spell that right?). 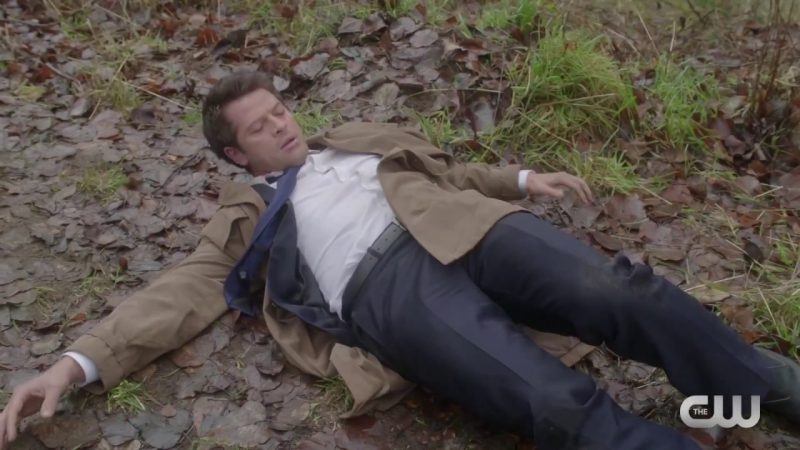 Cas on the other hand, was weakened by Lucifer’s attempt on his life. After he wakes up from his healing coma, he goes back to Asmodeus’ headquarters in search of Lucifer which I find most out of place. Why would you go back to a place you just escaped from if you’re not Fitz from Agents of SHIELD? Now that’s desperation. So he gets back to the Winchesters and tells them that they’ve been talking to ‘Casmodeus’ all along, maybe even passing info to him. Cas also introduces them to the ultimate matter at hand, which is Alt-Michael’s impending invasion. 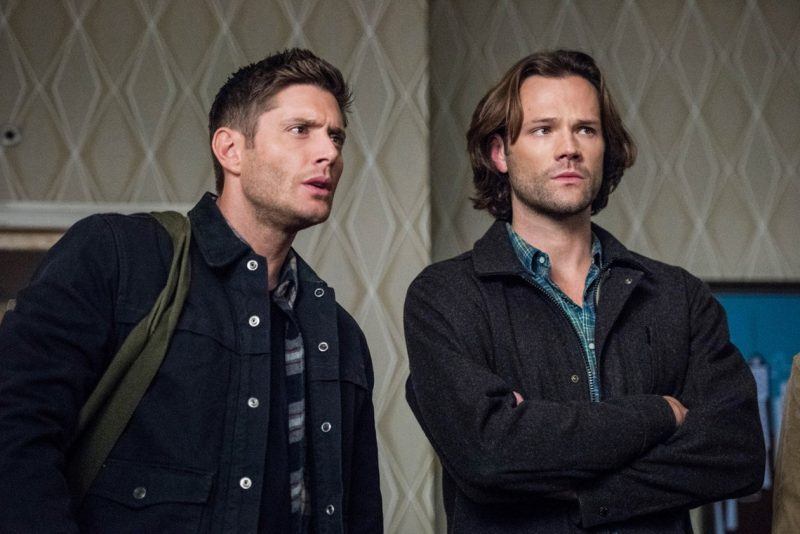 Meanwhile, Asmodeus himself is desperate to find Lucifer before the latter refuels. He orders Ketch to hunt down and ‘kill’ The Devil. On the Winchester’s side of the fence, they get wind of Lucifer and Sister Jo from the crippled guy, who I feel sorry for as he won’t get the chance to be healed now that Jo has run off with Lucifer. The Winchesters and Cas attack Jo’s church only to find Ketch. Ketch proposes that they join forces to kill the devil. Dean says no dice while Cas knocks out Ketch with the angelic version of a Vulcan nerve pinch. That scene was also hilarious. Later, they track down Jo at a motel where she sets them up to fight a ‘weak’ Lucifer. Jo and Lucifer mop the floor with the hunters until Ketch arrives to save the day. Wow.

Still in James Bond mode, he says he got out of Baby’s trunk because he’s Ketch. He comes clean with his working relationship with Asmodeus and offers to become a double agent. Again, the desperate Winchesters agree to help in hunting down Lucifer.

Lucifer and Sister Jo manage to escape which again drains him of power. They decide to do the unthinkable and go to angel HQ (heaven). Lucifer, the king of lies works on his fellow angels and convinces them to let him rule heaven in God’s absence and that he has the ability to create more angels and even restore their wings. The angels are so desperate in their lack of numbers and leadership (Thanks to Levi-Cas and Metatron and themselves) that they agree. The episode ends with that shocking development.

But wait, there’s more. Ketch reports back to Asmodeus who has taken over Crowley’s hobby of looking for lost artifacts. We miss Crowley, and I doubt that Asmodeus could fill his shoes. We do hope that Mr. Kentucky and Supernatural’s creative team can help us fill that void. Asmodeus presents Ketch with the Archangel Blade. The only weapon that can truly kill an archangel, maybe besides God Himself, the spear of Michael (which Crowley rendered inert) and splatter thanks to thousands of soul power. Like the First Blade, it can only be effective when held by someone who it’s made for, another archangel. We’re running short of those these days. But surprise, surprise, the lovable Richard Spreight is truly back. It’s revealed that Gabriel is still alive and is tortured in hell (not sure since when). It turns out that Gabriel’s angel blade can’t really kill Lucifer as the lower gods thought in season 5. It never really killed Gabriel either. It seems Crowley kept a few things secret from the Winchesters as the only time the demons could have captured kept our favorite Trickster is right after his ‘death.’ So to kill Lucifer, Gabriel will have to take over Michael’s duty to kill the Devil. What an awesome end to this half-season.

As for the episode itself, again, the writing is awesome. The brothers take a back seat while it focuses more on Castiel, Sister Jo, Ketch, Asmodeus, and Lucifer. That’s some serious character juggling right there. While some fans (not me) may not totally approve of the seeming nepotistic choice of Daneel Ackles as Sister Jo, Daneel handled herself quite well and is now an added supporting cast as Lucifer’s right-hand angel. Mark Pellegrino remains the king of wit and snark and remains the template of how Lucifer should be played. In the real world, he really makes fans feel for a character that should be hated instead of loved. One problem though is with the prophet Donatello. Yes, he was there. He still has no soul, so he remains in a state of bewilderment and requires a lot of chicken wings to translate the demon tablet in a desperate attempt to find an equivalent spell to open other worlds. In Supernatural, soulless people lack empathy; but he displays it in a form of sincerely wanting to help the Winchesters bring Mary and Jack home. But it’s a small nitpick to an awesome episode. Writers sometimes forget things like that all-powerful antichrist. 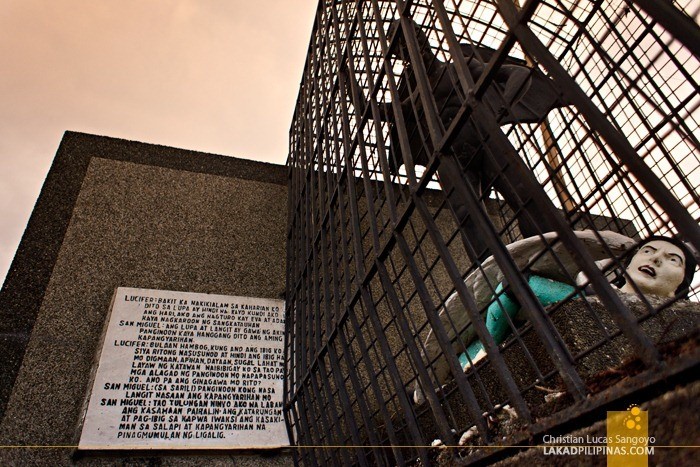 What happens when people lose hope and give in to despair? Lucifer wins. Many are probably familiar with that artwork where Saint Michael beats Lucifer with the devil on the ground trying to shield himself from Michael with his sword held high. In a tomb in Malabon, Metro Manila, Philippines, there’s a statue there on a tomb in a cemetery that shows just the opposite. It’s rumored that the statue seemingly grows with each passing year though no one seems to have taken measurements. The owner, a man named Simeon Bernardo who died in 1934 suffered much during the Spanish regime that he lost all faith in God and that the statue represents how messed up the world was back then. Ironic that it somehow represents the way the world is now.

Check out next week’s Supernatural Good Intentions trailer above.