Day 8 of the 2018 Sundance Film Festival found distributors and studio heads complaining that there just wasn’t enough films for them even though this was quite a strong lineup. It just wasn’t commercial enough for them, and they’ve obviously forgotten this is why Sundance began in the first place.

It was a home away from the commercial mainstream fare, and once it got popular, it turned into what Comic-Con has turned into. A place where the studios now invade and plunder picking up films that they lose interest in nearly as soon as they win the bidding war leaving it as roadkill at the box office when they fail to market it properly. More times they don’t know what they’ve got, and rather than work with the filmmaker directly on marketing, they just slap the film festival logos on the posters hoping that will be enough.

For people who love indie films and documentaries, 2018 was a great year for a wide variety of topics. Here are the highlights from Day 8 as we near the end of this year’s festival.

Check out all of our festival coverage. 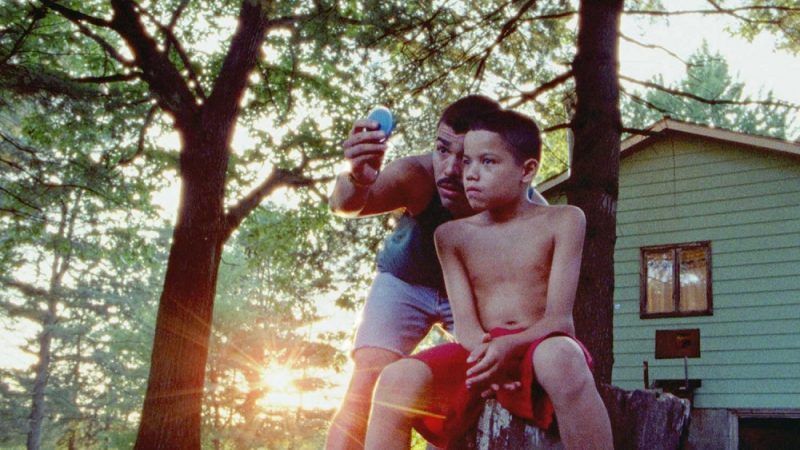 The first narrative film by veteran documentary director Jeremiah Zagar, We the Animals tells the story of three young brothers living with their tempestuous parents in a wooded upstate New York enclave. As their parents violently fight and passionately reunite, the boys are often left to fend for themselves. The youngest is a sensitive burgeoning artist named Jonah, and his wide-eyed point of view and furtive, sensually exploratory illustrations serve as the heart of the film.

After a screening at the Redstone Theaters on Thursday afternoon, Zagar talked about adapting Justin Torres’ novel into a magical realist fever dream shot on vivid and grainy 35mm film. After reading the book in one sitting, Zagar called Torres and said he didn’t want to change anything about the book. He put the book into screenplay format and thought that would be enough. “Then over the years we realized that the translation — I like to call it a translation, not an adaptation — would have to become more cinematic. We’d have to figure out how to make the book cinema,” he said.

In developing a visual language for the film, deciding to shoot on 35mm was key. “The films that influenced this film the most were shot on film. Films like Kes, Ratcatcher and The Tin Drum. So it’s definitely an homage to those films,” he said. “But also our memory is based on format at this point in our lives. We remember the 1920s in black and white, and why is that? We remember the 60s in technicolor, and why is that? This moment now is indelibly printed in our memory as digital — hyperrealistic, Hi-Def video. And we wanted to make sure the audience understood that [the present-tense of the film] was the past, that this was a fever dream, that this was not this moment. And second of all there’s a textural, tangible quality to film that was necessary. I wanted the audience to feel like they could reach out and touch the screen. And because film is a tangible, textural medium, you can actually do that.”

He also talked about the challenges of directing actors, coming from documentary. “The language of speaking with actors is not something I know. I know the language of editing, and of shooting film. I understand the language of speaking to people on set. But it was learning the vernacular of speaking to actors that they had to train me to do,” he said. Though working with children made the transition more manageable. “It was much easier to direct the kids because it was like directing a documentary. We cast them for who they were. Then we had to train them over a year and a half to become actors,” he said.

And that experience of having young children around every day provided further challenges, but also provided some of the magic that made its way to the screen. “Having children on set changes the dynamic of the set. It turns everybody into a family, immediately, because they become the surrogate uncles and aunts to these kids. That responsibility is meaningful and also brings so much joy to everybody involved.” 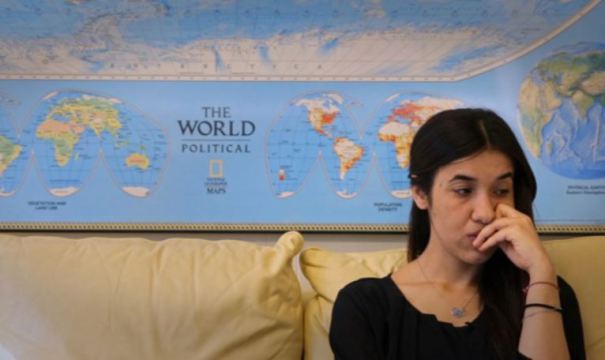 In the U.S. Documentary Competition entry On Her Shoulders, director/cinematographer/editor Alexandria Bombach follows genocide survivor and emerging activist Nadia Murad as she navigates the grueling terrains of mass media and international diplomacy in order to spread the word about the suffering and displacement of her people, the Kurdish Yazidis of northern Iraq. Nadia travels from city to city to conduct interview after interview, speak to countless politicians and strategists, and finally address the UN General Assembly, each time revisiting the unspeakable trauma that she has lived through: ISIS murdered most of her family and brutally raped her before she managed to escape. Through it all, Bombach focuses on the toll it takes on a 23-year-old girl who never wanted to leave her humble village. Alongside Nadia throughout these travels is Murad Ismael, her translator and confidante as well as the founder of the nonprofit organization Yazda, which advocates on behalf of the displaced Yazidis.

At the film’s world premiere last Saturday at The Ray Theatre, Bombach, who was joined by her production team along with Ismael, talked about the breakneck aspects of shooting on the road, with destinations often changing at the last minute and vantages for the camera arising just as spontaneously. “I would catch Nadia laughing at me because I would just run and slide into place,” she said. But the constantly changing, always moving nature of the production spoke to what Bombach’s subject was going through. “Once I was with Nadia and saw her tell her story over and over again, … you could see it take a piece of her. It was still so alive—alive because the Yazidis are still suffering, she’s still suffering through this whole thing,” she said. “I wanted it to be a stable living memory of what she’s experiencing every day.”

She went on to describe how Nadia welcomed Bombach and producer Hayley Pappas into her life on the road, and also how they navigated the inevitable limits to their access. “Nadia was really excited, I think, to have Hayley and I there when we first met because we were both women. I remember her sending us goofy emojis and stuff, and when I had to leave for a week to cover the DNC, she was sending me frowny faces and saying, ‘Where are you?’” Bombach said. “But then as time went on—and I want to be transparent—it got harder and harder. She had done a lot of media, as you saw, which became exhausting, and she was starting to question what this was actually doing. I think she questioned why I was even there. And I didn’t blame her for that. And so there was a period of time when she wouldn’t put the mic on, and I didn’t even want to ask her to put it on.” Bombach said she also would refrain from filming for long stretches that they were together. Eventually they became close again, allowing for the footage at the UN General Assembly, which composes a key chapter toward the end of the film. “It’s such a sensitive thing, and everyone wants something from her all the time. It was difficult to know where those boundaries lie,” she said. “It definitely made me question everything I do, and changed me as a filmmaker.”

Ismael spoke candidly about the difficulties of revisiting his trauma, and of the ongoing difficulties for the Yazidi people. “It’s been a tough day for me today, and I’m sure for all of you. But I’m glad the story is making it to people. And I’m grateful to Nadia that she did all of this and was carrying all of this pain,” he said, before providing an update on the communities. “We have 3,000 in captivity, the mass graves are still not exhumed, 70% of communities are still displaced. Those who went back still don’t have essential services. Still, we haven’t put a single ISIS member on trial; the people who did these terrible things are still free,” he said. “But there are a lot of good things that have happened. We have to fight, and continue.” 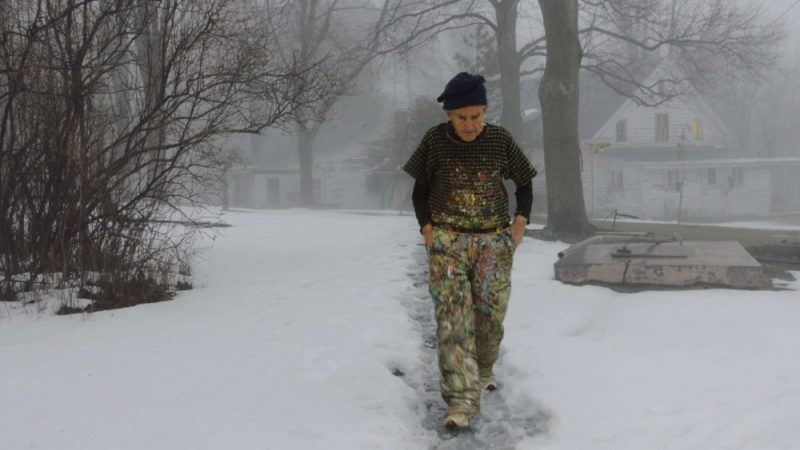 The Price of Everything

In The Price of Everything, which premiered in the U.S. Documentary Competition, filmmaker Nathaniel Kahn offers a look at the place where high art and commerce meet — and in the process provides an illuminating exploration of what we as a society choose to value or not. Besides interviews with high-end collectors, Kahn’s camera completely immerses viewers into the world of contemporary art with visits to artists both remarkably successful, such as Jeff Koons, and the lesser known, such as Marilyn Minter. Kahn gets their opinions about the auction world (Minter admits that sometimes women don’t get their proper respect until they’re either old or dead) and even offers a couple of opportunities to watch them work. The director sets out to determine what society loses when modern masterpieces, selling for astronomical sums, often disappear into private collections away from public viewing. His film will premiere on HBO later this year, but he also has plans to take it around the country to show at museums and in classrooms.

Kahn, who comes from a family of artists, said he wanted his new doc to be a mosaic in the style of Robert Altman’s masterwork Nashville. “There’s not a singular character; it’s multiple characters,” he insisted. “There are intersecting characters, and they come back, and you get to know them. They all have their arcs.”

The film consistently asks, How does one put a price on art? One of the most fascinating elements of the doc is a juxtaposition of two men with similar surnames: modern phenom Jeff Koons, who is as successful as any living artist today (his works continue to break world records at auctions), and ’60s phenom Larry Poons, a contemporary of Lichtenstein and Rauschenberg who has fallen out of favor and now works out of a cramped studio in upstate New York.

The director said he wanted to address the fundamental problem of collectors hiding art away in their private collections, which drives up the fees at auctions. “Ultimately it will shake out because the great work will last and other stuff will be cast aside, and we won’t see it anymore,” he suggested. “One of the concerns with this film is that what it costs is not what it’s worth. We all realize that if you love something, it doesn’t matter if they haven’t sold it. Van Gogh didn’t sell shit in his life, but he’s van Gogh! You have to believe in your eye.”

HBO Documentary Films picked up The Price of Everything for U.S. TV rights, and it will open in a dozen or more theaters before debuting on the cable channel.