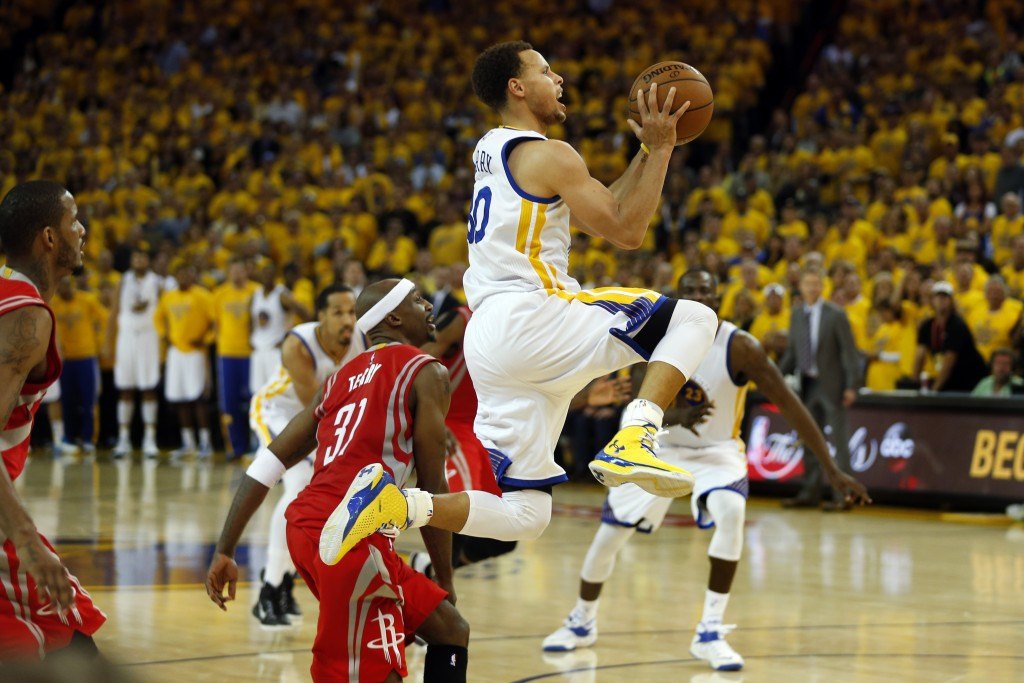 Once again, Stephen Curry proved why he could make history being the first unanimous NBA MVP. Saturday night he surely earned it once again as he astounded from long range and drove to the hoop with flair and fire until a tweaked ankle finally slowed him down.

Once he sat for good after three firm requests to coach Steve Kerr about returning, his supporting cast handled the rest.

“Like a kid in timeout over there on the bench,” Curry said of his mood.

He still did plenty, scoring 24 points as the Golden State Warriors beat the Houston Rockets 104-78 on Saturday in their playoff opener.

The reigning MVP’s status for the next game is uncertain.

Data curated by PointAfter
“Right now I don’t see a scenario I would be out,” Curry said, noting that could change if it gets worse or there’s risk of further trouble. “Pain tolerance, all that stuff, I kind of know what I can deal with on the court.”

Draymond Green added 12 points and 10 rebounds as top-seeded Golden State carried momentum from setting the all-time wins record Wednesday night with No. 73 into a testy playoff opener some 60 hours later.

Game 2 in the best-of-seven series is Monday night at Oracle Arena, and Kerr said Curry is questionable for that one. He will be re-evaluated Sunday.

“You lose the MVP of the NBA it definitely changes your team,” Green said. “There’s some concern.”

The Warriors topped the Michael Jordan-led Bulls of 1995-96, then immediately made one thing clear: That mark will mean nothing if they don’t bring home back-to-back titles to the East Bay.

James Harden scored 17 points and didn’t have a free throw attempt for cold-shooting Houston, held to six field goals in the first quarter of the rematch from last year’s Western Conference finals, won by Golden State in five.

Dwight Howard had 14 points and 11 rebounds, and Harden was limited to four fouls and four points in the first half before helping Houston narrow a 27-point deficit to 16 late in the third.

Curry utterly flustered defensive menace, Patrick Beverley. Then, when Jason Terry took a turn at stopping the reigning MVP, Curry pulled up for long 3s and drove the baseline for reverse layups on the left side. He dribbled right through traffic in the paint late in the first half before double-pumping and beautifully spinning the ball off the glass.

He didn’t slow down until hurting his right ankle just before halftime, but he got it re-taped and briefly returned before heading back to the locker room with 8:31 to go in the third to have it taped once more and not returning to the game.

A day earlier, when Klay Thompson was asked whether Beverley had a chance to stop Curry, the fellow Splash Brother’s simple answer was “no.”

Curry, who made an NBA-record 402 3-pointers in the regular season, went 8 for 13 with five 3s while playing all of about 20 minutes. Thompson scored 16, Marreese Speights matched his playoff high with 12 points, while Andre Iguodala dished out seven assists.

Things got heated in a hurry.

With Beverley smothering Curry’s every dribble, they became tangled up with 6:31 left in the first quarter. Curry kept his dribble while going down to his left knee before their arms got entwined and led to shoving.

“It felt it was a little too much, so I protected myself and moved on,” Curry said.

Beverley immediately received a technical then, after a review, Curry also received one.

“It’s part of the game; it’s playoffs. Emotions are going to be high, and it’s going to get chippy out there,” Howard said. “I think we allowed it to get us a little frustrated. We’ve got to figure out a way to play through that.”

Perhaps the early start — 12:30 p.m. local time — contributed to both teams’ cold shooting out of the gate.

They missed their first seven shots combined before Curry’s 3-pointer at 9:41. Houston missed its initial six before Howard’s dunk and three-point play at 8:24.

Beverley wasn’t part of that losing round for Houston in the West finals. He had undergone season-ending left wrist surgery last spring and was relished to being a sole spectator.

The Warriors have dominated this rivalry of late, winning nine in a row and five consecutive at home.

Now, Golden State’s lone focus is the 15 remaining victories it needs to repeat after capturing the franchise’s first title in 40 years.

Interim Rockets coach J.B. Bickerstaff insisted before the game that his team had no concerns with the raucous home crowd, the Warriors’ wins record or any other potential distraction. Though the Rockets really didn’t play like they were unaffected.

Houston, which reached the playoffs on the final day of the regular season as the No. 8 seed, shot 35.7 percent and went 6 for 22 from long range. 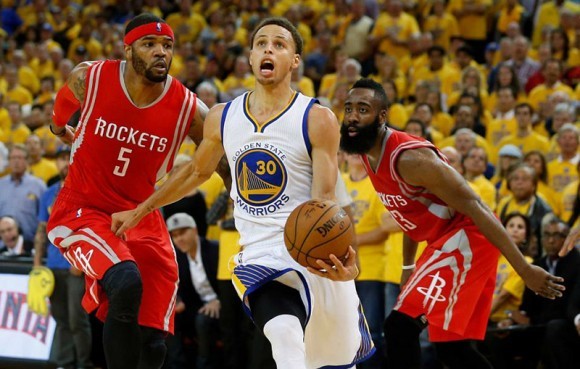 Rockets: Houston’s 33 points were the fewest allowed by Golden State in a playoff first half in the shot-clock era. … The Rockets allowed 25 second-chance points.

Warriors: Golden State committed 11 of its 18 turnovers in the third. … Curry ran his streak of games with at least one 3 to 174 — 152 in the regular season and 22 in the playoff. … The Warriors weren’t the only defending champion playing in East Oakland: Next door in the Coliseum, the World Series champion Kansas City Royals faced the Athletics, making for quite a tailgating scene early Saturday in the parking lots surrounding both venues. There were hundreds of empty seats in Oracle at tipoff and many left the blowout early.