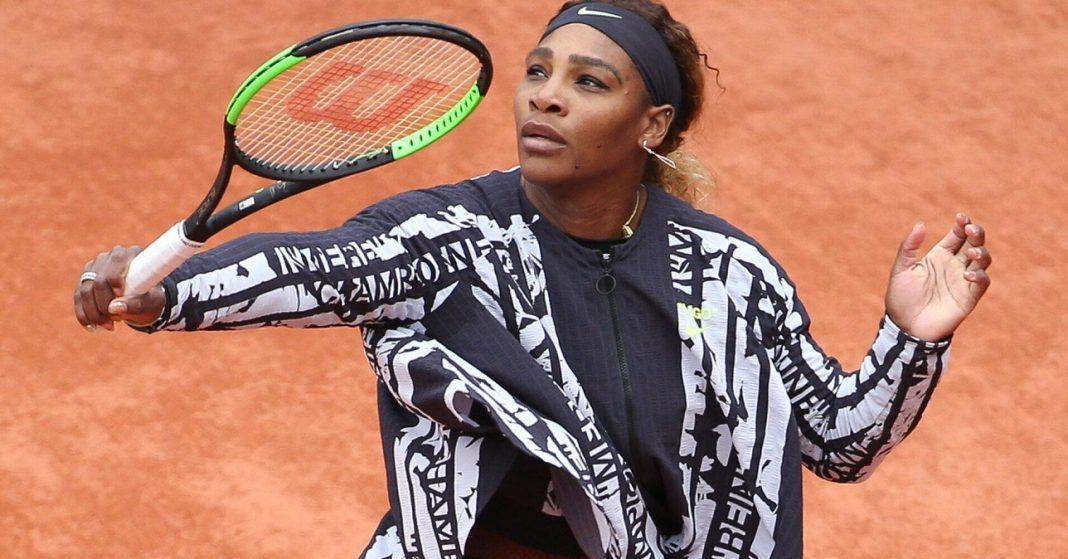 Serena Williams returned to the 2019 French Open with four words on her jacket which she more than lived up to defeating Vitalia Diatchenko 2-6, 6-1, 6-0. Her first set tested her, but she rebounded from her mistakes, and this was one mistake too far for Williams.

Sure, the bad backhand put her behind only 15-30 at the outset of the second set of her opening match at Roland Garros on Monday. What made the miscue so bothersome? She’d already dropped the first set against 83rd-ranked Vitalia Diatchenko — and Williams’ unforced error total already was at 15 on a windy evening.

So she reacted by throwing her head back and letting out a scream. Then she stepped to the baseline to serve and stomped her right foot. And simple as that, Williams righted herself: She won 11 of the next 13 points, and 12 of 13 games the rest of the way, to come back for a disappointing-to-dominant 2-6, 6-1, 6-0 victory at the French Open.

“I just was so frustrated at that point, because I have been training well. The past week and a half has been really good, and, God, it was, like, ’This isn’t the Serena I have been practicing with — or that I see every day,” Williams said afterward. “I just let out this roar, and here I am. Yeah, so maybe that helped.”

She arrived on court with a black-and-white jacket bearing words such as “champion,” “queen,” “goddess” and “mother” in French.

“Those are things that mean a lot to me and reminders for me — and for everyone that wants to wear it,” Williams explained. “Just remind everyone that they can be champions and are queens.”

A reporter told Williams those four words are “a lot to carry,” to which the 37-year-old American replied: “It is a lot to carry, but so is being Serena Williams.”

She made her return to Grand Slam competition in Paris a year ago after missing five majors because of the birth of her first child. Williams pulled out before the fourth round because of an injured chest muscle, then was the runner-up at both Wimbledon and the U.S. Open.

Williams came to Paris this time having withdrawn from each of her past two tournaments because of a balky left knee, and the one before that because of illness. She had played only nine matches all season, and so her pursuit of a record-tying 24th Grand Slam title — fourth at Roland Garros — seemed no sure thing.

That goal seemed even further from her grasp with the way things began in Court Philippe Chatrier against Diatchenko, a Russian who hits two-fisted shots off both sides and upset Maria Sharapova at Wimbledon last year.

“I just got nervous out there and I stopped moving my feet. And (it) was, like, concrete blocks on my feet. I was like, ‘You got to do something,’” Williams said. “I was just off, basically. And then instead of correcting it, I just kept getting worse.”

Could the nearly impossible happen? Could Williams lose in the first round of a major? She’d only done so once before in 70 Slam appearances — and that happened at the French Open, in 2012.

But once Williams recalibrated everything, she took charge.

One of her good friends, and another former No. 1-ranked player, Caroline Wozniacki, went in the opposite direction Monday, going from playing a perfect set to quickly fading away against an opponent who never previously had won a Grand Slam match.

In a performance emblematic of a difficult season, last year’s Australian Open champion bowed out in the first round 0-6, 6-3, 6-3 to 68th-ranked Veronika Kudermetova of Russia.

“Definitely wasn’t the best match I’ve ever played,” said the 13th-seeded Wozniacki, who had only 15 winners to Kudermetova’s 40.

The way-up-then-way-down showing by Wozniacki stretched her losing streak to four matches.

Other seeded players exiting on Day 2 included No. 12 Daniil Medvedev, No. 15 Nikoloz Basilashvili, No. 20 Denis Shapovalov and No. 32 Frances Tiafoe on the men’s side, along with No. 18 Julia Goerges on the women’s.

“Obviously very depleted and had nothing really in me,” said Tiafoe, now 0-4 at Roland Garros.

Before Williams took over the main stadium, Rafael Nadal began his bid for a record 12th championship in Paris and Novak Djokovic got started on his quest for a fourth consecutive major trophy. Both won in straight sets.

When it was Williams’ turn, she needed a bit to get going.

Diatchenko sat at changeovers with a towel covering her head, as if embarrassed to be seen there.

At the beginning of the match, Diatchenko said, “I was No. 1 between us.”

But as things progressed, a better version of Williams emerged.