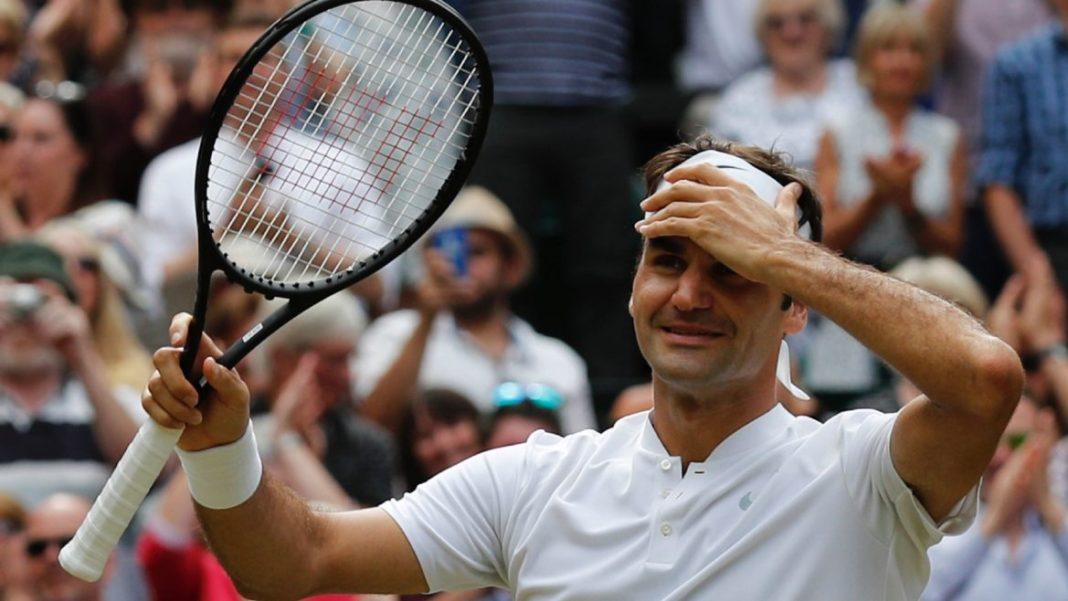 It was only 14 years ago when Roger Federer beat Mark Philippoussis for his first Wimbledon title, and on Sunday he made history winning his 8th title against Marin Cilic.

After Roger Federer closed out a Wimbledon final that was more of a coronation than a contest with an ace, he sat in his changeover chair and wiped away tears.

That is when it hit him: His wait for record-breaking No. 8 was over. Until then, Federer wasn’t focused on the notion of winning the grass court tournament more often than any other man in the history of an event first held in 1877. All he’d been concerned with, consumed with, was being healthy enough to compete at a high level and, he hoped, to win a title, regardless of what the total count would be.

“To mark history here at Wimbledon really means a lot to me just because of all of that, really,” he said. “It’s that simple.”

He couldn’t be sure another final, let alone title, was possible a year ago, when he lost in the semifinals, then took the rest of 2016 off to let his surgically repaired left knee heal.

Sunday’s outcome was only in doubt for about 20 minutes, the amount of time it took Federer to grab his first lead.

Cilic said afterward he developed a painful blister on his left foot during his semifinal Friday, and that affected his ability to move properly or summon the intimidating serves that carried him to his lone Grand Slam title at the 2014 U.S. Open, where he surprisingly beat Federer in the semifinals.

This one was all Federer, who had been tied at seven championships with Pete Sampras and William Renshaw in what’s still officially called Gentlemen’s Singles. Sampras won all but one of his in the 1990s; Renshaw won each of his in the 1880s when the previous year’s winner advanced automatically to the final.

With clouds overhead and a bit of chill in the air Sunday, Federer’s early play was symptomatic of jitters. For everything he’s accomplished, for all of the bright lights and big settings to which he’s become accustomed, the guy many have labeled the “GOAT” – Greatest of All Time – admits to feeling heavy legs and jumbled thoughts to this day.

In the next game, Federer broke to lead 3-2. He broke again to take that set when Cilic double-faulted, walked to the changeover and slammed his racket. Cilic sat and covered his head with a white towel.

With Federer up 3-0 in the second set, Cilic cried while he was visited by a doctor and trainer. He said that was not so much a result of his foot’s pain as the idea that he could not play well enough to present a challenge.

“Very tough emotionally,” said Cilic, whose foot was re-taped by a trainer after the second set. “I knew that I cannot give my best on the court.”

It might not have mattered. Federer was, as he’d been all tournament, flawless, the first man in 41 years to win Wimbledon without ceding a set. Against Cilic, he had 23 winners, only eight unforced errors.

This caps a remarkable reboot for Federer, who departed Wimbledon a year ago with a lot of doubts: His body was letting him down for the first time in his career. He skipped the Rio Olympics, the U.S. Open and everything else in an attempt to try to get healthy.

It worked. And how.

Feeling refreshed and fully fit, Federer returned to the tour in January and was suddenly playing like the guy of old, rather than like an old guy.

In a turn-back-the-clock moment, he faced rival Rafael Nadal in the Australian Open final and, with a fifth-set comeback, won. It was Federer’s 18th Grand Slam title, adding to his own record, and first in 4½ years. Those who had written Federer off needed to grab their erasers.

The formula made sense, clearly, so why not try it again? Federer skipped this year’s clay-court circuit to be in top shape for the grass courts he loves so dearly. Sunday’s victory made Federer 31-2 in 2017, with a tour-leading five titles.

“On one side, yes, it surprises me. On the other side, I know he’s able to do so many things. So it’s not surprising,” coach Severin Luthi said. “But when it happens, it’s amazing.”

Yes, Federer is back to being supreme in tennis, lording over the sport the way no man has.

He’s not, of course, the same 21-year-old kid who had a ponytail and scruff when he beat Mark Philippoussis in the 2003 Wimbledon final. Or the teen who, two years earlier, beat Sampras himself at Centre Court in the fourth round, their only tour-level meeting.

Federer’s hair is cropped, his face clean shaven. He’s a father of four, and both sets of twins – boys, 3, in their light blue blazers; girls, 7, in their dresses – were in the guest box for Sunday’s trophy ceremony.

One son stuck a couple of fingers in his mouth until a sister grabbed his hand.

“They have no clue what’s going on. They think it’s probably a nice view and a nice playground. But it’s not quite like that here, so one day, hopefully, they’ll understand,” Federer said about his boys.

As for the girls, he said: “They enjoy to watch a little bit. They come for the finals, I guess.”

When Dad is Roger Federer, you can wait until the last Sunday to show up.

And you just might get to see him cradle that gold trophy. 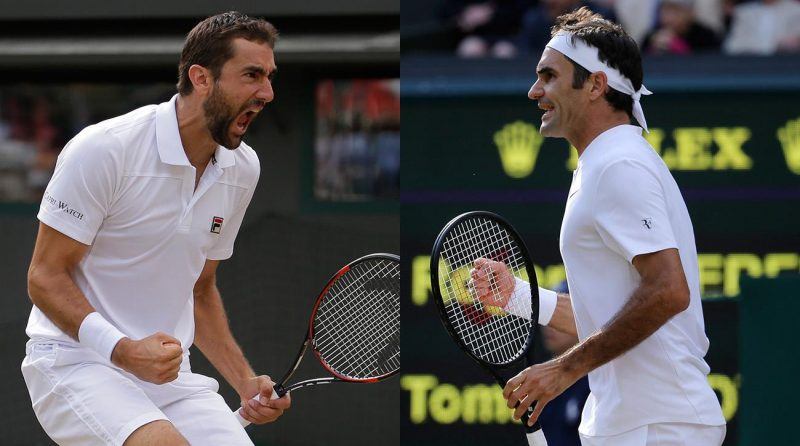 In pain and in tears, Marin Cilic never really had a chance.

The big-serving Croat played with a blister on his left foot in Sunday’s Wimbledon final against Roger Federer. Cilic looked good for a while, but the injury quickly got worse as Federer quickly got better and won 6-3, 6-1, 6-4.

“It was definitely one of the unfortunate days for me,” Cilic said after losing on Centre Court. “Fluid just came down under my callous in the foot. … Every time I had to do a reaction fast – fast change of movement – I was unable to do that.”

Cilic said he first felt the blister during his four-set victory over Sam Querrey in the semifinals. The 2014 U.S. Open champion said it wasn’t that bad on Friday, but it got more serious that night.

“I felt that the foot wasn’t so good. It wasn’t so bad after the match,” Cilic said. “We tried to take some fluid out overnight, and yesterday in the morning it was worse. The doctors and physios were trying to help as much as they could. They really did the best they could, really helped a lot.”

Cilic served to open the match against Federer, and both held to 2-2. Federer then broke twice to take the first set and then broke again early in the second to take a 3-0 lead.

After that game, Cilic walked back to his changeover chair and broke down, tearing up as he covered his head with his white towel.

“It was a mix of emotions. Obviously a little bit of a frustration that I had that, and also trying to focus on the other side,” Cilic said. “It’s a tough part when you’re in that kind of situation. You know there is not much possibility that you’re going to win. It’s just actually fighting it through.”

After the second set, Cilic called for a trainer and had his left foot re-taped.

Federer knew something was going on with Cilic, but he wasn’t exactly sure what.

“Because I didn’t know and I couldn’t tell, I just said; ‘Focus on your game. Focus on your match. Keep playing,'” said Federer, who won his eighth Wimbledon title and 19th major overall. “The good thing is I was already in the lead.”

Cilic came into the match one victory from his second major championship. Despite a 1-6 record in their previous seven matches, Cilic beat Federer in straight sets in the U.S. Open semifinals three years ago on his way to the title. Federer followed that up by defeating Cilic last year in the Wimbledon quarterfinals, but Federer is 35 and Cilic, at 28, is one of the biggest hitters in the game.

The injury, though, made Sunday’s match a veritable walkover.

“The first five, six games was really good tennis, exactly the way we were hoping, crowd was hoping, that it was going to be this great battle,” said Jonas Bjorkman, Cilic’s coach. “But unfortunately it was not meant to be. You could see he started not being able to push off as good and then he started giving us a little bit of a signal that it was not correct 100 percent again, so then obviously we knew that it was a problem.”

That problem never went away, but Cilic stayed in the match, trying to hold serve and struggling to even win one point when the ball was in Federer’s hand.

“I really wanted to give my best,” Cilic said, “to try as much as I could.”