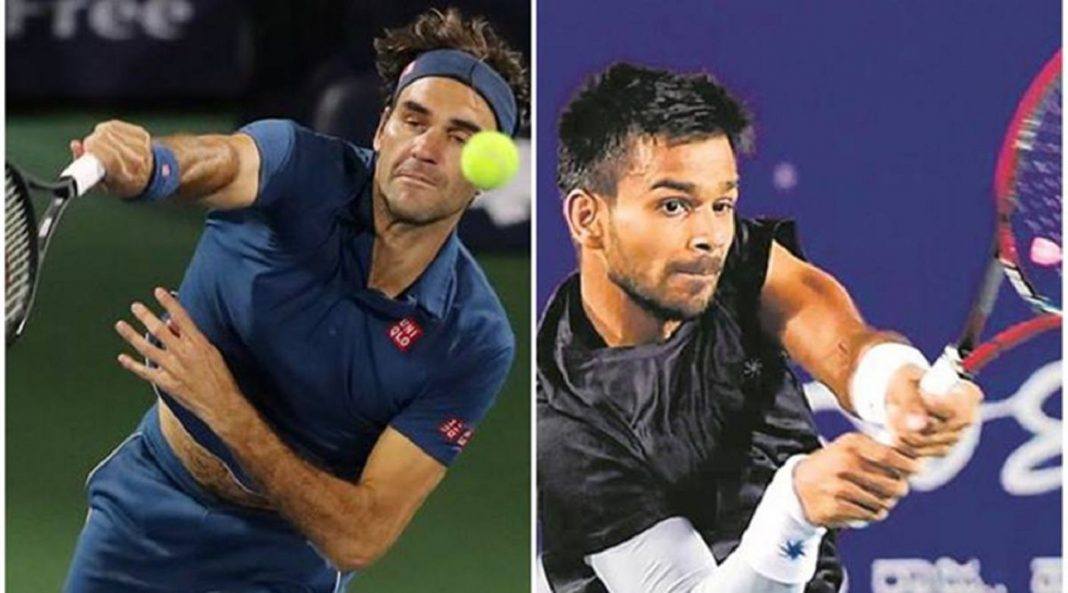 Roger Federer normally makes every game he plays look effortless, but he came up against one play who gave him quite the workout for his first round at the 2019 US Open. The Swiss maestro actually dropped the first set he played at this year’s U.S. Open — against someone named Nagal.

Federer shrugged off that slow start and came back for a 4-6, 6-1, 6-2, 6-4 victory Monday night against Sumit Nagal, a qualifier from India ranked 190th.

How did the 20-time Grand Slam champion deal with digging himself that hole?

“Just try to forget it,” Federer said during his on-court interview in Arthur Ashe Stadium. “Play tough. Stay with him. It was a tough first set for me. … Credit to him.”

When that first set ended, there were plenty of people looking on in disbelief — in Federer’s guest box, certainly; around the stands, of course; and in front of TVs at home, surely.

“People expect a different result,” Federer said. “I expect something else.”

This was not, after all, Rafael Nadal, someone Federer has never faced at Flushing Meadows but trails 24-16 head-to-head overall.

Instead, it was Nagal, who is now 0-5 in tour-level matches for his career, trailing Federer by 1,224 victories.

“It would have been a better story,” said Nagal, who now heads to Genoa, Italy, to enter a low-tier Challenge Tour event on red clay, “if I had got another set or more.”

Federer was a big part of what transpired in the early going: Of the 32 points Nagal won in the first set, only three arrived via his own winners. Of the other 29, 19 were thanks to unforced errors by Federer, and another 10 were forced errors off the Swiss star’s racket.

One particular issue was Federer’s serve: He won merely seven of his initial 20 second-serve points.

But he returned well throughout, breaking in Nagal’s first service game of every set, and eventually, the rest of Federer’s game came around, too.

“Maybe it’s not a bad thing to go through a match like this,” said Federer, who has now won his past 62 first-round Slam matches. “It was very similar at Wimbledon.”

That’s true. He ceded his very first set at the All England Club in July, then wound up making it all the way to the final — even holding championship points before eventually losing to Novak Djokovic in a fifth-set tiebreaker.

Nagal soon saw a better Federer than was present at the outset Monday.

“He loves putting pressure on the other guy. The thing with him is you don’t know what type of shot (he’ll play),” Nagal said. “He’s always making you think. … You have no idea where the ball is coming back.”

Venus Williams still loves her job. And she’s still capable of doing it rather well.

Playing in the U.S. Open for the 21st time, tying Martina Navratilova’s record, Williams improved to 21-0 in first-round matches at Flushing Meadows by beating Zheng Saisai 6-1, 6-0 in all of 66 minutes in Louis Armstrong Stadium on Monday.

“I was happy with today,” Williams said, “so I’m not going to ask for more.”

Williams is a two-time champion in New York — back in 2000 and 2001 — and owns seven Grand Slam singles titles in all, along with another 14 in doubles. But she’s also 39, had lost in the first round at the French Open and Wimbledon this year and her ranking is down to No. 52. That puts her 14 spots behind Zheng.

Sure didn’t seem that way on this afternoon. Williams dominated from beginning to end, winning twice as many total points, 58-29, compiling more than four times as many winners, 25-6, and two fewer unforced errors than her opponent.

Williams also showed off her big serve, reaching 121 mph, and set up a match against No. 5 seed Elina Svitolina next.

For years, as her ranking has slipped further away from the No. 1 spot she once briefly held, and her results have been less than what they once were, Williams repeatedly has faced questions about whether she was considering retirement. She never really paid any heed to that, often saying that she feels she has more to give to the sport.

And Monday, she sure looked and sounded as if she still does.

“It’s a wonderful job, and it’s all-consuming. So if you don’t love it, it’s really hard to do well at it,” Williams said. “And the fact that I have done well has shown that I have loved it and will love it and I’ll always love it. Even when it’s all over, I’ll still be a tennis player.”

REILLY OPELKA DOES IT AGAIN

Reilly Opelka is making a habit of eliminating seeded players at Grand Slam tournaments. The 6-foot-11 (2.11-meter) American’s latest such win came in his main-draw debut at the U.S. Open, against No. 11 Fabio Fognini of Italy.

That 6-3, 6-4, 6-7 (6), 6-3 victory Monday on Court 17 came courtesy not so much of Opelka’s booming serve, although he did smack 26 aces, but his impressive performance at the baseline, including thanks to a backhand Fognini called “very strange.”

Opelka, currently ranked a career-high 42nd, acknowledged that his serve wasn’t at its very best, but said the victory “shows that I’ve got more than that to back it up.”

This follows a win over John Isner at the Australian Open in January and over three-time major champion Stan Wawrinka at Wimbledon in July, when Opelka reached the third round for the first time at a major.

The only real slip-up by Opelka on Monday came when he served for the match ahead 6-5 in the third set. Still, after getting broken there and eventually dropping that set, Opelka recovered quickly to grab the fourth.

“Players like that,” Fognini said, “make you play badly and they put you under pressure.”

Angelique Kerber seems to alternate good Grand Slam years with bad ones. This was a bad one.

The three-time major champion and former No. 1 bowed out of the U.S. Open in the first round Monday, beaten by Kristina Mladenovic 7-5, 0-6, 6-4.

Kerber, who was seeded 14th, won more points, 105-93 thanks to the way she controlled the second set, but just couldn’t hang in there down the stretch.

In 2016, Kerber won the Australian Open and U.S. Open for her first two Slam titles. In 2017, though, she had a pair of first-round exits at majors. In 2018, Kerber won Wimbledon and reached another Slam semifinal. Now she’ll hope the pattern continues in 2020 after a disappointing 2019.

“Not really the best year for Grand Slams for me,” she said.