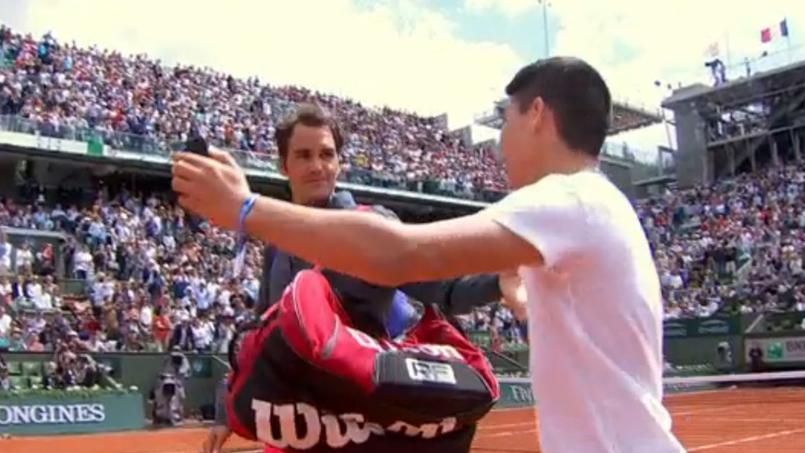 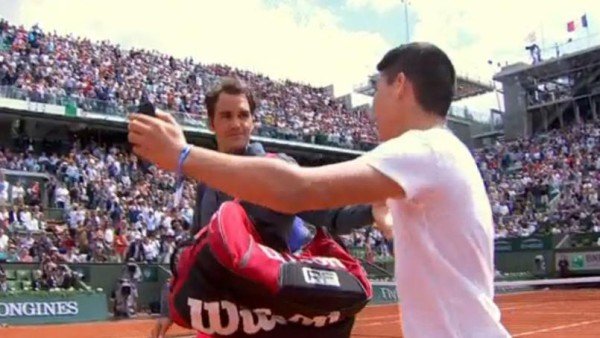 Roger Federer knows that if it weren’t for his fans, he’s be nothing, and he’s always gone out of his way for them, but on Sunday at the 2015 French Open, a line was most definitely crossed. A young teen was able to run out on the court after Federer defated Alejandro Falla 6-3, 6-3, 6-4 without any security on his tail. No one tried to stop him as he made it to Federer and took selfies with him while the Swiss Maestro held his composure but this incident obviously shook him up no doubt. And this was quite a long delay before any security came out.

Anybody would be furious at the horrendous default in security, especially in a city where just months ago terrorists killed eleven people in offices of the magazine Charlie Hebdo. If this kid had meant to harm Federer it was open season and no one would have been able to stop him until it was too late. 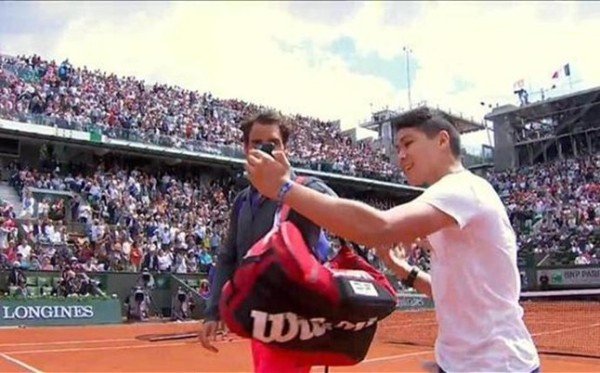 It was the latest in a series of security breaches at Roland Garros through the years, and Federer was quite rightly not amused.

“Obviously, not one second I’m happy about it,” he said, calling for immediate action from the French Open organizers. “Normally I only speak on behalf of myself, but in this situation, I think I can speak on behalf of all the players, that that’s where you do your job. That’s where you want to feel safe. And so clearly I’m not happy about it. But nothing happened. So I’m relieved, but clearly it wasn’t a nice situation to be in.” 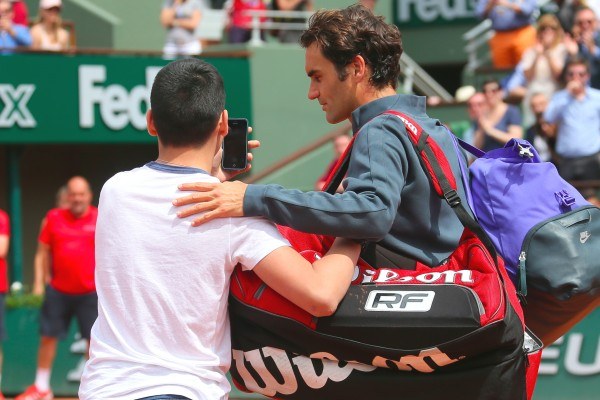 Gilbert Ysern, the French Open tournament director, apologized to Federer in the locker room after the match and later attributed the incident to “a lack of judgment” on the part of the security guards rather than a lack of proper security structure.

“What happened today does not show that the risk level is high,” Ysern said. “We’re talking about an error in judgment. The guards are well prepared. If a guy went running on the court with an aggressive attitude, he would not have made it to the player.”

At times on Sunday, Ysern seemed to play down the incident. “Of course, we should not make too big a case of that,” he said. “But it’s embarrassing, of course, for Roland Garros when something like that happens.”

At times he also seemed more concerned about underscoring the importance of the willingness of players from this generation to interact with youth than with focusing on the essential: player security.

But on balance, Ysern made it clear that Sunday’s incident, as innocuous as it turned out, was unacceptable. He said the young fan, who French news outlets reported is 14, had been barred from the remainder of the tournament.

“The court is sacred,” Ysern said. “It’s forbidden at any moment for any reason in any possible context to put so much as a toe on the court. All the spectators should know it.”

Above all, all the security guards should know it. Tennis history should be a constant reminder that such situations can turn out as anything but a joke.

It has been 22 years since Monica Seles, then the No. 1 women’s player in the world and the reigning French Open champion, was stabbed in the back on April 30, 1993, on a changeover in Hamburg, Germany, by a deranged German fan of Seles’s archrival, Steffi Graf.

The psychological damage proved greater than the physical damage, and though Seles did eventually return to the circuit and win the 1996 Australian Open, she was never the same irresistible force after the stabbing.

“There was clearly a before and an after Monica Seles,” Ysern said of security as he faced a room full of reporters on Sunday. “After that, all security in tennis stadiums and tennis courts was totally reviewed.”

That was certainly true, and yet there continue to be breakdowns in security involving both major stars and minor figures.

In 2009, the year Federer won his only singles title at the French Open, an intruder jumped onto the court in the middle of the final against Robin Soderling and tried force a hat onto Federer’s head as he sought refuge behind the baseline. Federer was rattled but was not nearly as critical of tournament organizers as he was on Sunday.

Ysern, who was also the tournament director in 2009, vowed then that no such breach would recur. And yet it did — four years later on the same court, when a protester carrying a flare jumped out of the stands during the 2013 men’s final between Rafael Nadal and David Ferrer.

Federer said he also had been approached by children on court during the traditional charity exhibition on Saturday at Roland Garros Stadium.

“Some children came onto the court, and nobody from security reacted,” he said. “It’s already happened to me twice in two days and in 2009 in the final as well. The reaction should be faster. It should, in principle, never happen.”

Federer said he was not concerned only about the French Open. “It’s for all the tournaments on the circuit,” he said. “It’s essential that the security team be well trained and know what it’s doing. Just wearing a suit and a tie is not enough. It’s not a joke.

“I am waiting for a reaction from the tournament. They have apologized. I appreciate that. But I want to see what happens from here.”

It might be tempting to think Federer is overreacting, and some other players adopted a much lighter tone on Sunday. When asked how he might respond to a court intruder, Ernests Gulbis, one of the game’s resident quipsters, answered, “If it’s somebody big, I’m going to run, and if it’s somebody smaller, I might stay.” It’s ridiculous to ridicule Federer for this as all it takes is for another tennis player to get hurt and then maybe someone will take security a little better.

But there should be no room for snap courtside judgments by security guards about whether a person walking onto the court is a real threat or an essentially harmless selfie seeker.

“He had a big scare here in 2009; we are certainly not going to blame the player for complaining about a security breach,” Ysern said of Federer. “We’re in a sport where there are no big fences, no barbed wire around the courts. There is no unpleasant physical barrier around a court. But it’s clear that we owe it to the players to give them peace of mind.”

For the moment, Federer, who knows Seles personally and routinely deals with big crowds and big excitement worldwide, does not have that feeling at Roland Garros.

“Just pure luck that nothing happened,” Thomas Johansson, the former Australian Open champion and Stockholm Open tournament director, said on Sunday. “Next time, the guy might have some bad intentions.”

It would be best, where the French Open is concerned, that there not be a next time at all.