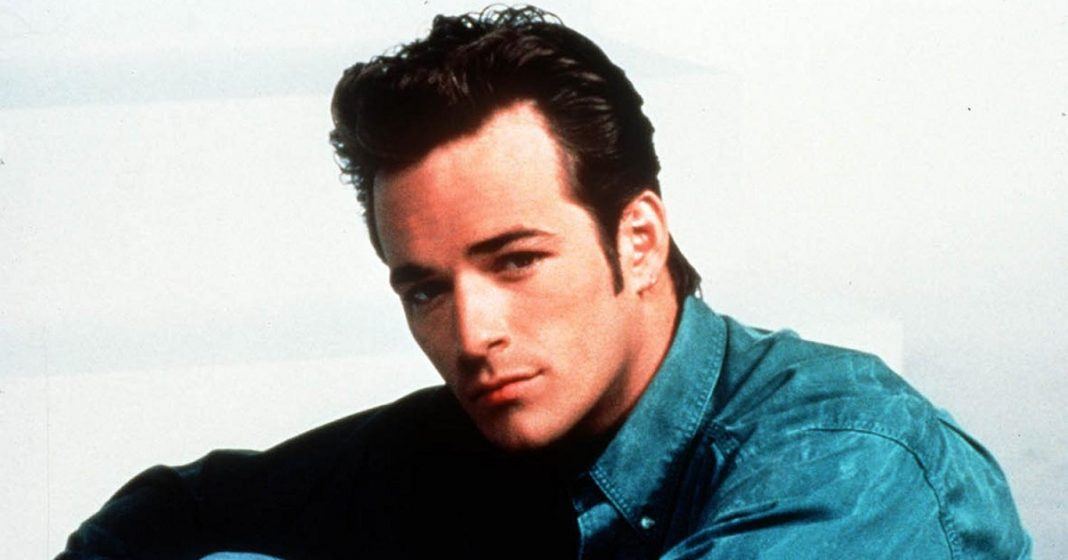 Luke Perry was a huge heartthrob back in the ’90s starring on the hit show “Beverly Hills, 90210,” and fans were shocked on Monday to find out he had died after suffering a massive stroke on Wednesday at the age of 52.

Perry, who gained instant heartthrob status as wealthy rebel Dylan McKay on “Beverly Hills, 90210,” died Monday after suffering a massive stroke, his publicist said. He was 52.

Perry was surrounded by family and friends when he died, publicist Arnold Robinson said. The actor had been hospitalized since last Wednesday, after a 911 call summoned medical help to his home in the Sherman Oaks section of Los Angeles.

“The family appreciates the outpouring of support and prayers that have been extended to Luke from around the world, and respectfully request privacy in this time of great mourning,” Robinson said in a statement. At Perry’s bedside were his children, Jake and Sophie; fiancée Wendy Madison Bauer and his former wife, Minnie Sharp. “No further details will be released at this time.”

Perry had played construction construction-company owner Fred Andrews, father of main character Archie Andrews, for three seasons on “Riverdale,” the CW series that gives a dark take on “Archie” comics. A fourth season has been slated.

Born in Mansfield, Ohio, Perry moved to Los Angeles after high school to pursue acting. His TV career began when he was 16, and the actor cut his teeth acting in soap operas like ABC’s “Loving” and “Another World” on NBC, and doing voice work for animated series such as “The Incredible Hulk” and “Biker Mice From Mars.”

However, in 1990 Perry became a household name for playing the brooding loner Dylan McKay on the smash hit teen drama “Beverly Hills, 90210” on Fox. The show became a phenomenon, catapulting Perry to full-blown teen idol status. He appeared on a racy Vanity Fair cover in July 1992.

Perry had two runs on “90210,” one from 1990 to 1995 and another from 1998 to the show’s end in 2000, during which time his character struggled with alcohol abuse and drug addiction, and went through a series of tumultuous relationships with several other main characters including Brenda (played by Shannen Doherty) and Kelly (played by Jennie Garth).

“I’m going to be linked with him until I die, but that’s actually just fine. I created Dylan McKay. He’s mine,” the actor once said about the career-defining role.

Ziering posted a photo of himself and Perry on Instagram on Monday with the caption, “Dearest Luke, I will forever bask in the loving memories we’ve shared over the last thirty years. May your journey forward be enriched by the magnificent souls who have passed before you, just like you have done here for those you leave behind. God please give him a seat close to to you, he deserves it.”

Perry’s 90210 co-stars, including Ian Ziering and Shannen Doherty, had taken to social media to share their public support after news of his hospitalization last week. Over the weekend, Doherty, who played his on-screen girlfriend Brenda Walsh early on in the Fox drama, said she had been in touch with the actor since his stroke. “I can’t talk about it here ’cause I will literally start crying but I love him and he knows I love him. It’s Luke, and he’s my Dylan,” she told ET over the weekend.

While starring in “90210,” Perry made a brief appearance as Billy Masterson in Luc Besson’s whacky sci-fi pic “The Fifth Element” in 1997. He co-starred in the quirky 2007 HBO series “John from Cincinnati” and had recurring roles on series including “Jeremiah,” “Oz,” and “What I Like About You.”

More recently, Perry made a successful return to the TV drama genre with a regular role on the CW show “Riverdale.” He played Fred Andrews, the conservative, old-fashioned yet soft father of the show’s lead Archie Andrews (KJ Apa). The show has shut down production for the day once they found out about Perry’s th.

Of his “Riverdale” role, Perry told media outlets in January 2017, “I like playing the dad because I like being a dad, and I think it’s a great character in the milieu of this show that I’m the grounded one, and I’m the guy who really cares about K.J., who cares about doing a good job and being a good construction worker. I love that.”

“We are deeply saddened to learn today about the passing of Luke Perry. A beloved member of the ‘Riverdale,’ Warner Bros. and CW family, Luke was everything you would hope he would be: an incredibly caring, consummate professional with a giant heart, and a true friend to all. A father figure and mentor to the show’s young cast, Luke was incredibly generous, and he infused the set with love and kindness. Our thoughts are with Luke’s family during this most difficult time.”

He will appear posthumously in Quentin Tarantino’s “Once Upon a Time in Hollywood,” playing the real-life Canadian-American actor Wayne Maunder who starred in the CBS Western TV show “Lancer.”

Perry is survived by his daughter Sophie and his son Jack, a professional wrestler who goes by the ring name “Jungle Boy” Nate Coy.

Hollywood has reacted in surprise and shock. His “Riverdale” co-star Molly Ringwald wrote, “My heart is broken. I will miss you so much Luke Perry. Sending all my love to your family.” The official Twitter account of the “Riverdale” writers’ room posted, “Luke Perry… you were a joyful and vibrant soul. You will be missed but most certainly your legacy will be remembered forever. Rest in love and peace, friend.”