Home Reviews Cool Stuff Reviews REVIEW: ‘Gears of War 4’ reminds us what we always loved about... 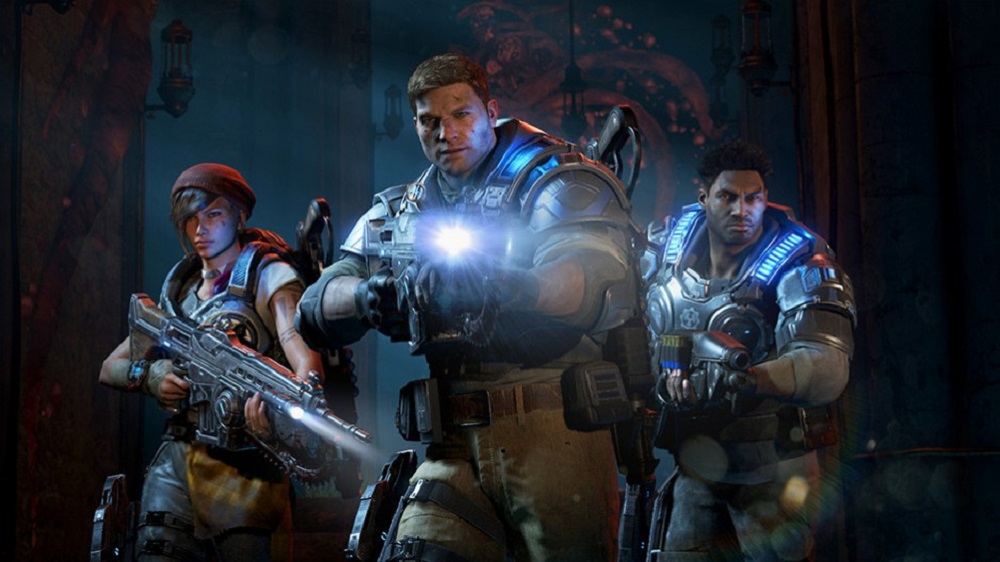 Gears of War 4 isn’t perfect, but the culmination of its remarkable graphics, enjoyable gameplay and non-fatal new additions is a riveting action experience that won’t soon be forgotten.

Ahead of Microsoft and The Coalition’s first standalone Gears of War entry (after the franchise was acquired by Epic Games), many fans were worried about the title’s quality, as well as the creative direction of the series. The development outlook of the studio that conceived and built the world-famous, Xbox-exclusive series would be non-existent during Gears of War 4’s production—and as video game, film, and television enthusiasts know, it’s often difficult to build upon the intellectual work of others, regardless of one’s talent and skill.

Fable’s slow demise, largely due to the creativity-killer of Microsoft’s quick-profit development requirements, added to skepticism amongst gamers.

Fans that were on-edge can rest easy and kick-back with Gears of War 4, as by and large, the pivotal series entry has turned out well.

The title’s campaign mode follows JD Fenix, son of Marcus Fenix, as he and his crew battle a new and more powerful force in place of the locusts, twenty-five years after the last game’s events. Gears games have never necessarily been known for their world-class writing, and the point holds true here, but perhaps even more so than in prior entries; don’t play Gears of War 4 expecting a masterful and thought-provoking story to follow. On the contrary, the game is riddled with head-scratching moments, in between its relatively interesting dialogue. For example, a turning-point campaign scene arrives when one character is overpowered and kidnapped after battling a humongous, unknown monster with a knife—right after a sequence wherein guns were used the entire time! 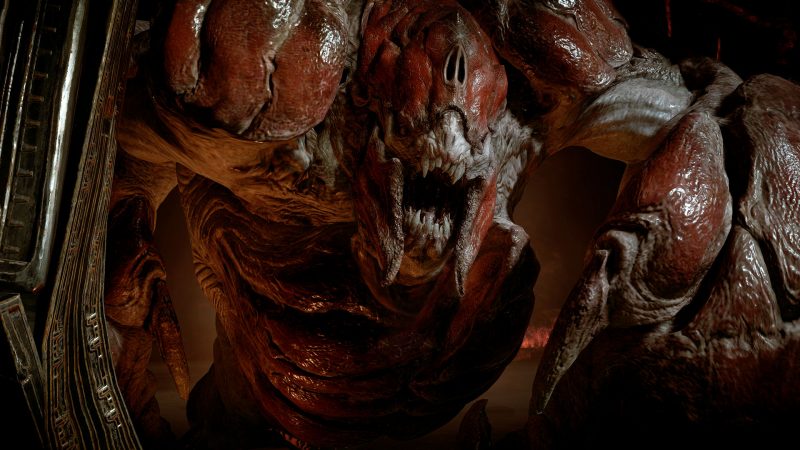 Where Gears of War 4’s campaign does shine is just about everywhere else, besides its story. Graphically stunning and incredibly pleasing to look at, the gorgeous world that’ll be traversed doesn’t look like it needs upscaling from the Scorpio, nor do its characters or animations. It’s clear that The Coalition kicked the generally dreary and dark color scheme of previous series entries out the window early in development because Gears 4 is remarkably vibrant.

Fancy, colorful graphics aren’t all there is to enjoy with Gears 4’s campaign. New enemies, weapons, and ways to attack assure that players will always be experiencing something fresh as they confront groups and groups of opposition. Admittedly, Gears of War 4’s story mode does become slightly repetitive at numerous points, as identical enemies pour out in droves and await their eminent demise. Weapons are largely relied upon to mix things up, and overall, they do so reasonably. Still, it’s clear that the impressive visuals and other game modes came at a price, as on more than one occasion, Gears 4’s story mode is a glorified Horde battle (in more than one sequence, players must actually complete a bit of Horde—not a variation of the mode, but legitimate Horde!).

The campaign is at its best when tackled with another player (online co-op works well), and overall, it’s a pretty good time. High-octane action sequences and ridiculously fun weapons help to overshadow the lowly writing and repetition of the experience, and what’s more is that this latter point is especially minimized because there’s an excellent chance most individuals will only play through the campaign in bursts, to leave room for Gears of War’s hallmark: multiplayer.

Specifically, the multiplayer component of Gears 4 is probably what most dedicated series fans were concerned about, prior to the title’s release. Online play is what’s propelled Gears to international fame, at least in part. Moreover, The Coalition had a deceivingly stiff challenge to conquer in not betraying the principles and elements that helped push Gears of War to such acclaim, while simultaneously building upon and expanding this foundation to craft a content-populated sequel.

The first way they did this was by expanding multiplayer game types. The expected Team Deathmatch, Guardian, Warzone, King of the Hill, and Execution modes are all present, and function excellently. New to the Gears experience are Dodgeball (an exhilarating team-based battle wherein five-by-five squads fight under Team-Deathmatch rules, except defeated players must sit out until a teammate kills an opposing member, like real-life dodgeball), Arms Race (a battle with every weapon in the game; both teams must accumulate a certain number of kills with each weapon before being allowed to move on to the next, and the first squad to do so with all weapons wins), and Escalation, a competitive, fast-paced ring-control variation. 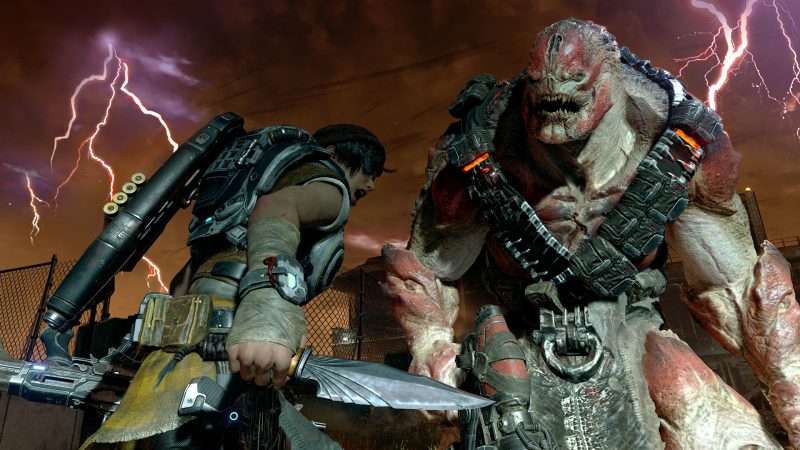 There isn’t any shortage of multiplayer gameplay in Gears 4. Now for the burning question: Is this multiplayer mayhem fair, balanced, and fun?

Yes, it is. It’s clear that The Coalition poured an astonishing amount of time and energy into balancing and polishing Gears 4’s online play. While it’s still based around the Gnasher shotgun, this entry’s multiplayer is more strategic and all-encompassing than in the past. Special weapons and shotguns aren’t the only viable means of offense, any longer, as the Hammerburst, Lancer, and Enforcer (a fast-shooting but inaccurate LMG) can stop enemies dead in their tracks. Other new forms of attack include shock grenades, incendiary grenades (in a larger quantity than we’ve seen in the past) the mulcher (also in larger quantity), the Buzzkill (a saw-blade-firing hell-raiser), and the EMBAR (an electricity-powered, timing-based sniper rifle). These are just some of the available weapons, and the point is that you’ll be trying out fresh equipment for a while.

Furthermore, while it’s a lot to digest, these weapons work surprisingly well together. Sure, new and experienced players alike will be killed with additional frequency—there are more ways to die—but, there are also more ways to kill. From around twelve hours of play, I can’t count how many times I’d seen a technically proficient team, with both Lancers and Gnashers, be blown away by a well-placed offensive featuring a Boomshot and a few shock grenades. Everyone’s got a chance at achieving multiplayer glory in Gears of War 4.

The biggest difference in the game’s maps, besides their colorful appearance, is their size. Multiplayer areas are much larger than in previous Gears titles, and teams have accordingly been upped from four players each to five. The obvious benefit of these enlarged maps is more room to maneuver, but in some instances, they will feel too big. Moreover, this point is especially apparent during King of the Hill matches, when a losing team’s hopes of stopping the opposing players from scoring will be dashed as they spawn too far away from the objective. The larger takeaway here is that the symmetrical maps of prior series entries are long gone, as are the universally acknowledged battle areas. There are more weapons to attack with and more places to attack, in Gears of War 4.

From a technical perspective, Gears 4’s multiplayer passes with flying colors. Quick play and core matches are easy to find, lag is nearly non-existent, and a newly implemented “damage indicator”, that shows how an opponent(s) inflicted damage, down to the amount of shots and the exact health percentage they absorbed, is very useful. Also included is how much damage was inflicted upon victorious players, while the defeated are respawning. This puts to rest the long-running criticism over Gears’s damage allocation, for the most part.

A number of weapon and player-skin customization options are available for purchase, either with in-game credits or real money. “Bounties” are also featured, and allow players to earn additional XP by completing certain challenge requirements (for example, scoring over 1500 points in a Team Deathmatch). These features, as most expected, are mainly cosmetic, and don’t add any depth to the game. Undoubtedly, the micro-transaction revenue they accumulate will be incredible!

Gears of War 4 also reinvents the franchise famous Horde mode, which got its start back in Gears 2. Now identified as ‘Horde 3.0”, it’s abundantly clear after just a little bit of play that the tacked-on “3.0” is more than just flash—this is the most in-depth, involved, and fun version of the already-fantastic mode released thus far.

The same core concept of the original Horde has remained intact: five players try their best to defeat increasingly large and powerful waves of monsters. But, several added elements create some real spice and variety in the gameplay.

First, the aforementioned larger maps make strategic play a must, and more pressingly; enemies can invade from every angle, and players will truly have to work as a team to succeed.

Next, players now have to assume the role of a class, each of which is equipped with special capabilities. The Coalition didn’t reinvent the wheel here—Soldiers are good at fighting, Engineers are good at building, and so on and so forth. To optimize a team’s chances of success, these classes must be evenly selected, to an extent.

As was said in the prior paragraph, the point worth emphasizing is that the days of one-man armies commanding entire Hordes are in the past. The team-based mode must now be enjoyed—and conquered—with other players.

Technically speaking, Horde 3.0 functions impressively. Online lag is once again minimal, the enemies rarely get stuck or disappear, and the culmination of these points is a style of play that will be appreciated for many years to come. It does get repetitive fairly early on, but that’s not the developers’ fault; the entire mode’s appeal is the opportunity to wade off waves and waves of enemies. When experienced in moderation, the new Horde mode is a lot of fun.

Gears of War 4 isn’t perfect, nor does it truly revolutionize any one of its featured elements. It doesn’t alter multiplayer gaming forever, and it isn’t a life-changing or masterful experience. What it does successfully do, overall, is manage to not mess up a billion-dollar franchise. This is meant in the most positive terms possible, as adding to someone’s already-crafted work on such a large stage is arguably more difficult than creating a project from the ground up. In the process of doing so, The Coalition has succeeded, and evidence of their triumph, in between all the complaining over online mechanics, is the fact that gamers keep coming back to play Gears of War 4.

Gears 4 is a carefully crafted entry, and fans of the series will be fighting Hordes, attacking other players, and having an awesome time doing so for many years to come. If you’ve not gotten your hands on it yet, check it out here.