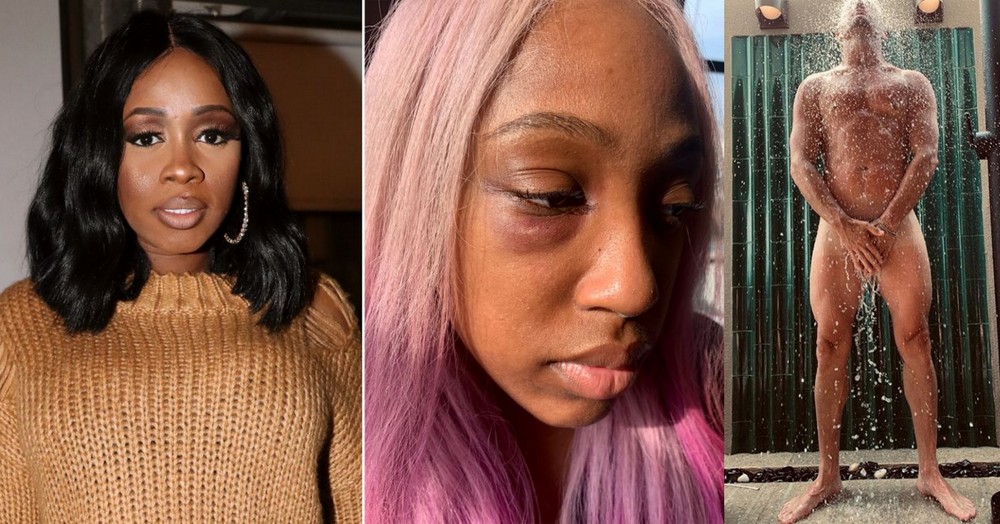 Both Remy Ma and actor Rick Schroeder were arrested for assault while Channing Tatum showed off the goods after losing a bet to girlfriend Jessie J.

Police say the 38-year-old rapper, whose real name is Reminisce Smith, turned herself in on Wednesday. She’s accused of punching her “Love & Hip Hop New York” co-star Brittney Taylor in the face during an April 16 concert at Irving Plaza in Manhattan.

Police say the victim reported the incident the next day and claimed she sustained bruising to her right eye. Her attorney, Sanford Rubenstein, said Taylor has confidence in the system and “will continue to fully cooperate with the authorities.”

Reality TV star Brittney Taylor told cops last month that Ma punched her in the right eye April 17 at the venue near Union Square. Taylor, an up-and-coming rapper herself, was treated at Mount Sinai Hospital.

“This arrest demonstrates how serious this matter is, it is real life and not reality TV entertainment,” said Taylor’s attorney Sanford Rubenstein.

The women were both on season eight of VH1’s “Love & Hip Hop: New York.”

Ma served six years in jail for shooting a former friend during a dispute in 2007.

Looks like Channing Tatum doesn’t back down from a bet.

The “Magic Mike” actor, 39, posted a naked photo of himself on Wednesday, explaining that the sexy post was the result of losing a game of Jenga to girlfriend Jessie J.

“I lost a game of Jenga to Jessica Cornish,” he wrote using the singer’s full name. “The loser (me) had to post a picture the other person (Jessica Cornish) picked… Smh and fml… I’m never playing Jenga with her ever again…”

He cheekily gave the “Burnin’ Up” singer, 31, photo credit and she commented, “sharing is caring,” with flame and heart eyes emojis.

The photo had over 600,000 likes within a half-hour of being posted.

The couple, who has been romantically linked since October, have no problem showing affection for one another on social media.

For Jessie J’s birthday in March, Tatum wrote, “You came into this world on this day and lit it on fire. You have blessed our eyes, our ears, our hearts and our lives. So thank you for just being you. You are so very special. Happy birthday Baby.”

The actor split up with Jenna Dewan in April of last year after nearly nine years of marriage.

Actor Rick Schroder has been arrested on suspicion of domestic violence for the second time in a month.

Los Angeles County sheriff’s Deputy Juanita Navarro says deputies were called to Schroder’s home near Malibu early Wednesday and saw evidence of a fight between Schroder and a woman whose name was not released.

Schroder was arrested, jailed and released after posting $50,000 bond.

He was arrested at his home for a similar incident with the same woman on April 2.

As Ricky Schroder, he was a child star known for the TV series “Silver Spoons” and the movie “The Champ.”

As an adult, he was a regular on the police drama “NYPD Blue.”

An email to his publicist seeking comment was not immediately returned.

Schroder is 49 and divorced.

Jussie Smollett A No Show

Jussie Smollett’s publicist says the actor doesn’t intend to be at a hearing on whether a special prosecutor will be appointed to investigate prosecutors’ dismissal of chargesagainst him.

Smollett was charged with felony disorderly conduct over allegations he staged a racist and anti-gay attack on himself in January in downtown Chicago. Publicist Hilary Rosen’s comments came as Smollett’s attorney filed a motion to quash retired appellate judge Sheila O’Brien’s request to have Smollett appear Thursday in Chicago.

The Chicago Sun-Times reports that Smollett’s attorney argues that the actor has moved out of Chicago and returning would force him to take “additional security measures.”

Cook County State’s Attorney Kim Foxx is fighting the motion for a special prosecutor and trying to quash O’Brien’s subpoena for her to appear at the hearing.

“Happiness depends on your attitude, not on what you have,” the meme posted on Eason’s Instagram Stories Wednesday reads.

Despite confessing to shooting Evans’ dog, Nugget, after the animal allegedly snapped at the couple’s 2-year-old daughter, Ensley, it does not appear that Eason will endure any legal repercussions.

The Columbus County, North Carolina, Sheriff’s Office shared a press release that said police conducted a welfare check at Eason’s home Tuesday night at around 7:30 p.m, but officers found all of the human residents were fine. “There was no evidence to substantiate a further investigation,” the statement said.

“I dont give a damn what animal bites my baby on the face … whether it be your dog or mine, a dog is a dog and I dont put up with that s–t at all,” Eason captioned a video of the incident, adding, “Some people are worth killing or dying for and my family means that much to me.”

The public has since expressed its outrage over the dog’s murder online, and the sheriff’s office said in the statement that it directed all complaints to Columbus County Animal Control. However, a source at the Animal Control center told media outlets that it only handles complaints involving animals that are still alive.

While Eason shares positive messages on his social media, Evans expressed her sadness over the loss of her dog.

On Instagram, the reality star said she is “crying every day,” adding hashtags “#Broken” and “#Distraught.”

“We are dealing with this rough situation,” Evans also told Us Weekly. “I want to focus on what’s best for me and my kids. [Divorce is] in thoughts, but nothing is finalized.”